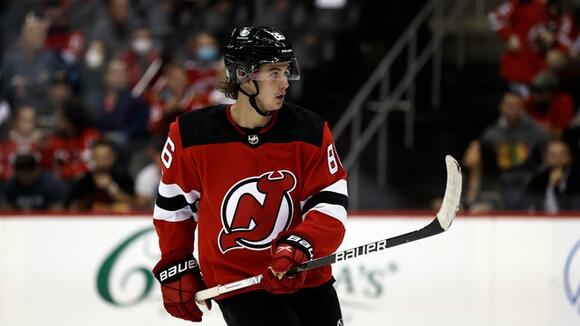 The New Jersey Devils have locked up their best player until the end of the decade, signing center Jack Hughes to an eight-year, $64 million contract extension.

General manager Tom Fitzgerald announced the signing Tuesday afternoon, hours before the Devils and Hughes were to face the San Jose Sharks.

Hughes is returning to the lineup after missing 17 games with a dislocated shoulder.

“It’s a fantastic day for the organization and for our team, and for Jack and his family,” Fitzgerald said shortly before Tuesday night's game. ”It's a win-win."

Hughes, the No. 1 pick overall in the 2019 NHL draft will earn an average salary of $8 million with the new contract. His salary over the deal will range from $9 million next season and dropping to $7 million in the final two years.

“I'm so excited to sign this deal for myself and for my family,” Hughes said. “I love being in New Jersey and I love playing in New Jersey. I wouldn’t want to play anywhere else, and we are really building something special. I believe in what we are doing here, and we have a great chance to be successful for a long time. This contract shows that this team is extremely invested in me and I’m also really dedicated to this organization.”

“We all know what Jack means to the team on and off the ice- he’s an unbelievable player and a fantastic person,” Blitzer said. “His future is incredibly bright and he will be a pillar for our franchise for years to come.”

The one thing the 20-year-old Hughes has not done is register a lot of points. That might be the byproduct of playing on weak teams. Fitzgerald added that Hughes' style of play is to be admired and followed by his teammates.

Hughes has two goals and one assist in two games this year. In his first two seasons, along with the two games played this year, he has 55 points (20 goals, 35 assists) in 119 NHL games.

Hughes finished second on the Devils in points last season, and led the club with 142 shots on goal. He was the only forward who played in all 56 games.

Hughes represented the United States twice at the world juniors in 2018 and 2019.

“He’s a great player and we think he can be one of the elite players in the league,'' Fitzgerald added. ”As he grows and develops and matures as a player, the sky’s the limit.”

Hughes' younger brother, Luke, was New Jersey’s first-round selection, and the fourth overall in the 2021 NHL draft. The defenseman is currently playing at Michigan. His older brother, Quinn, is a defenseman for the Vancouver Canucks.

WARNING: The video posted above may be too disturbing for some viewers. The New Jersey Office of the Attorney General has released new video from a deadly shooting in Cumberland County involving police officers. The shooting happened last month on West Park Drive in Vineland. It started with a 911...
VINELAND, NJ・5 DAYS AGO
News 12

Detectives have identified the man killed a car crash in Medford on Jan. 4. Police say the victim has been identified as 29-year-old Saul Lozada, of Patchogue. The incident happened at the intersection of North Ocean Avenue and Masonic Avenue at around 10:20 p.m. Lozada was crossing the street when...
PATCHOGUE, NY・6 DAYS AGO
Yardbarker

The New Jersey Devils’ 2021-22 season would probably look a bit different right now had Jack Hughes not dislocated his shoulder in the second game of the season. That forced him to miss 17 games, and the team certainly felt his absence. Even once he returned, it took him some time to get up to speed, which made matters worse for a Devils team struggling mightily.
NHL・1 DAY AGO

Hughes' confidence growing with Devils ahead of first All-Star Game

"I'm really happy to be going and representing the Devils," Hughes said. "It's different, I missed 17 games, you know? But I've been playing really well, so I'm glad I got that recognition. They brought me here to make All-Star Games and do things like that. So to be a part of that now is pretty fun."
NHL・1 DAY AGO
Sportsnaut

The NHL season officially started back on October 12. In this article, we track all the NHL games today as
NFL・7 HOURS AGO
Sportsnaut

Now that the 2021-22 season is about half of the way through, and Covid is ravaging many clubs, it’s time
NHL・23 HOURS AGO
News 12

Police: 7-year-old girl in critical condition after being found unresponsive in Melville pool

A Waterbury middle school teacher is accused of leaving two children home alone while she traveled out of the state, police say. Police say she was responsible for the children who are both under 12 years old. She was charged with risk of injury to a minor. Caviasca teaches at...
WATERBURY, CT・1 DAY AGO
News 12

A student of Lehman College has been identified as one of the victims of the tragic fire in Fordham Heights that killed 17 people on Sunday. Sera Janneh, 27, was a sophomore at the school majoring in psychology, Lehman College announced Wednesday. "Our deepest condolences to the Janneh family and...
BRONX, NY・7 DAYS AGO
Sportsnaut

If you’re looking for fantasy hockey tips for the games ahead, you have come to the right place. As the
NHL・1 DAY AGO
News 12

Police arrested and charged a man accused of killing a teenage cashier at a Burger King in Harlem. News 12 was told 30-year-old Winston Glynn is facing charges including murder, robbery and criminal use of a firearm. Police say the suspect pulled a gun on 19-year-old Kristal Bayron-Nieves during an...
QUEENS, NY・4 DAYS AGO

Police have identified a motorcyclist who was killed in a crash in Commack Friday night. Suffolk police say 63-year-old James Coogan, of Commack, was riding a motorcycle northbound on Harned Road when his bike crashed around 7:20 p.m. Coogan was pronounced dead at the scene. The motorcycle was impounded for...
COMMACK, NY・4 DAYS AGO
News 12

Police have released video of a shooting in the Grand Concourse section of the Bronx Thursday afternoon. The video shows a group of men running in the area of 1403 Grand Concourse. The group ran through cars and a busy intersection, and that's when another suspect wearing a black and red hoodie armed with a gun started firing shots.
BRONX, NY・1 DAY AGO
News 12

Prayers and the compelling need to bury the dead filled a Bronx mosque Wednesday, as a bereaved community began saying goodbye to those lost in New York City’s most devastating fire in decades. Among those still awaiting funeral rites are a 2-year-old boy, a mother who died with three...
BRONX, NY・6 DAYS AGO
WEEI Sports Radio

Carolina Hurricanes forward was asked on Tuesday if he sees similarities between himself and Boston Bruins star Brad Marchand. Marchand responded by saying that’s like “comparing a Lambo to a Prius.”
NHL・22 HOURS AGO
News 12

State police say a 4-year-old girl died after she was injured in a car crash in Flanders on Thursday. They say the girl’s mother, 34-year-old Amy Weselowski, caused the crash. The Riverhead woman admitted to police that she took Suboxone and Adderall. Weselowski was also driving with a suspended...
FLANDERS, NY・1 DAY AGO
News 12

STORM WATCH: Temps dive ahead of coastal storm this weekend

There is a storm watch in effect now through 12 p.m. Monday ahead of the weekend storm. Friday will feature morning clouds giving way to some sunshine in the afternoon. It will turn windy and colder through the day. We will be watching a storm off the coast Friday, but...
LITCHFIELD, CT・5 DAYS AGO
USA TODAY

An 11-alarm fire destroyed a chemical plant in the city of Passaic on Friday night. The first started inside of Qualco Inc. on Canal Street around 9 p.m. The company makes chemicals used to treat pools and spas, according to its website. Bright orange flames and thick black smoke could be seen pouring out of the building.
PASSAIC, NJ・4 DAYS AGO