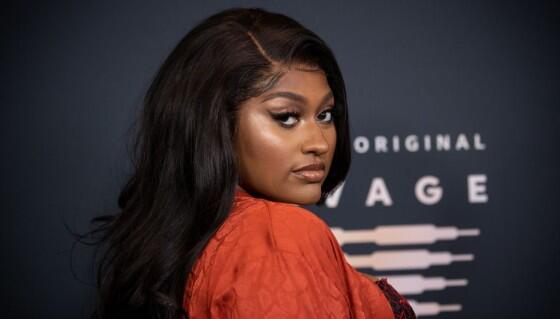 Grab your wallets, because Jazmine Sullivan is going on tour! The singer announced today that she’s slated to hit the road in support of her latest project, Heaux Tales, with shows starting in February 2022 and wrapping at the end of March.

Sullivan dropped the Heaux Tales project back in January 2021 and has had us all in a chokehold ever since with fans in love with the sultry album. The beauty took to Instagram today to officially announce the upcoming tour, posting a graphic of the tour dates while getting fans excited for the shows. “ Ask and you shall receive ,” she wrote as the picture’s caption. “The Heaux Tales Tour is finally here. I can’t wait to see all of you there.”

Check out the tour dates below.

Heaux Tales originally debuted at number one on the R&B Albums Chart, number two on the R&B/Hip Hop chart, and number four on the Billboard 200 chart. Earlier this year, Sullivan won the BET Award for Album of the Year and received three Grammy nominations for Best R&B Album, Best R&B Performance, and Best R&B Song for “Pick Up Your Feelings.” And most recently, the album was recently honored at the 2021 Soul Train Awards where the entertainer won the award for Album of the Year and Best R&B/Soul Female Artist. When accepting the honor, the “Need You Bad” singer said, “I wrote this project for women to love themselves, no matter what stage of life that they’re in. You have to love yourself. Especially because society would have us – and especially Black women – not love anything about ourselves. So I realized I can’t just talk about it. I got to be about it.”

Check out a snippet of her heartfelt acceptance speech below.

Tickets for Heaux Tales go on sale this Friday at 1 0am local on LiveNation.com

Jazmine Sullivan Is The Style MVP Of Super Bowl LV

Jazmine Sullivan Does The Big Chop

This interview is the perfect prelude to Jackson's upcoming Lifetime documentary, 'Janet'.
CELEBRITIES・6 DAYS AGO
wedr.com

Lil Durk is hitting the road in the spring to promote his upcoming seventh studio album, 7220. The "Voices of the Heroes" rapper will kick off the trek April 8 in Phoenix, and perform in a total of 17 cities, including Atlanta, Houston, Los Angeles and Miami. The tour will wrap up May 2 in his Chicago hometown. Tickets are now on sale on Ticketmaster.com. Last year, Durk was featured with Coi Leray on Lil Baby's The Black Outside Tour.
MIAMI, FL・3 DAYS AGO
Classic Rock Q107

Spoon have announced an upcoming run of U.S. shows in support of their upcoming album, Lucifer on the Sofa. The tour will launch on Feb. 8 in Santa Ana, Calif., three days before the release of the LP on Feb. 11, and wrap up nearly four months later in Phoenix.
MUSIC・4 DAYS AGO

Country artist Travis Tritt has announced 2022 tour dates. Tritt’s ‘Set In Stone Tour’ is named after his album released last year, which was the country singer’s first full-length project in over a decade. The Set in Stone Tour is set to start on March 11th...
CELEBRITIES・10 DAYS AGO
brooklynvegan.com

Converge announce tour with Full of Hell, Uniform, and Thou

Converge have announced a headlining March tour with truly amazing support coming from Full of Hell, Uniform, and Thou. The band says "the order in which the support bands will appear will change every night— attendees should arrive to the shows early to ensure seeing every band." The tour...
MUSIC・10 DAYS AGO
Outsider.com

Bluegrass star Billy Strings announced a short Spring 2022 Tour on Tuesday (1/4). The musician announced with stops in California, Las Vegas, Texas, and Florida. The Michigan native wraps up the short tour with a three-day visit to the legendary Ryman Auditorium in Nashville at the beginning of May (6,7,8).
ENTERTAINMENT・13 DAYS AGO
HelloBeautiful

Former 'Love & Hip Hop Atlanta" star Erica Dixon is being called out after questioning if a straight men complimenting another man is a "red flag."
CELEBRITIES・18 DAYS AGO

Megan, 35 - who has Noah, nine, Bodhi, seven, and Journey, five, with her ex-husband Brian Austin Green - loved the proposal and "thought it was beautiful and perfect". The insider told People: "She is excited to get married." The loved-up duo first started dating in May 2020 after meeting...
CELEBRITIES・4 DAYS AGO
HelloBeautiful

Mary J. Blige took to Instagram to debut her new, platinum blonde braids in a glamorous selfie and we're loving the look!
CELEBRITIES・21 DAYS AGO
HelloBeautiful

Danielle Brooks Weds Fiancé In A Gown Designed By A Black Woman: ‘It Was Very Important To Me To Find A Black Wedding Dress Designer’

Danielle Brooks wed her fiancé, Dennis Gelin, in a lavish ceremony where she donned a gorgeous wedding dress by Black-female designer, Oluwagbemisola Okunlola.
CELEBRITIES・4 DAYS AGO

Congratulations to Mimi Faust and Ty Young as the couple reportedly got engaged again last night after rekindling their love late last year.
CELEBRITIES・8 DAYS AGO
Us Weekly

It’s Kody Brown‘s rules — and the others are just living by them. During the Sunday, December 26, episode of Sister Wives, that’s exactly what Robyn Brown tries to explain to Janelle Brown, Meri Brown and Christine Brown. In Us Weekly‘s exclusive sneak peek of the...
FAMILY RELATIONSHIPS・26 DAYS AGO
shefinds

Jimmy Fallon is the latest famous face to contract a breakthrough case of COVID-19, joining the likes of Hoda Kotb, Hugh Jackman, Whoopi Goldberg, Debra Messing, and LL Cool J, among others, who have recently tested positive for the virus. The 47-yea...
PUBLIC HEALTH・3 DAYS AGO
HelloBeautiful

Supa Cent Gets Real About Reconstructive Surgery On Instagram

Head inside for some awesome throwbacks and more recent shots, as we wish the icon a blessed day.
CELEBRITIES・4 DAYS AGO
HelloBeautiful

Blue Ivy is all grown up in this never-before seen photo with Mama Tina.
CELEBRITIES・10 DAYS AGO
Closer Weekly

Ever since they began dating in 2013, socialite Lauren Silverman has made her fiancé, Simon Cowell, feel like one lucky guy! Although fans never imagined it would happen, the beloved TV star found his one true love and has been living a life of bliss ever since. In January...
CELEBRITIES・5 DAYS AGO