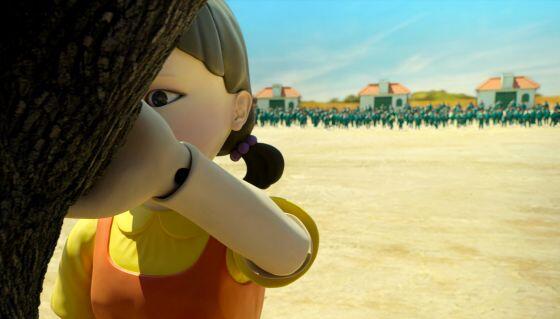 It would be an understatement to say the extremely viral Korean language Netflix series Squid Game has taken over America, creating a worldwide debate that made us all question what we would do if put in a similar scenario of survival.

One YouTuber managed to get the resources, funding and willing participants to embark on a real-life recreation of the epic cash competition that costed millions of dollars to make. Thankfully though for everyone involved, this version of Squid Game proved to be non-fatal — oh, and the winner was Black!

MrBeast of YouTube fame arranged the whole thing by dropping an astounding $3.5 million on production. Although the 456 competitors didn’t compete for ₩45.6 billion ($38.4 million) like the fictional characters on the show, the winner did receive an impressive $456,000 to make it out on top. According to MrBeast himself via Twitter , it took roughly $2 million to build and produce plus about $1.5 million for prizes. Each of the 456 contestants received $2,000 just for being included, and the runner-up got a cool $10,000. It appears the multiplayer online battle arena game Brawl Stars helped fund majority if not all of the cash.

Contestants played everything from the classic Red Light, Green Light game to the delectable Dalgona Challenge. To make things a bit more realistic without actually killing anyone, the Tug Of War and Glass Bridge challenges were both paired with a foam pit underneath and everyone wore non-fatal explosive packs on their chest that bursted open with fake blood when contestants were eliminated.

As far as the winner, Tryzon, he’s been celebrating on social media as he rightfully should. Congrats fam!

Watch the full version of the real-life Squid Game below, which currently has over 125 million views since being posted last week and should be a pretty nice pay day for MrBeast as well:

So when it’s something good, we celebrate him being black, but when it’s bad, (ie looting, rioting, murdering, carjacking, etc.) we don’t include the race. Got it.

what difference does his race make? the writer of this piece seems a little too color sensitive. I thought we were supposed to not judge according to skin tone.

In the US there are tons of food service workers who rely on gratuities from customers in order to make a livable wage. This means that a lot of servers feel the need to walk on eggshells when it comes to their interactions with whoever they're waiting on to ensure that they've got the highest possible chance of securing a fat gratuity.
TV & VIDEOS・1 DAY AGO
POPSUGAR

Squid Game actor O Yeong-su (O Il-nam aka Player 001) enjoyed a historic win at the 2022 Golden Globes on Sunday night! The 77-year-old actor scored an award for best supporting actor in a series for his work on the Netflix show. Yeong-su's win marks the first time a Korean actor has taken home a Golden Globe in the best supporting role category.
WORLD・11 DAYS AGO
Newsweek

The "Squid Game" character Gi-hun, player no. 456 from the first season, is expected to be the focus of the next season.
TV SERIES・23 HOURS AGO
The Hollywood Reporter

Mobile game company Rovio Entertainment revealed Thursday that new puzzle game Angry Birds Journey is now available on the Apple App Store and Google Play. The pick-up-and-play, story-driven game is designed to be accessible and fun for new players and those familiar with the franchise, first launched in 2009. “The love for the original slingshot gameplay is still strong after 12 years,” said Rovio CEO Alex Pelletier-Normand. “Today, with the global launch of Angry Birds Journey, we’re happy to present to players an all-new Angry Birds experience that puts the slingshot at center stage.” He goes on to say that the game is “much different from the classic games in its updated and streamlined gameplay,” but features familiar iconic characters from the franchise — that includes two animated feature films as well as multiple games, and later this month will also see a longform animated series land on Netflix. Rovio, both a developer and a publisher, is based in Finland and operates multiple game studios. View the trailer for Angry Birds Journey below.
VIDEO GAMES・2 DAYS AGO

"Rainbow Six Extraction" has been developed for playing with friends, but you can be a lone wolf if you want. Here's how to access this single-player mode.
VIDEO GAMES・1 DAY AGO
The Press

Squid Game is getting a second series

‘Squid Game’ has been renewed for a second season. The South Korean dystopian drama - which became streaming platform Netflix's most popular series on launch after reaching 214 million households in 2021 - has been greenlit for another installment following its huge global success. Ted Sarandos, Netflix's co-CEO and...
TV SERIES・20 HOURS AGO
Business Insider

The audience for DC content is a fraction of the audience for Marvel content, but "Peacemaker" still held its own compared to "Hawkeye."
TV SERIES・1 DAY AGO
The Independent

A woman has thanked one of her fellow gym members for not staring at her as she does squats, and she is sparking a debate on social media for doing so.In a TikTok video posted on 1 January, @libbychristensen was squatting on an exercise machine, as a man was sitting on a bench behind her. @libbychristensen ty for your service kind sir #gymtok #girlwholift #YerAWizard ♬ The Golden Girls - The Main Title Theme - TV Themes “I just need to shout out this man who was behind me while it was hack squatting bc I...
WORKOUTS・1 DAY AGO

THE bulked-up dog believed to be the world's "strongest" pup was born with a genetic mutation that gave her a bulging 24-pack and muscles like Arnold Schwarzenegger. But just like The Terminator star, Wendy the whippet was a gentle giant. Born with a rare genetic mutation, Wendy was twice as...
PETS・2 DAYS AGO
Insider

Dwayne 'The Rock' Johnson confirmed that he's not the secretive buyer of a $31.8 million T. rex after social-media rumors

Rumors that Johnson was the 2020 purchaser of one of the best-preserved T. rex skeletons in history started Monday after a TV appearance.
NFL・2 DAYS AGO
Radar Online.com

Jason Momoa's career skyrocketing and his inability to turn down a project was one of the factors that led Lisa Bonet to throw in the towel on her 17-year relationship. Sources close to the couple are spilling all the details about what went wrong days after the Hollywood couple shocked the world with their divorce announcement.
CELEBRITIES・2 DAYS AGO
The US Sun

Prince Andrew had personal ‘massage mattress’ he travelled with and hired girl to give him pedicures, pal claimed

PRINCE Andrew would travel abroad with his own personal massage mattress and hired a girl to give him pedicures, a pal claimed. The pampered prince is reported to have become increasingly concerned about preening himself as he "rediscovered his youth" in the early noughties. Pals at the time claimed the...
CELEBRITIES・18 HOURS AGO

"I will just say that he was simply larger than life and I will miss him every day for the rest of mine," Meat Loaf's daughter, Amanda Aday wrote on Facebook.
CELEBRITIES・16 HOURS AGO
Indy100

If you’ve ever wondered how a relationship can end in three seconds, keep on reading. One woman was left mortified by a string of text messages from her boyfriend. In them, he asked her to pop on some makeup because she was meeting his friends for the first time.
RELATIONSHIP ADVICE・1 DAY AGO
Creative Bloq

The new green M&M design is the worst thing that's ever happened, apparently

We never quite know what we're going to end up writing about on any given day here at Creative Bloq. Every morning we pour a coffee, log on and take a look at what in the world of art and design has got the internet talking. Could we have guessed that today's fierce discourse would concern the reverse-sexualisation of the shoes worn by an anthropomorphized green candy-coated chocolate? We could not.
DESIGNERS & COLLECTIONS・1 DAY AGO