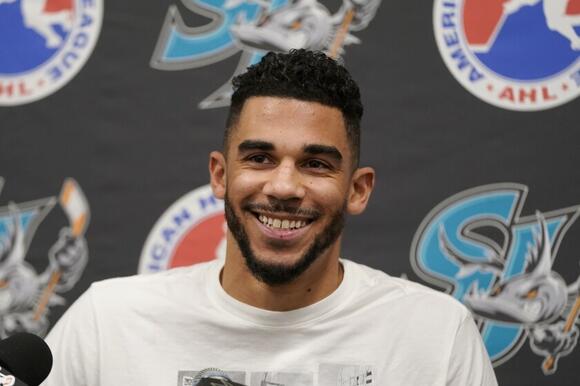 Evander Kane reported for his first day in the minors focused on doing what it will take to get back to the NHL instead of rehashing the allegations from the offseason that led to one of the league's top forwards being relegated to the AHL.

Kane's 21-game suspension for submitting a fake COVID-19 vaccination card has ended and he is trying to work his way back into shape with the San Jose Barracuda and prove himself worthy of another chance in the NHL.

“I came in today, the same person, same teammate, same player that I was and everything went great,” Kane said Tuesday. “I think there’s been a lot of misinformation that’s been said. But I can only control how I act and what I do here and that’s what I’m doing.”

Kane faced a litany of allegations this offseason which led to this stint in the minors, with the most serious in terms of hockey coming when his estranged wife accused him of betting on hockey games, including “throwing games to win money.”

The league launched an investigation into those charges and found no evidence they were true.

“It was definitely surprising to see,” he said. “But I genuinely was not worried one bit about it because they were obviously false. There were certain motives behind that that didn’t make sense at the time. But it wasn’t something I lost any sleep over. It was definitely not great to be associated with that at the time. But the league investigated me heavily and interviewed a bunch of different people.”

Kane was cleared the day before training camp started but never reported to camp because of additional allegations from Anna Kane of physical and sexual abuse.

The league couldn't substantiate those charges but did suspend Kane for the first 21 games when it determined he submitted the fake vaccine card.

Kane did not get into any detail on those issues other than to say he is now fully vaccinated.

But the Sharks are in no rush to bring the 30-year-old Kane back to the NHL despite the fact he was their most consistent performer last season, when he had 22 goals and 27 assists in 56 games for his highest points per game rate of his career.

The Athletic reported over the summer that there was a rift between Kane and his teammates, many of whom don’t want him back on the team.

Kane said he believes it was a “misconception” that there issues with so many players but also said he has had no contact with any of the players on the Sharks and said he didn't know if he'd ever play for them again.

Kane is owed $7 million a year through the 2024-25 season and has a modified no-trade clause that allows him to block a trade to all but three undisclosed teams.

He hired a new agent, Dan Milstein, in hopes of finding a trade that can get him back into the NHL soon but for now will bide his time in the minors.

“I’m under contract with Sharks,” Kane said. “They’ve sent me here. I have shown up and will continue to show up and I look forward to whatever it is to come.”

Being in the minors was a new experience for Kane, who went straight from juniors to the NHL after being drafted in the first round by Atlanta in 2009.

A player who spent much of his career skating on the top two lines in the NHL instead spent much of the practice skating with Kyle Topping and Steenn Pasichnuk, who are still hoping for their first NHL chance.

Barracuda coach Roy Sommer, who worked with Kane when he was on the Sharks staff in 2019-20, said he believes Kane will be on his best behavior because he knows that could expedite his return to the NHL.

Sommer said Kane's addition at practice Tuesday brought some added energy to the team and the coach isn't concerned about issues Kane may have had last season with his teammates and coaches.

“As close as that door is over there, it’s still a long ways away,” Sommer said of the separation between the teams that practice at the same facility.

“We have guys going back and forth all the time. But we don’t really go into their business too much and they don’t come into our business. You don’t see a lot of guys hanging around with the Sharks guys so it’s a short distance but a long ways.”

Following a promising stretch, the San Jose Sharks have struggled of late. Meanwhile, the Washington Capitals’ issues have spanned throughout
NHL・2 DAYS AGO
Vacaville Reporter

Evander Kane could soon be back in the NHL and his return still might happen with the Edmonton Oilers, one of the teams the Sharks are competing with for a playoff spot in the Western Conference. Interest between Kane and the Oilers remains strong, as the winger met recently with...
NHL・1 DAY AGO
prohockeyrumors.com

The Edmonton Oilers are expected to sign Evander Kane to a one-year contract, following the conclusion of the NHL’s latest investigation. According to Elliotte Friedman of Sportsnet, the free agent forward will now earn a prorated league minimum salary of $750K, plus a signing bonus of $625K. It will also include a full no-movement clause. Because the deal is being signed partway through the season, Kane’s cap hit will be just over $2.1MM and he will earn a total of $970K.
NHL・2 HOURS AGO
charlottenews.net

Evander Kane, the embattled NHL veteran whose contract with the San Jose Sharks was terminated earlier this month, is set to sign with the Edmonton Oilers, multiple reports said Thursday. The deal would be for one year and the veteran minimum of $750,000, with a signing bonus and a full...
NHL・1 HOUR AGO

Desperate Oilers decide signing Evander Kane is worth the risk

For those demanding moves from Oilers GM Ken Holland: be careful what you wish for. After the NHL concluded its investigation about Evander Kane and allowed him to become an unrestricted free agent, the Oilers made the highly questionable decision to sign him for the rest of this season. Out...
NHL・1 HOUR AGO
canucksarmy.com

Evander Kane has reportedly agreed to terms on a contract with the Vancouver Canucks’ Pacific Division rivals, the Edmonton Oilers. Daily Faceoff’s Frank Seravalli reported Thursday morning that the NHL would soon announce a decision as to whether or not Kane would be suspended for reportedly flying to Vancouver while COVID positive.
NHL・2 HOURS AGO
WFTV Channel 9 Orlando

AP source: Kane joining Oilers after being cleared by NHL

The NHL has cleared Evander Kane after an investigation into his cross-border travel during the holiday break, paving the way for him to join the Edmonton Oilers. A person with knowledge of the deal said Thursday that Kane has agreed to terms with the Oilers on a contract for the remainder of the season that comes with a $750,000 salary and $625,000 in bonuses. The person spoke to The Associated Press on condition of anonymity because the contract had not been announced.
NHL・21 MINUTES AGO

On the day that the NHL said it didn’t have enough evidence to punish him for allegedly misrepresenting his COVID-19 status before entering Canada in December, former Sharks wing Evander Kane reportedly agreed Thursday to a contract with the Edmonton Oilers. The Canadian website TSN reported that Kane will...
NHL・26 MINUTES AGO
CBS Sports

Evander Kane, a talented left wing whose actions forced the San Jose Sharks to waive him earlier this month, has potentially found a new home. The Edmonton Oilers are reportedly expected to sign the 30-year-old. The Sharks waived Kane with the intent to terminate the rest of his seven-year, $49...
NHL・1 HOUR AGO
NESN

It didn’t take long for Evander Kane to find his way back to the NHL. The controversial former San Jose Sharks winger has been the center of an immense amount of drama already this season. He was suspended for violating the league’s COVID-19 protocols by using a fake vaccination card and also has also has been investigated for alleged domestic violence and gambling on the NHL.
NHL・2 HOURS AGO
Yardbarker

Report: The Oilers are likely to sign Evander Kane if he’s cleared from disciplinary action

UPDATE — Jan 27, 9:45 MT. It looks like Evander Kane could be an Oiler by the end of the day on Thursday. Former NHL referee Tim Peel posted on Twitter that the wheels are in motion for the Oilers to sign Kane, a report that Frank Seravalli confirmed to be accurate so long as Kane is cleared of disciplinary action…
NHL・7 HOURS AGO

Sharks D Erik Karlsson has forearm surgery, out until mid-March

San Jose Sharks defenseman Erik Karlsson is expected to be sidelined at least two months after undergoing surgery to repair
NHL・2 DAYS AGO
93.7 The Fan

He said it initially it was a head-shot and after having time to watch it, Pens head coach Mike Sullivan questions why the league won’t punish the hit on Teddy Blueger
NHL・2 DAYS AGO
Sportsnaut

37-year-old center Jeff Carter came to the Pens in April, he’s made such an impression, he received a contract extension after 12 goals & 14 assists this year
NHL・1 DAY AGO
WFAN Sports Radio

With only eight games remaining between Thursday and the end of February, the Tampa Bay Lightning will look to get
NHL・1 DAY AGO