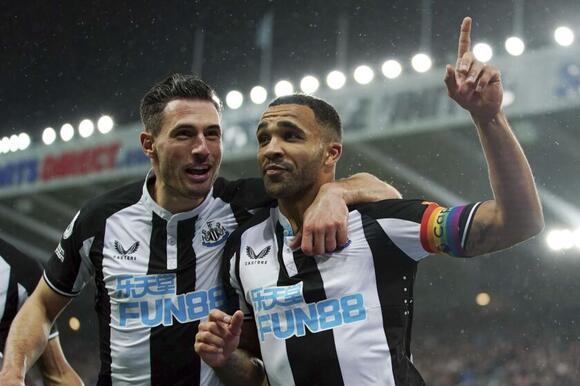 Newcastle was denied its first Premier League win of the season when Norwich striker Teemu Pukki equalized in the 79th minute in a 1-1 draw between the teams that started Tuesday as the bottom two.

Ciaran Clark’s straight red card for pulling back Pukki left last-place Newcastle having to play with 10 men from the ninth minute, yet the team that recently came under Saudi ownership still managed to take the lead.

Norwich midfielder Billy Gilmour’s raised hand blocked a header from Federico Fernández that was heading toward goal and, after a penalty was awarded following a VAR check, Callum Wilson converted in the 61st despite goalkeeper Tim Krul getting a hand to it.

Pukki earned Norwich a point by volleying home from Dimitris Giannoulis’ cross after Newcastle goalkeeper Martin Dubravka only palmed away a deep cross into the area.

Newcastle's winless start to the season extended to 14 games, with Eddie Howe's team on only seven points — three fewer than Norwich.

Norwich moved up one place to 18th, above Burnley, which has played two games fewer.

What the papers sayDonny van de Beek has rejected his reported loan deal to Newcastle from Manchester United, according to the Telegraph. The 24-year-old midfielder had been in the sights of the Magpies as they battle against relegation, but the club’s unstable position was also said to be what caused Van de Beek to turn the deal down.Newcastle have struggled with other transfer prospects too but, according to the Daily Express, the club is optimistic a deal for Sevilla defender Diego Carlos can be closed this week. The 28-year-old Brazilian reportedly wants to move to the Premier League and seems...
PREMIER LEAGUE・2 DAYS AGO
The US Sun

AARON RAMSEY has infuriated his bosses at Juventus by rejecting a move to Newcastle, according to reports. The Juventus outcast, 32, has made just one start this season and is not part of manager Max Allegri's plans. Ramsey has been identified by Allegri as an outgoing player but so far...
PREMIER LEAGUE・20 MINUTES AGO
The Independent

Newcastle have approached Manchester United about a loan deal for Jesse Lingard the PA news agency understands.The struggling Magpies have already spent around £37million this month thanks to their new owners, who are backed by the spending power of Saudi Arabia’s Public Investment Fund.Kieran Trippier has arrived from Atletico Madrid and striker Chris Wood joined from fellow relegation fighters Burnley, but Eddie Howe’s side are still looking to do January transfer business.Lingard is among those in Newcastle’s crosshairs, with the St James’ Park club making an approach about a loan deal for the England international.The 29-year-old enjoyed a successful...
PREMIER LEAGUE・3 HOURS AGO
The Independent

Newcastle once again find themselves pitched into the thick of a battle for Premier League survival despite their new-found status as one of football’s richest clubs.With 18 games to play and having won only one of their 20 league fixtures to date, the Magpies remain entrenched in the drop zone and although they have not been cut adrift, a continuation of their current form could prove fatal.Here, the PA news agency takes a look at some of the issues facing the club’s largely Saudi-backed owners as they attempt to protect their investment and bring their vast wealth to bear.What impact...
PREMIER LEAGUE・2 DAYS AGO

Derby manager Wayne Rooney is in contention for an emotional return to Everton after the former England star's impressive handling of affairs on the pitch despite a financial crisis at the Championship club. Rooney is among the bookmakers' favourites to take permanent charge at Goodison Park after Rafael Benitez was sacked on Sunday. The 36-year-old made his name at Everton as a precocious teenager before rejoining his boyhood club following a glittering spell at Manchester United. And, in his short time as a manager, Rooney has offered evidence that the potential return of the prodigal son would be more than just an olive branch to Everton supporters infuriated by the dismal reign of the despised Benitez.
PREMIER LEAGUE・18 HOURS AGO
The Guardian

Ralf Rangnick considers the issue with Anthony Martial “resolved” following talks with a player he claimed refused to be involved in Manchester United’s trip to Aston VillaUnited had two goalkeepers among their eight substitutes – one short of the number allowed – for Saturday’s 2-2 draw at Villa Park where the France international was conspicuous by his absence.Martial has made no secret of his desire to leave United this month but Rangnick’s claim that the forward “didn’t want to be in the squad” in Birmingham still shocked onlookers.The 26-year-old took to Instagram later that night to say he “will...
PREMIER LEAGUE・1 DAY AGO
San Diego Union-Tribune

Thomas Tuchel says Chelsea need to “recharge the batteries” after blaming tiredness for their lacklustre performance in the 1-1 Premier League draw at Brighton The European champions’ fading title hopes suffered another setback after Hakim Ziyech’s first-half opener was cancelled out by stand-in Albion skipper Adam Webster.Chelsea topped the table as recently as the start of last month but have spectacularly fallen out of contention having now won just two of their nine top-flight outings since.Blues boss Tuchel once again bemoaned his club’s punishing schedule and now plans to give his players two days off ahead of Sunday’s home game...
PREMIER LEAGUE・20 HOURS AGO
vavel.com

Norwich City 2-1 Everton: Canaries win to move to within a point of safety

Norwich City collect much needed three points thanks to an own goal from Michael Keane and a quick second from Adam Idah. Richarlison halved deficit for Everton with superb over head kick strike but not enough for a share of spoils. Story of the game. Coming into this fixture, Norwich...
PREMIER LEAGUE・2 DAYS AGO
The Independent

Chelsea boss Thomas Tuchel would settle for players returning from injury and illness ahead of new signings this month.The Blues have seen their title hopes founder in recent weeks amid a raft of players being unavailable, the most difficult of which to control have been for coronavirus-related reasons.Andreas Christensen became their latest player to test positive for Covid-19 ahead of Saturday’s defeat at Manchester City.While N’Golo Kante and Thiago Silva returned from isolation, Christensen’s absence exacerbated Tuchel’s problems with Trevoh Chalobah, Ben Chilwell and Reece James still out injured and Edouard Mendy at the Africa Cup of Nations.The situation has...
SOCCER・2 DAYS AGO
The Guardian

Norwich 2-1 Everton: The pick of the stats

Norwich have won two of their six Premier League home games under Dean Smith (drawn one, lost three), as many wins as they managed in their final 21 home games in the competition under previous manager Daniel Farke. This was Everton’s first away defeat against a team starting the day...
PREMIER LEAGUE・2 DAYS AGO
San Diego Union-Tribune

Brighton have promoted David Weir to the role of assistant technical director, working alongside the club’s technical director Dan Ashworth.Former Rangers, Everton and Scotland player Weir previously worked as Albion’s pathway development manager, overseeing players out on loan.Ashworth, who joined the Seagulls in 2019 having held a similar position at the Football Association has recently been linked with fellow Premier League clubs Newcastle and Everton.He said the new role was created due to an increase in his workload caused by various factors such as greater responsibility for women’s football and an expansion of player welfare, plus Brexit and the...
PREMIER LEAGUE・9 HOURS AGO
The Independent

Tottenham head coach Antonio Conte rounded on the Premier League for their handling of postponed fixtures.Conte described the league’s decision to accept Arsenal’s request to call off Sunday’s north London derby as “strange and surprising” as the Gunners only had one confirmed Covid-19 case, with most of their absentees due to injury and international duty at the Africa Cup of Nations.The Italian said the league should consider changing their schedule if they are going to start postponing games because of injuries.Conte said: “It was disappointing because we prepared the game to play against Arsenal and the decision to postpone the...
UEFA・1 DAY AGO