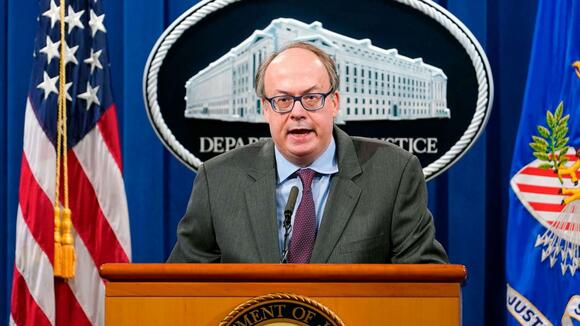 The House select committee investigating the Jan. 6 Capitol attack on Wednesday unanimously recommended contempt charges against former Trump Justice Department official Jeffrey Clark, even as panel leaders agreed to give him an opportunity to comply with their subpoena this weekend.

The last-minute development will delay a House floor vote to hold Clark in contempt of Congress and refer the matter to the Justice Department before Saturday, when he is expected on Capitol Hill to assert his Fifth Amendment privilege before the committee in person.

"This is, in my view, a last-ditch attempt to delay the Select Committee’s proceedings. However, a Fifth Amendment privilege assertion is a weighty one," Chairman Bennie Thompson, D-Miss., said Wednesday night, before the full committee vote.

"I have informed Mr. Clark’s attorney that I am willing to convene another deposition at which Mr. Clark can assert that privilege on a question-by-question basis, which is what the law requires of someone who asserts the privilege against self-incrimination. Mr. Clark has agreed to do so," Thompson said.

Unlike Trump adviser Steve Bannon, who was held in contempt of Congress by the House and charged by the Justice Department, Clark appeared before the committee with his attorney on Nov. 5, in response to their subpoena for records and testimony.

But he left after 90 minutes, after refusing to answer any questions, citing claims of executive privilege, which the committee has disputed, and Trump’s ongoing legal challenge to the panel’s inquiry.

Clark declined to answer direct questions about his knowledge of Georgia election law and his conversations with members of Congress, both of which committee members argued would not be covered by any claims of executive privilege.

The committee also sought to question him about Trump’s efforts to get the Justice Department to investigate baseless claims of election fraud.

Ahead of the Capitol riot, Clark played a prominent role advancing Trump's efforts to challenge the election results inside his administration. He circulated a draft letter inside the Justice Department to urge Georgia's governor and top Georgia officials to convene the state legislature to investigate voter fraud claims.

If people like Clark. Bannon, and possibly even Meadows refuse to be deposed or produce the relevant documents that've been asked for then obviously they've got something to hide. The excuse of 'executive privilege' isn't a good enough and the courts will attest to that. If any of these men had nothing to hide they would've answered questions and provided documents.

How does he get to claim executive privilege? What are they hiding in those documents that they would risk everything to be loyal to Trump, So they put Trump before their own family., That's what a half of a man would do.

The statement regarding pleading the fifth, “which is what the law requires of someone who asserts the privilege against self-incrimination.” says it all.

Ellis tweeted after being served a subpoena by the January 6 Committee investigating the Capitol attack.
POTUS・23 HOURS AGO
Washington Post

The Jan. 6 Committee Scores a Big Victory Over Trump

In a victory for the rule of law and the separation of federal powers, the Supreme Court said Wednesday that a bipartisan congressional committee investigating the Jan. 6 insurrection can review some of former President Donald Trump’s White House records. The documents may fill in some blanks about Trump’s...
POTUS・21 HOURS AGO
Fox News

The House committee investigating the U.S. Capitol insurrection is asking Ivanka Trump, daughter of former President Trump, to voluntarily cooperate with its investigation. The committee sent a letter Thursday requesting a meeting in early February asking to discuss her father's actions, including a telephone call they say she witnessed as he tried to pressure then-Vice President Mike Pence to reject the 2020 election results, among other issues. Ivanka Trump was an adviser to her father in the White House.
PRESIDENTIAL ELECTION・6 HOURS AGO
NBC News

WASHINGTON — The National Archives on Wednesday plans to hand over a small batch of documents from the Trump White House to the House select committee investigating the Jan. 6 attack on the Capitol. Acting Assistant Attorney General Brian Boynton said in a court filing Tuesday night that unless...
POTUS・1 DAY AGO

Trump had sought to block the documents by arguing the records should remain confidential so presidents can receive candid advice from aides.
PRESIDENTIAL ELECTION・1 DAY AGO
Fox News

The Supreme Court Wednesday denied former President Donald Trump's request for a court order to prevent the disclosure of privileged records to the House Select Committee to Investigate the January 6th Attack on the Capitol. The Court noted that the U.S. Court of Appeals for the D.C. Circuit, which upheld...
CONGRESS & COURTS・1 DAY AGO
The Guardian

The House select committee investigating the 6 January insurrection has issued subpoenas to ex-New York City mayor Rudy Giuliani, attorney Sidney Powell, and two other attorneys involved in ex-president Donald Trump’s push to overturn 2020 election results with nonsensical legal claims.Select committee chairman Bennie Thompson on Tuesday announced that he had issued the subpoenas for records and deposition testimony to Mr Giuliani and Ms Powell, as well as former Trump campaign legal advisers Jenna Ellis and Boris Epshteyn. Each has been ordered to produce documents to the committee by 1 February and appear a week later to give evidence...
U.S. POLITICS・2 DAYS AGO

The House minority leader, who helped scuttle an attempt to establish a bipartisan commission to investigate the insurrection, has spent months thrashing the select committee.
POTUS・7 DAYS AGO
POLITICO

Opinion | What Does the DOJ’s New Jan. 6 Sedition Indictment Mean for Trump?

There are certainly dots to connect between the White House and those charged with conspiracy, but is there reason to believe the department is actually closing in on the former president?. Ankush Khardori, an attorney and former federal prosecutor, is a Politico Magazine contributing editor. The latest development in the...
POTUS・6 DAYS AGO
Los Angeles Times

Mark Meadows, former chief of staff for the Trump administration, asked the Supreme Court Friday to hasten its decision on a suit filed by the former president that seeks to block a record request by the House committee investigating the Jan. 6 Capitol riot. Meadow’s attorney, George Terwilliger III, argued...
CONGRESS & COURTS・13 DAYS AGO
Fox News

Jan. 6 committee could get some Trump White House documents as soon as Wednesday

The disclosures could come even as ex-President Donald Trump pursues a Supreme Court challenge to block the release to the select House committee.
POTUS・1 DAY AGO
The Guardian

Stephanie Grisham gave more significant details than expected about what Trump was doing before 6 January, sources say
POTUS・17 HOURS AGO

Eric Trump and Trump Organization Chief Financial Officer Allen Weisselberg invoked their Fifth Amendment rights more than 500 times when questioned by the New York attorney general’s office for its investigation into the company’s finances, according to a Tuesday court filing. “Eric Trump then invoked his Fifth Amendment...
POTUS・23 HOURS AGO
KCBD

(CNN) – The House committee investigating the Jan. 6 attack on the U.S. Capitol has subpoenaed and obtained phone records for former President Donald Trump’s son Eric and Kimberly Guilfoyle, who’s engaged to Donald Trump Jr. In a marked escalation of the investigation, this appears to be...
U.S. POLITICS・1 DAY AGO
Newsweek

Katrina Pierson allegedly made the remark in text messages obtained by the January 6 Select Committee.
PRESIDENTIAL ELECTION・4 HOURS AGO
Newsweek

A VHA pulmonologist said, "HR can't even seem to do the most minor functions ... "
POTUS・19 HOURS AGO