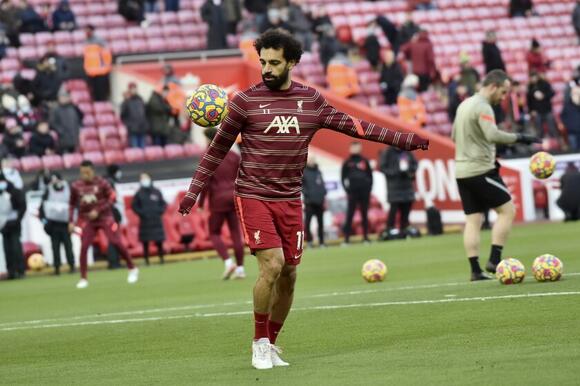 A look at what’s happening in European soccer on Wednesday:

Arriving with the best attack in the Premier League, Liverpool looks primed to pile on the misery for local rival Everton in the Merseyside derby at Goodison Park. Everton hasn't won any of its last seven games and the pressure is increasing on manager Rafa Benitez, who is taking on his former club. Meanwhile, Liverpool great Steve Gerrard could do his old club a big favor by leading Aston Villa, where he has recently taken over as manager, to a win over Manchester City, one of Liverpool's main title contenders. Second-place City is a point ahead of third-place Liverpool and a point behind Chelsea, which is also in action at Watford. Fourth-place West Ham is at home to Brighton, third-to-last Burnley looks for just its second win of the season in a trip to Wolverhampton, and Leicester travels to Southampton.

Spanish league leader Real Madrid can increase its advantage at the top when it hosts Athletic Bilbao in a match postponed from the ninth round. Madrid is four points clear from both Atlético Madrid and Real Sociedad. Madrid is unbeaten against Athletic in 12 league matches, with eight wins and four losses. Eighth-place Athletic hasn't won in five consecutive league matches. In the Copa del Rey, Sevilla plays at Córdoba, Real Sociedad visits Panadería Pulido and Real Betis plays at CFI Alicante.

After losing back-to-back Serie A matches, AC Milan will try to get back on track in the league when it visits relegation-threatened Genoa. Milan has slipped three points below league leader Napoli, which travels to Sassuolo. Inter Milan will be looking to take advantage of any slip up from the top two and hosts lowly Spezia. The defending champion is third, four points below Napoli. Also fifth-placed Roma visits Bologna.

It's Super Wednesday in Ligue 1 with 10 games in the evening. Leader Paris Saint-Germain will miss an injured Neymar when it hosts third-placed Nice. PSG will rely on Kylian Mbappe and Lionel Messi to crack the joint-tightest defense in the league. On a 13-game unbeaten run in all competitions, Rennes can consolidate second place against defending champion Lille. Expect goals in that game as it features Lille's Jonathan David, the league's top scorer, and Rennes' Gaetan Laborde, the second most prolific scorer. Marseille can make up ground in the race for Champions League spots with a win at mid-table Nantes. Lyon will host Reims without spectators after the league sanctioned Lyon for incidents at home on Nov. 21 when Dimitri Payet was hit on the head by a bottle of water thrown from the stands in a game that was abandoned.

A drone interrupted play at Brentford, we had a late, late winner at Old Trafford and Newcastle dug in for victory on an eventful afternoon
PREMIER LEAGUE・1 DAY AGO
San Diego Union-Tribune

Minute-by-minute report: Josh Sargent scored one of the goals of the season – if not the goal of the season – as Dean Smith’s team swept aside their relegation rivals. Scott Murray was watching.
PREMIER LEAGUE・2 DAYS AGO
The Independent

Liverpool hero Aldridge: Benitez was never going to be accepted by Everton fans

Here is how 10-man Gabon levelled against Burkina Faso and forced extra-time...
PREMIER LEAGUE・1 DAY AGO
The Independent

Liverpool have won each of their last nine meetings against Crystal Palace, scoring 29 goals in the process.Palace have conceded 13 times without reply in their last Premier League three games against Jurgen Klopp’s side - an awful run which includes the 7-0 defeat at Selhurst Park in December 2020.FOLLOW LIVE: Team news and all the action as Crystal Palace host LiverpoolBut this is a new and improved Palace team under Patrick Vieira. Although they may sit in an all too familiar position in mid-table, the quality of the football has significantly improved under the Frenchman.And they will be hoping...
PREMIER LEAGUE・1 DAY AGO

Crystal Palace manager Patrick Vieira was critical of the “naive” decision to award Liverpool a late penalty in their 3-1 home defeat.Odsonne Edouard’s 55th-minute tap-in had given the Eagles hope of taking points off Jurgen Klopp’s side, who started brilliantly in south London and scored twice in the first half through Virgil Van Dijk and Alex Oxlade-Chamberlain.A grandstand finish had been set up at Selhurst Park after Palace pulled one back but an innocuous coming together between Diogo Jota and Palace goalkeeper Vicente Guaita saw the Reds awarded a spot-kick, which Fabinho dispatched to put the game to bed a minute...
PREMIER LEAGUE・21 HOURS AGO
goal.com

Matchday LIVE: Chelsea take down Spurs as Liverpool, Barca and PSG all win

Well, what a day of football we've had to see out the weekend!. We've got our first AFCON quarter-final locked in between Burkina Faso and Tunisia, with Nigeria on the plane home. We've got another Chelsea victory over Tottenham, and large routine wins for Bayern Munich and Paris Saint-Germain, among others.
PREMIER LEAGUE・21 HOURS AGO
The US Sun

ASTON VILLA boss Steve Gerrard put the stare on Everton fans as he was jeered off the pitch at half-time. His side were 1-0 up thanks to Emi Buendia's header - but the home fans were more bothered about Gerrard's Liverpool legend status. As he made his way to the...
ASTON VILLA F.C.・2 DAYS AGO
The Independent

Everton goalkeeper Jordan Pickford believes the players are up for the fight as they find themselves mired in a relegation battle.The 1-0 defeat at home by Aston Villa was their 10th in 14 league matches and the slide towards the bottom of the table has become an unthinkable but glaring reality for a club who have not been relegated since 1951.With his side now just four points outside the bottom three, when the Premier League resumes after the international break caretaker manager Duncan Ferguson faces a must-win game at fellow strugglers Newcastle.The former Toffees striker, taking interim charge during the...
PREMIER LEAGUE・1 DAY AGO

Liverpool travel to Crystal Palace with the knowledge that anything but a victory will see their already dwindling Premier League title hopes well and truly go up in smoke.Jurgen Klopp’s side won 7-0 at Selhurst Park last season in a match which seemed to signal them as the best team in the league. They would go on to be swept aside by Manchester City before eventually finishing third.FOLLOW LIVE: Team news and all the action as Crystal Palace host LiverpoolThey are in danger of being swept aside already by Pep Guardiola’s men this season, so every game now becomes vitally...
PREMIER LEAGUE・1 DAY AGO
NBC Sports

Aston Villa beat Everton in a fiery battle at Goodison Park as Emiliano Buendia’s first half header gave Steven Gerrard the last laugh. After sacking Rafael Benitez last weekend, caretaker Everton boss Duncan Ferguson saw his side battle throughout but they lacked confidence and quality at the key moments.
PREMIER LEAGUE・2 DAYS AGO
The Independent

Virgil van Dijk insists Liverpool are paying no attention to Manchester City despite closing the gap on their Premier League title rivals.A hard-fought 3-1 win at Crystal Palace on Sunday lifted the Reds to within nine points of Pep Guardiola’s side, who were held to a 1-1 draw away to Southampton on Saturday.City have played a game more than Liverpool and the Merseyside outfit are set to visit the Etihad Stadium in April, leaving plenty to play for.“You can’t deny it’s in your mind, but as we have said many times we take it game by game,” Van Dijk said...
PREMIER LEAGUE・4 HOURS AGO
The Independent

Duncan Ferguson’s second spell as Everton caretaker manager got off to the worst possible start with the club facing a likely investigation into a bottle-throwing incident during the 1-0 defeat to Aston Villa.Former Liverpool captain Steven Gerrard’s first appearance at Goodison Park as head coach barely featured as a sub-plot with the focus all on the ex-Toffees striker taking charge following the sacking of Rafael Benitez.But, like many occasions during his playing career, it was Gerrard who left the ground smiling after Emiliano Buendia’s match-winning header in first-half added time.The Villa boss was less happy about the incident which saw...
PREMIER LEAGUE・2 DAYS AGO