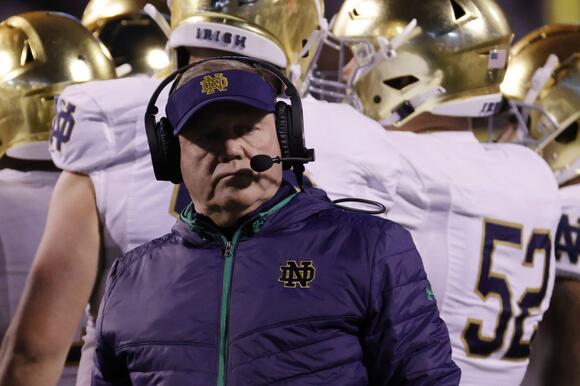 It was a shocking culmination to what has been a pretty darn successful run for Kelly in South Bend. Now, it has apparently turned ugly.

The ugliness started late Monday evening when Brian Kelly sent a text to his now-former Notre Dame players announcing that he was leaving the program effective immediately.

Said text came after the players found out via social media that the individual who recruited them to Indiana was cutting and running.

“Men…Let me first apologize for the late-night text, and more importantly, for not being able to share the news with you in person that I will be leaving Notre Dame. I am flying back to South Bend tonight to be able to meet with you in the morning, but the news broke late today and I am sorry you found out through social media or news reports.

I will have more to share when we meet tomorrow at 7 a.m. but for now, just know that my love for you is limitless and I am so proud of all that you have accomplished. Our program is elite because of your hard work and commitment and I know that will continue. I will share more in the morning when we meet. Again, my sincere apologies for not being able to be the one to share the news directly with you. Coach Kelly.”

How did Brian Kelly’s meeting with Notre Dame players go?

Well, it apparently lasted two minutes with Kelly not even answering a single question from his now-former players.

“Multiple sources indicated that Brian Kelly’s address to the team on Tuesday morning lasted less than two minutes, then he turned around and walked out. He did not take questions from the players,” Pete Sampson of The Athletic noted .

There has to be a certain feeling among Notre Dame players that Kelly betrayed them. It’s not about him leaving for another top-notch program. Rather, it’s all about the way he left South Bend.

The Irish sit at 11-1 on the season and could very well be headed to their third College Football Playoff appearance in four seasons. For a longtime head coach to leave in this manner without any further explanation and following a two-minute meeting can’t sit well with these players. 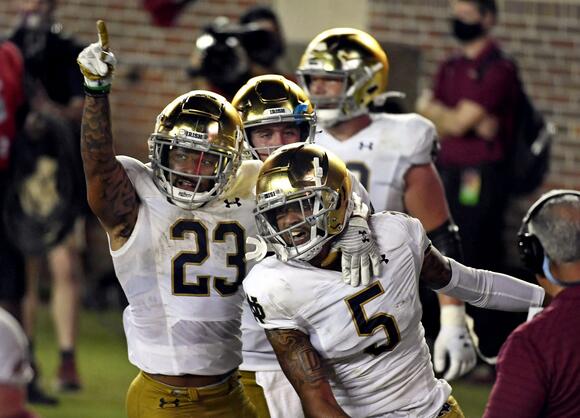 He might be a good coach. But as a person he is not. He left for more money.Which thats fine. But he should have stayed until the season was over. Thats greed

SELL OUT, COWARD, TOTAL DISAPPOINTMENT TO EVERY SINGLE NOTRE DAME PLAYER, AND STAFF FOR THE TEAM.I feel so sorry for everyone involved.Hey Kelly....hope you NEVER win another game, but the players still prosper.

He did the same thing to Cincinnati. Left a program before a big post season. I knew he was going to do it again. He is a good coach but a horrible person based on how he can just leave players who he recruited and developed them and that whole teams he left for no good reason. Them young men deserved better then that. For those who may disagree don't forget that money mostly come from those college kids that paid to be there regardless of scholarships, he did a horrible thing.

Syracuse and Clemson are slipping dangerously close to the bottom of the Atlantic Coast Conference standings, making Tuesday’s affair on
SYRACUSE, NY・5 HOURS AGO
Sportsnaut

Former Florida State quarterback Chubba Purdy announced Monday he is transferring to Nebraska. “Excited and Honored to be committed to
NEBRASKA STATE・3 HOURS AGO

Duke has discovered the joys of scoring close to the basket and it has proven quite beneficial the past couple
TALLAHASSEE, FL・19 HOURS AGO
Sportsnaut

The Las Vegas Raiders are expected to make a high-profile run at Michigan coach Jim Harbaugh, but has Rich Bisaccia
NFL・7 HOURS AGO
Sportsnaut

Gonzaga narrowly returns to No. 1 over Auburn

No. 3 Arizona’s surprising run into the top five following a 14-1 start to the Tommy Lloyd area could be
ARIZONA STATE・6 HOURS AGO
Sportsnaut

Georgia linebacker Nolan Smith announced Monday that he is returning for his senior season. The announcement stems the rash of
GEORGIA STATE・7 HOURS AGO
Sportsnaut

UCF coach Gus Malzahn announced Monday that his wife, Kristi, has been hospitalized with an infection. He did not reveal
SPORTS・10 HOURS AGO

Life in the Big 12 Conference means the windshield always has to be bigger than the rearview mirror, whether a
LUBBOCK, TX・19 HOURS AGO
Sportsnaut

No. 19 Ohio State takes a breather from Big Ten play Tuesday to host IUPUI in a game that wasn’t
COLLEGE SPORTS・6 HOURS AGO
Sportsnaut

No. 1 Baylor looks to get back on track at West Virginia

No. 1 Baylor will try to get back to winning when it squares off against West Virginia on Tuesday in
MORGANTOWN, WV・20 HOURS AGO
Sportsnaut

Northwestern coach Chris Collins felt his Wildcats “were on the doorstep” throughout a four-game conference losing streak. Perhaps there was
EVANSTON, IL・19 HOURS AGO
Sportsnaut

Michigan and Maryland square off, hoping for a turning point

Two months ago, Michigan was ranked No. 4 and Maryland was No. 20. Those were the good old days. Tuesday
ANN ARBOR, MI・5 HOURS AGO
Sportsnaut

No. 21 Texas should expect a different challenge than it faced three weeks ago when the suddenly erratic Longhorns play
AUSTIN, TX・19 HOURS AGO
Sportsnaut

Arkansas will try to keep running against South Carolina

When Arkansas hosts South Carolina on Tuesday, the Razorbacks will be looking to continue the run they had on Saturday.
ARKANSAS STATE・6 HOURS AGO