Clint Frazier reportedly closing in on deal with Chicago Cubs 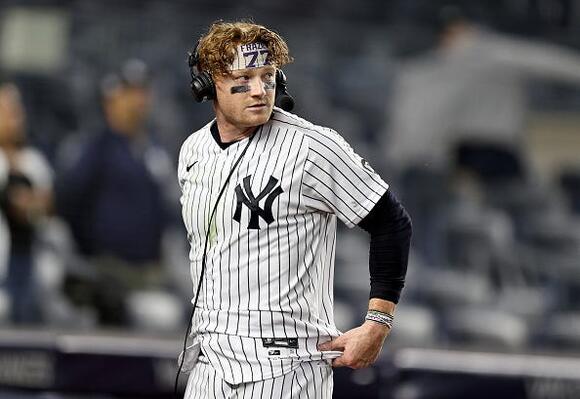 Clint Frazier has a new home.

The former hyped prospect and Yankees outfielder is closing in on a one-year deal with the Chicago Cubs, according to Jesse Rogers of ESPN .

Frazier, 27, was released by the Yankees a week ago after a disappointing five seasons with the organization that saw him consistently shuffling between Triple-A and the majors without ever reaching his full potential.

The outfielder struggled in 2021, hitting a slash line of .186/.317/.317 in 66 games before missing the final three months of the season after experiencing vision and head issues.

It’s unclear what was the root cause of those issues, although he does have a history with concussions.

Frazier was immensely hyped since arriving to the Yankees as the center piece in a trade with the Indians involving relief pitcher Andrew Miller in 2016.

Yankees GM Brian Cashman described Frazier as someone with “legendary bat speed,” but the prospect never fully lived up to expectations, struggling at the plate and in the field.

He appeared to have turned a corner in 2020, hitting eight home runs and 26 RBI with a slash line of .267/.394/.511 in 39 games for a banged-up Yankees team before struggling again in 2021 and ultimately being released as the team traded for Joey Gallo.

Frazier still has controllable years through the 2025 season barring any changes to the collective bargaining agreement this winter.

He will get a chance to make a mark with the Cubs as they continue to rebuild after selling off key core pieces of their team last summer.

Those who followed the 2000s New York Yankees heavily have some fond memories of a homegrown outfielder that looked like a solid contributor, at the very least a solid reserve: Melky Cabrera. On Friday, MLB insider Hector Gomez announced that Cabrera is retiring from baseball at 37, after playing for...
MLB・1 DAY AGO
WFAN Sports Radio

Are the Mets overtaking New York from the Yankees? CC Sabathia says 'The tide is definitely changing'

After this offseason’s spending spree, are the Mets overtaking New York from the Yankees? CC Sabathia says ‘The tide is definitely changing.’
MLB・2 DAYS AGO
WNTZ

Note: Rachel Balkovec received her Master’s Degree in Sports Administration from LSU in 2012. NEW YORK (AP) — Rachel Balkovec is aware of the negativity in her social media feeds and tries to leave it there. Her sisters see it, too, and can’t help but pass along certain disparaging reactions to her barrier-breaking journey. “It’s […]
NEW YORK CITY, NY・2 DAYS AGO
Sports Illustrated

Melky Cabrera, the starting center fielder for the Yankees’ 2009 World Series winning team, has retired. “I think the time has come for me to retire from MLB,” Cabrera said on social media in Spanish. Cabrera hadn’t played since 2019. Just three players from the Yankees’ last world...
MLB・1 DAY AGO
FanSided

Chicago Cubs: Top 5 seasons by a starter based on winning percentage

No stock has fallen further in recent years than pitcher wins. Today, you can find them along the far back wall of your local Baseball Depot, between AstoTurf and bullpen carts. While the win lacks force as a diagnostic or predictive tool. a pitcher that garners a bunch of them in a season has probably done at least some things right. and when that pitcher wins many and loses very few, chances are he’s had a pretty good season. So let’s look at the five best seasons by winning percentage amassed by Chicago Cubs starters. And no, this isn’t just an excuse to spend more time discussing Jon Les-
MLB・16 HOURS AGO
FanSided

Who will bat leadoff for the 2022 Chicago Cubs?

Since Dexter Fowler’s two-year stint with the Chicago Cubs drew to a close after the 2016 season, the team has employed a plug-and-play approach when it comes to the leadoff spot, to limited success. We’ve seen everyone from Kyle Schwarber and Kris Bryant to Anthony Rizzo and Willson Contreras...
MLB・1 HOUR AGO
FanSided

The offseason has been dragging, not only for the Chicago Cubs but for every team in the league. It has been a little over a month since Major League Baseball’s lockout began on Dec. 1, 2021, at 11:59 pm. Currently, we are halfway to the tentative dates for the beginning of spring training, and so far, there are few signs of life.
MLB・2 DAYS AGO

While we all sit here twiddling our thumbs as the MLB lockout rages on, there’s still plenty to be crossed off the to-do list of the Chicago Cubs before Opening Day. Adding impact bats remains a possibility, particularly when it comes to Carlos Correa, but that alone won’t drastically alter the trajectory of this club in 2022. The rotation is in a much stronger spot than a year ago, but the bullpen is raw and could use some stabilizing veteran presences added into the mix.
MLB・1 DAY AGO
Inside The Dodgers

If there is one thing the Chicago Cubs are known for, it’s packed houses at Wrigley Field. Whether it be because of the national fanbase, and/or the novelty of going to one of the few remaining classic ballparks in America, the Friendly Confines is often full. This has been done on a consistent basis for the past several decades going back to the 1980s.
MLB・22 HOURS AGO
Chicago Tribune

After being traded to the Los Angeles Dodgers last season and finishing a massive 10-year deal inked with the Angels, Albert Pujols is now a free agent once again and looking for a team to join for the upcoming 2022 season. In a December interview with La Vida Baseball, the veteran slugger opened ...
MLB・1 DAY AGO
Yardbarker

After their pitching staff was decimated by injuries a season ago, the Mets must build depth in this area in order to prevent this from occurring again in 2022. On Jan. 13, Baseball America reported that the Mets have signed two hurlers to minor league deals, veteran left-handed side-armer Alex Claudio and righty Stephen Nogosek.
MLB・2 DAYS AGO
Sportsnaut

Despite labor stalemate, MLB reportedly still on track for universal DH in 2022

Despite another fruitless day in MLB labor negotiations, baseball remains likely to adopt a universal DH in 2022. Thursday’s virtual meeting represented the first significant talks between players and owners since the lockout began last month.
MLB・2 DAYS AGO
670 The Score

The Chicago White Sox and 23-year-old Cuban outfielder Oscar Colas have agreed to a $2.7-million deal, MLB.com reported Saturday. He was the fifth-ranked international prospect in this class.
MLB・21 HOURS AGO
Sportsnaut

The MLB lockout freezes big-league transactions. In a way, the Philadelphia Phillies have been frozen for a decade. Missing the
MLB・1 DAY AGO