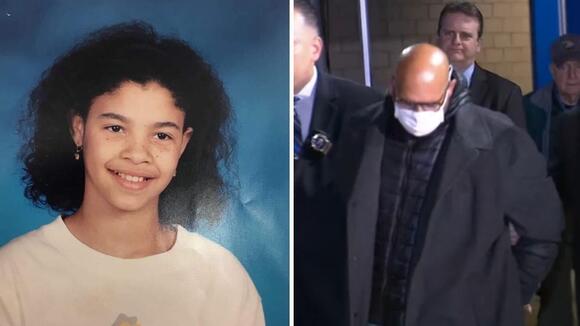 New details were revealed during an arraignment for the suspect charged in the 22-year-old murder of a 13-year-old girl in the Bronx. Joseph Martinez, 49, was arraigned Tuesday following his arrest on Monday . He is accused of killing 13-year-old Minerliz "Minnie" Soriano in the Bronx in 1999. Soriano's body was discovered in a dumpster. She was apparently on her way home in Co-Op City at the time of the murder. Officials allege that Martinez, who now goes by "Jupiter Joe" and teaches astronomy to children, strangled the victim sometime between Feb. 24 and Feb. 28 of that year. She died during a sex assault, according to the unsealed grand jury indictment. "This beautiful little girl was treated less than human, it has been 22 years since her life was cruelly taken but detectives never gave up on finding justice for her and her family," said Bronx District Attorney Darcel Clark. Police say advanced DNA technology helped them make the arrest after a newly available DNA test linked Martinez to the murder. It's the first time the technology was used in New York City. The NYPD's commanding officer of the forensics investigation division said detectives found the father of suspect which then led them to Martinez. He says it's like building a family tree, by searching for specific familial DNA. Officials explained the DNA evidence from Soriano was initially searched with the government database and had negative results in 2000. But when familial DNA was introduced, specialized software was used to find a relative. "There were several persons of interest in this case, all of whom were excluded by DNA," prosecutors told the judge at Martinez's arraignment, highlighting the importance of DNA in finally solving the cold case. Martinez's attorney called the case "unusual" and said he denies the allegations. He noted his client is 49 years old and has no criminal record. He has pleaded not guilty. "The case is pretty unusual in that Mr. Martinez is 49 years old, he has no criminal history," attorney Troy Smith said. "It's unusual that a 49-year-old man would have his first criminal contact at this age. He denies these allegations." However, prosecutors say they have mounds of evidence against him. "This case brings together modern science and traditional investigative work along with the determination to give up on justice for an innocent little girl," said Inspector Neteis Gilbert, executive officer of the detective bureau. Asked if the introduction of the DNA technology would be a game changer for prosecutors -- the DA replied: "We'll have to see." Soriano would be 35 years old today. Her family told Eyewitness news that time has not closed the wounds and the pain of losing her has not ebbed. Her family said they never gave up hope that police would find her killer. ALSO READ | 2 men impersonating NYPD officers rob home in the Bronx: New video

Thank God they finally got him that poor innocent girl, so sad how he took her life, I remember this news article when it happened, What a monster now he can just rot in jail!!!

The attacker approached the 79-year-old man and punched him once in the head.
BROOKLYN, NY・1 HOUR AGO
ABCNY

Police say a man posed as a food delivery worker to enter a building in the East Village, where he shot and killed a man.
NEW YORK CITY, NY・13 HOURS AGO
ABCNY

The seventh-grade student from the Sports and Medical Science Academy in Hartford had been hospitalized since Thursday morning.
HARTFORD, CT・1 DAY AGO
ABCNY

15 Bronx fire victims to be remembered at joint funeral Sunday

Fifteen of the victims will be remembered at a joint funeral. It is set to start at 10 a.m., the very same hour when, Last Sunday, smoke from a fire inside an apartment began filling the entire high rise.
BRONX, NY・1 DAY AGO

Authorities are investigating the death of a Newark fire captain, who was found unconscious at a firehouse along with a retired firefighter.
NEWARK, NJ・1 DAY AGO
ABCNY

The victims ranged in age from 2 to 50 years old. All died from accidental smoke inhalation.
BRONX, NY・2 DAYS AGO
ABCNY

Simon Martial, 61, has been arrested for murder and is being held at Bellevue Hospital with a police guard until his arriagnment.
MANHATTAN, NY・1 HOUR AGO
ABCNY

Exclusive: 75-year-old woman speaks out after being tackled in random NYC assault

A 75-year-old woman who was tackled during a seemingly random attack in Queens is speaking out exclusively to Eyewitness News reporter NJ Burkett.
QUEENS, NY・3 DAYS AGO

The child was pulled from the pool and given CPR as she was rushed to the Plainview Hospital in critical condition.
SUFFOLK COUNTY, NY・2 DAYS AGO
ABCNY

As the victim placed the coat, the man allegedly got up and forcibly threw the good Samaritan to the ground, taking his wallet and attempting to flee the scene.
MANHATTAN, NY・3 DAYS AGO
ABCNY

The mass funeral capped a week of prayers and mourning within a close-knit community hailing from West Africa, most with connections to the tiny country of Gambia.
BRONX, NY・20 HOURS AGO
ABCNY

In this episode of Up Close, FDNY's commissioner joins us to uncover the lessons learned from the tragic and deadly fire in the Bronx last Sunday.
BRONX, NY・1 DAY AGO

Police say an 18-year-old was riding the bus when he was approached by the suspect, who started interrogating him, so he texted his uncle for help.
BRONX, NY・4 DAYS AGO
ABCNY

Teen in grave condition after fentanyl overdose at school in Connecticut

The 13-year-old seventh grader at Sports and Medical Science Academy in Hartford is hospitalized in grave condition after an apparent fentanyl overdose.
HARTFORD, CT・2 DAYS AGO
ABCNY

2 men wanted for stabbing woman, beating her on Bronx sidewalk

Surveillance video shows one of the attackers stabbing the woman several times while she was on the ground.
BRONX, NY・4 DAYS AGO
ABCNY

4 wounded, 1 critically, as gunfire erupts during party in Brooklyn

The most seriously injured victim, believed to be the DJ working at the event, was taken to the hospital in critical condition.
BROOKLYN, NY・4 DAYS AGO

NYPD stepping up patrols at synagogues amid hostage situation in Texas

Security is being stepped up at New York City synagogues following a hostage situation at a synagogue in Texas.
COLLEYVILLE, TX・1 DAY AGO
ABCNY

Police officers pull woman to safety after she falls through icy lake in New Jersey: VIDEO

Investigators are searching for a couple who got into an argument with another customer after the boyfriend accused the victim of leering at his girlfriend.
BRONX, NY・5 DAYS AGO
ABCNY

Rapper arrested after incident on Kosciuszko Bridge in November

A rapper is under arrest after a group temporarily shut down the Kosciuszko Bridge in November -- reportedly for a music video.
NEW YORK CITY, NY・4 DAYS AGO