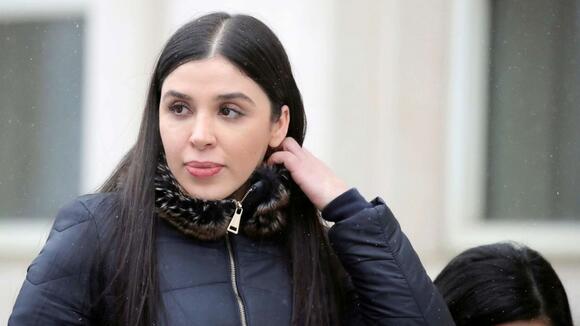 The wife of Joaquin "El Chapo" Guzman was sentenced to 36 months in federal prison for conspiring to distribute cocaine, meth, heroin and marijuana for import into the U.S; money-laundering and helping run the Mexican drug cartel in which her husband was the boss.

The Justice Department initially asked for four years in prison.

In June, she pleaded guilty, and voluntarily forfeited $1.5 million to the government.

She was arrested in February 2021 at Dulles International Airport, just outside the nation's capital.

She was also accused of conspiring with others to assist El Chapo in his July 2015 escape from Altiplano prison and prosecutors said she also planned with others to arrange another prison escape for the drug kingpin before his extradition to the U.S. in January 2017.

"The defendant was not an organizer, leader, boss, or other type of manager" a Justice Department prosecutor told the judge during sentencing on Tuesday, calling her the "cog" in a very large criminal machine.

Aispuro, through an interpreter begged for forgiveness, vowing she will teach her daughters right from wrong.

"I beg you to not allow them to grow up without the presence of a mother," she said.

Guzman was found guilty in February 2019 of running an industrial-sized drug trafficking operation, the Sinaloa cartel, one of the world's largest, most profitable and most ruthless drug smuggling organizations.

He was sentenced to life in prison, and has since tried to appeal the conviction.

and yet they legalized and have safe injection sites for the ones who use drugs, her her husband and the others shouldn't be prosecuted, they never step foot in America, the users and snuggles should be the ones in jail

She probably paid many people to get that vacation time instead of prison time. Shame to the judicial corrupted system.

SAN ANTONIO (KABB) — "The Sinaloa cartel is very much responsible for importing and distributing a lot of the fentanyl in the country right now," said Dante Sorianello, the assistant special agent in charge of the Drug Enforcement Administration in the San Antonio district. Narco Juniors, children of the...
SAN ANTONIO, TX・1 DAY AGO
Daily Mail

El Chapo's appeals have been rejected. According to Complex, all 10 of the 64-year-old's pleas have been shut down by the U.S. Court of Appeals for the Second Circuit, who have determined that "none of these claims has merit." The criminal – also known as Joaquín Guzmán – was sentenced...
CONGRESS & COURTS・3 DAYS AGO
New York Post

El Chapo’s wife, former teen beauty queen Emma Coronel Aispuro, is not actually his wife at all, it seems. Although they wed on her 18th birthday in July 2007, to this day the imprisoned drug cartel leader remains legally tied to his first wife, a social worker he married in 1977.
RELATIONSHIPS・8 DAYS AGO

The decision by the 2nd U.S. Circuit Court of Appeals in Manhattan rejected claims that Judge Brian Cogan made rulings allowing a jury to hear faulty evidence at Guzman's 2019 trial.
CONGRESS & COURTS・2 DAYS AGO
ABC7 Chicago

A federal appeals court on Tuesday upheld the conviction of the Mexican drug lord known as El Chapo. Joaquin Guzman sought to overturn his conviction in Brooklyn federal court on ten grounds. The appellate court concluded "none of these claims has merit." Among Guzman's arguments, the strict conditions of his...
CONGRESS & COURTS・3 DAYS AGO
Fox News

A United States appeals court on Tuesday upheld the federal conviction of reputed Mexican drug lord Joaquin "El Chapo" Guzman, lauding the judge who oversaw the trial for his handling of a case that drew international attention. The 2nd U.S. Circuit Court of Appeals in Manhattan rejected claims that Judge...
CONGRESS & COURTS・3 DAYS AGO
NBC News

The conviction of the notorious Mexican drug lord Joaquin “El Chapo” Guzman was upheld Tuesday by a U.S. appeals court that praised the trial judge for his handling of a case that drew international attention. The decision by the 2nd U.S. Circuit Court of Appeals in Manhattan rejected...
CONGRESS & COURTS・2 DAYS AGO

Despite Appeal, Joaquín ‘El Chapo’ Guzman Is Spending Life In Prison Without Parole

On Tuesday, a federal appeals court upheld Joaquín ‘El Chapo’ Guzman life-without-parole conviction. The decision comes a full five years after El Chapo was captured in Mexico and extradited to the U.S. in 2016. Guzman appealed his sentencing based on what he and his lawyers called “unbridled...
CONGRESS & COURTS・22 HOURS AGO
Newsweek

Judge Tells 1/6 Rioter Capitol Police Officers Are Patriots, Sentences Him to 3-Plus Years

The suspect was previously convicted of aggravated assault with a deadly weapon and attempted possession of a controlled substance.
COLLEYVILLE, TX・2 DAYS AGO
Insider

A journalist who told Mexico's president that she feared for her life was shot dead in Tijuana. She is the 3rd journalist to be killed in Mexico this year.

The FBI on Friday released new details in the investigation of Gabby Petito's death, saying that that Brian Laundrie wrote in a notebook that he killed her. The FBI's Denver office had sent out a timeline of the investigation, saying that before discovering Laundrie's remains in a Florida wetland in October, agents had discovered a backpack, a gun and a notebook that all belonged to him.
DENVER, CO・7 DAYS AGO
thesource.com

According to a report from The New York Post, a man has been freed from a Chicago jail after being incarcerated for two decades for a crime committed by his twin brother. Kevin Dugar has been behind bars since a 2003 shooting of a rival gang member that his identical twin, Karl Smith, has confessed to committing back in 2016. Smith is already serving a 99-year sentence for a home invasion that resulted in a child getting shot in the head.
CHICAGO, IL・9 HOURS AGO
HuffingtonPost

Reacting to news that a progressive Democrat’s car was hit by gunfire, a New York police officer said during an appearance Thursdat on Fox News that “we need” lawmakers to be victims of crimes so they can “see firsthand how bad the streets really are.”. During...
NEW YORK CITY, NY・21 HOURS AGO
Vice

MEXICO CITY — Two Canadians were gunned down at a resort on Mexico’s famed Yucatan Peninsula last week in what seemed like another instance of rising violence affecting tourists along the Caribbean beaches of the state of Quintana Roo. But the case quickly took an odd turn when...
PUBLIC SAFETY・1 DAY AGO
ABC7

Whittier man, 5 others charged in scheme to smuggle weapons to Mexican drug cartel

A Whittier man and five other people have been indicted in an alleged scheme to smuggle high-powered weapons and hundreds of thousands of rounds of ammunition to one of the largest and most violent drug cartels in Mexico.
WHITTIER, CA・2 DAYS AGO
ABC 10 News KGTV

The slayings, one in the eastern Mexican city of Veracruz and two in Tijuana, have not been solved.
SAN DIEGO, CA・2 DAYS AGO
CBS DFW

DALLAS (CBSDFW.COM) — Twenty alleged drug dealers and dozens of others have been arrested and charged in what the U.S. Attorney’s Office is calling “Operation Shut Down Corner”. The operation – which involved more than 150 agents and officers from the North Texas OCEDTF Strike Force – focused on Hamilton Park, a north Dallas neighborhood that has been plagued by crime driven by a violent gang known as the Hamilton Park Posse. During the investigation, DEA agents and their law enforcement partners seized 37 guns, 220 pounds of drugs (including cocaine, fentanyl-laced counterfeit pills, methamphetamine, and marijuana), and more than $400,000 in...
DALLAS, TX・2 DAYS AGO
Complex

In the latest installment of the weirdest ways to store-and-transport drugs: Officials at a Colombian port found 20,000 coconuts full of liquid cocaine in a shipment that was headed for Italy. Vice reports that the coconuts were being kept in 500 canvas bags on a container that was leaving Colombia’s...
PUBLIC SAFETY・23 HOURS AGO