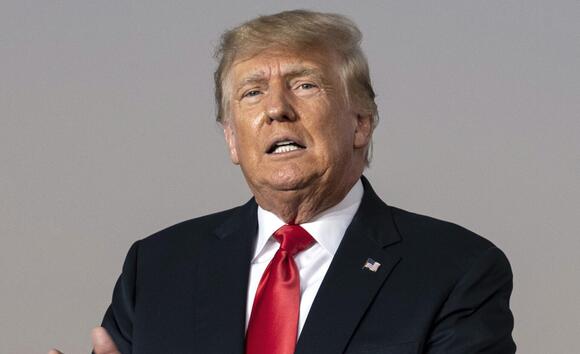 A fter a recent video surfaced of Rep. Lauren Boebert making anti-Muslim comments about Rep. Ilhan Omar, former President Donald Trump on Tuesday called for the Minnesota Democrat to apologize rather than the Colorado Republican.

Without naming Boebert but clearly in reference to the controversy, Trump said in a statement that “Omar should apologize for marrying her brother, committing large-scale immigration and election fraud, wishing death to Israel, and for essentially abandoning her former country, which doesn’t even have a government — Exactly what she’d like to see for the United States!”

Trump has previously accused Omar of marrying her brother, a claim she has dismissed as “absolutely false and ridiculous” and the product of conspiracy blogs. The claim is unproven.

Boebert referred to the unproven claim in remarks on the House floor earlier this month, referring to Omar’s “brother-husband” while objecting to the censure of Rep. Paul Gosar for tweeting an edited video depicting him as an anime character attacking Rep. Alexandria Ocasio-Cortez and President Joe Biden.

Since the 2020 election, the former president has made a series of unfounded claims the election was stolen from him and that Omar has committed “large-scale immigration and election fraud.” He also appeared to take aim at the Somalia-born lawmaker for being an immigrant, accusing her of “essentially abandoning her former country.”

Trump claimed Omar wished death to Israel in another unproven claim. Omar has made controversial remarks about Israel, including a social media post that seemed to compare the United States and Israel to Hamas and the Taliban. Some of her Democratic colleagues pushed back on Omar's remarks, which they characterized as antisemitic.

In the controversial video, Boebert claims that while she was in an elevator with Omar, a Capitol Police officer appeared to be concerned she was a terrorist.

"'Well, she doesn't have a backpack, we should be fine,'" Boebert recalled saying in an apparent reference to suicide bombings.

Omar called the story “made up” and said Boebert “thinks bigotry gets her clout.”

Boebert initially attempted to walk back the comments but defended them after a tense call with Omar, in which the Minnesota Democrat pressed for a public apology that Boebert refused to give.

The feud between Greene and Mace showed no signs of letting up Tuesday as they continued to take aim at one another.

This Trump guy has never apologized for anything. He is a washed up has been that has the support of 10% of the former Republican Party 🥳

Trump is trying to run out the Clock on the Investegation of the January sixth Insurrection. But time is running out on his delaying tactics and obstruction. This Boebrat controversy is a convenient distraction that he can exascrebate, and keep public attention off his looming legal problems, while keeping hope alive for a big comeback. JUSTICE WILL NOT BE SATISFIED UNTIL TRUMP AND ALL WHO CONSPIRED WITH HIM ARE HELD ACCOUNTABLE FOR THE JANUARY SIXTH INSURRECTION 🗽

And the United States 🇺🇸 and the rest of the world is waiting on you to apologize for the destruction, kaos and turmoil you caused in the last 4 years

Neither of Donald Trump's impeachment trials led to his conviction, which would have prevented him from returning to the White House. Rep. Jamie Raskin has another idea on how to bar the former president.
POTUS・14 HOURS AGO
WashingtonExaminer

Twitter permanently suspended the account of Iran's supreme leader after it posted a video calling for a drone strike on former President Donald Trump.
POTUS・1 DAY AGO
Newsweek

One QAnon follower said: "When he came out…I instantly felt it was not him. I kept trying to convince myself that it was."
ARIZONA STATE・22 HOURS AGO

The U.S. Senate's only Black Republican is putting forth what he characterizes as a positive response to partisan rhetoric on race that he's best-positioned to rebut
PRESIDENTIAL ELECTION・19 HOURS AGO
Newsweek

The MyPillow founder made the remarks at Trump's Arizona rally, where many speakers touted conspiracy theories about the 2020 election.
PRESIDENTIAL ELECTION・1 DAY AGO
Newsweek

Calls to somehow undo the 2020 election results once again rang out during the former president's rally in Florence.
PRESIDENTIAL ELECTION・17 HOURS AGO

"I think anyone with common sense would be reluctant to go talk to this committee," the GOP congressman said.
CONGRESS & COURTS・1 DAY AGO
Newsweek

"100 Seats, 100 Years," he added on Gettr, referring to the century of political domination he argues will begin with the midterms.
ARIZONA STATE・1 DAY AGO
The Guardian

Former President Donald Trump touched down in Arizona Saturday for his first rally of the midterm election year, bringing the spotlight to a state that will have hotly contested races for governor and the U.S. Senate in November. In the governor's race, Trump has endorsed Kari Lake, a former news...
ARIZONA STATE・2 DAYS AGO
Washington Post

Former president Donald Trump lashed out Monday at Sen. Mike Rounds (S.D.), calling him a “jerk,” a day after the GOP senator said the 2020 election was “as fair as we have seen” and dismissed Trump’s widely debunked allegations of extensive voter fraud. Speaking on...
PRESIDENTIAL ELECTION・7 DAYS AGO
NBC News

Sen. Mike Rounds, R-S.D., hit back at Donald Trump on Monday after the former president issued an insult-laden statement blasting the senator for not supporting his baseless claims of a stolen election. The back and forth began when Rounds told ABC News in an interview Sunday that the 2020 presidential...
PRESIDENTIAL ELECTION・7 DAYS AGO

Rep. Ilhan Omar (D-Minn.) called on President Joe Biden to close Guantanamo Bay prison for good in a new essay featured in Teen Vogue. On the 20th year to the day that the notorious offshore prison at Guantanamo Bay was opened, Omar said it’s time for the prison ― which has long been known for enacting torture on its prisoners, many of whom have never been charged with a crime ― to close.
U.S. POLITICS・6 DAYS AGO
Newsweek

"The election was fair, as fair as we have seen. "We simply did not win the election, as Republicans, for the presidency," Rounds told ABC News.
PRESIDENTIAL ELECTION・7 DAYS AGO
KFOR

Democrats have been waiting for a year for President Joe Biden to call out former President Donald Trump for his claims about the 2020 presidential election and pinpoint the role Trump played in instigating his followers to “fight like hell” to contest the result.
PRESIDENTIAL ELECTION・9 DAYS AGO
The Associated Press

WASHINGTON (AP) — It may not be the fight he sought, but taking on Donald Trump is President Joe Biden’s calling. Biden offered himself as a guardian of American democracy in a visceral speech Thursday discussing the horrors of the Jan. 6 insurrection that sought to overthrow his 2020 election victory. Trump’s refusal to accept the reality of his defeat spawned a conspiracy that came close to shattering the nation’s system of government and continues to ripple through society a year later.
PRESIDENTIAL ELECTION・11 DAYS AGO