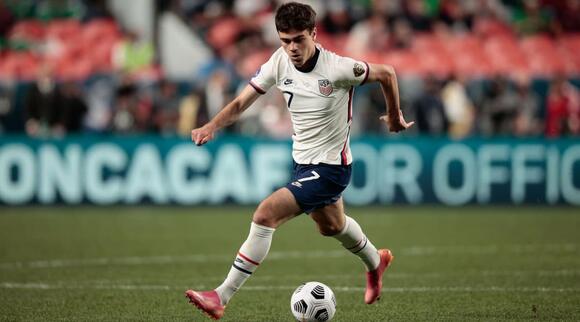 The Borussia Dortmund winger has not played since Sept. 2.

The winger, who just turned 19 this month, has not played in nearly three months after sustaining a hamstring problem against El Salvador on Sept. 2 during World Cup qualifying. He has also missed the USMNT's last seven qualifiers after winning the Concacaf Nations League over the summer .

He started the season well with Dortmund with two goals in the club's first three league games before sustaining the injury during the international break. He also became the youngest player in the German top flight's history to make 50 Bundesliga appearances .

Earlier this month, Dortmund manager Marco Rose said that Reyna's tendon and nerves were affected by the injury, leading to the longer-than-expected layoff. But Reyna returned to the training pitch Tuesday to applause from his teammates ahead of second-place Dortmund's top-of-the-table meeting with Bayern Munich.

According to Bundesliga.com , Reyna is unlikely to be available for Saturday's showdown. Dortmund then hosts Beşiktaş in its final Champions League group stage match Tuesday.

However, with only six points from five Champions League games, the German side has already been excluded from advancing to the knockout stages after a 3–1 loss to Sporting Lisbon last week.

On Monday, Reyna finished ninth in voting for the Kopa Trophy , which is awarded by France Football to the best U-21 player in the world. Barcelona midfielder Pedri took home the trophy.

Reyna likely out for Dortmund until after qualifying break

Gio Reyna probably won’t play for Borussia Dortmund until after the international break, making it unlikely he will make the roster for the United States’ next three World Cup qualifiers. Reyna has not played in any games since injuring his right hamstring during the Americans’ opening qualifier at...
SOCCER・1 DAY AGO
Sports Illustrated

Robert Lewandowski took home his second straight award, but one star competitor left him off the ballot completely.
UEFA・1 DAY AGO
The Independent

The theme pre-match had extended to the focus in the aftermath of an exacting 3-0 victory over Brentford, which catapulted Liverpool above Chelsea and loosely within reach of Manchester City at the Premier League summit.Just as, ahead of the encounter, he referenced the external din over the absence of Mohamed Salah and Sadio Mane due to the African Cup of Nations, Liverpool manager Jurgen Klopp circled it in his post-match briefing. The anaemic attack during the goalless draw against 10-man Arsenal in the first-leg of the Carabao Cup semi-final raised obvious concerns, slightly lifted by contributions in front of the...
PREMIER LEAGUE・1 DAY AGO
The Independent

What the papers sayDonny van de Beek has rejected his reported loan deal to Newcastle from Manchester United, according to the Telegraph. The 24-year-old midfielder had been in the sights of the Magpies as they battle against relegation, but the club’s unstable position was also said to be what caused Van de Beek to turn the deal down.Newcastle have struggled with other transfer prospects too but, according to the Daily Express, the club is optimistic a deal for Sevilla defender Diego Carlos can be closed this week. The 28-year-old Brazilian reportedly wants to move to the Premier League and seems...
PREMIER LEAGUE・1 DAY AGO

It was inevitable that Everton would sack Rafa Benitez. In theory he was a good appointment. The reality was different. The 61-year-old has the sort of obsessive nature and organisational talents needed to untangle a club in a mess. Just not this club.Almost no one wanted him. Not the owner, not the board, not the fans. Alisher Usmanov, the main sponsor and business associate of Farhad Moshiri, was the Spaniard’s biggest advocate. Moshiri, the man with his name over Goodison’s front door, was always dubious.Benitez had committed just about the worst crime in the eyes of the Gwladys Street. He...
SOCCER・1 DAY AGO
San Diego Union-Tribune

Arsenal are optimistic their Carabao Cup semi-final second leg against Liverpool will go ahead as planned on Thursday night.The Gunners successfully appealed to the Premier League to have Sunday’s north London derby away to Tottenham called off in the absence of a number of players.Injuries, suspension, coronavirus cases and losing players to the Africa Cup of Nations saw Mikel Arteta’s ranks depleted enough for the league to postpone their scheduled fixture.However, the PA news agency understands there have been no additional Covid-19 cases in the past two days and a couple of players are now likely to be fit following...
PREMIER LEAGUE・13 HOURS AGO
Insider

Ronaldo was also included in the World11 at the expense of Mohamed Salah, while the women's awards on the night faced backlash from current players.
FIFA・16 HOURS AGO
The Guardian

When it comes to news like Rafa Benitez’s sacking at Everton, much of the story usually centres on how “upbeat” the players now are, and how they felt he was taking them down.That is true, but this whole episode is really about something so much bigger. If the football side of the club finally sees sense, it should be the start of something new; a proper fresh start. It kind of has to be, since the hierarchy of the club has been hollowed out as a consequence of Benitez.That is his “legacy”.Benitez’s entire reign was really the end result of...
PREMIER LEAGUE・2 DAYS AGO

Thomas Tuchel says Chelsea need to “recharge the batteries” after blaming tiredness for their lacklustre performance in the 1-1 Premier League draw at Brighton The European champions’ fading title hopes suffered another setback after Hakim Ziyech’s first-half opener was cancelled out by stand-in Albion skipper Adam Webster.Chelsea topped the table as recently as the start of last month but have spectacularly fallen out of contention having now won just two of their nine top-flight outings since.Blues boss Tuchel once again bemoaned his club’s punishing schedule and now plans to give his players two days off ahead of Sunday’s home game...
PREMIER LEAGUE・4 HOURS AGO
The Independent

Alexia Putellas has won the 2021 Best Fifa Women’s Player award to complete a double of major individual honours following her victory at the Ballon d’Or last month. The Barcelona captain saw off competition from teammate Jennifer Hermoso and Chelsea striker Sam Kerr to win the award at a ceremony in Zurich on Monday night. She becomes the first Spanish player to win the award after playing a key role in Barcelona’s dominant treble-winning campaign, which saw the club lift the Women’s Champions League as well as the Primera División and Copa de la Reina. “I’m very happy, I’m thrilled,”...
FIFA・1 DAY AGO
goal.com

The teenager hasn't featured for his club since September due to a serious hamstring injury. Borussia Dortmund coach Marco Rose has expressed his concern over Giovanni Reyna's fitness, admitting the winger has "lost something over time" while setting a possible return date for the United States international. Reyna has only...
SOCCER・1 DAY AGO
San Diego Union-Tribune

When are the Fifa Best awards and who is nominated in 2022?

The winners of Fifa’s men’s and women’s player of the year are set to be crowned in the sixth edition of the Fifa Best Awards. Eleven players have been nominated for each award with three finalists set to be announced ahead of the awards ceremony on Monday 17 January. Robert Lewandowski is the reigning men’s winner while Lucy Bronze won the women’s award last year. There will also be awards for men’s and women’s coach of the year, goalkeeper of the year, as well as the Puskas award for goal of the year. The Fifpro men’s and women’s world...
PREMIER LEAGUE・1 DAY AGO
The Independent

Cristiano Ronaldo is expected to be available for Manchester United's trip to Brentford though will have to come through Tuesday's training sesssion at Carrington, Ralf Rangnick has said.Ronaldo and Marcus Rashford were left out of United's match day squad for Saturday's 2-2 draw at Aston Villa, missing their second consecutive game despite Rangnick expecting both to return.The United interim manager said both players were ruled out of making the trip to Villa Park after Friday's late training session but says both are currently in contention to play Brentford."Cristiano and Marcus were training yesterday so I suppose they will be training...
PREMIER LEAGUE・15 HOURS AGO
The Independent

What the papers sayScotland and Aston Villa midfielder John McGinn is of major interest to Manchester United The Telegraph reports that 27-year-old McGinn is “admired” by compatriot Darren Fletcher who became technical director at Old Trafford last year. On incomings at Villa, the Daily Mail reports that the club expects to complete a loan deal for 32-year-old Roma goalkeeper Robin Olsen after a medical on Tuesday. Villa are also reportedly interested in 25-year-old Brighton midfielder Yves Bissouma.Newcastle have offered 30 million euros to Italian side Atalanta for Duvan Zapata, according to the Daily Record. The Magpies are reportedly working on...
PREMIER LEAGUE・19 HOURS AGO