Read the latest Corpus Christi, Texas news and weather from KRIS 6 News, updated throughout the day. 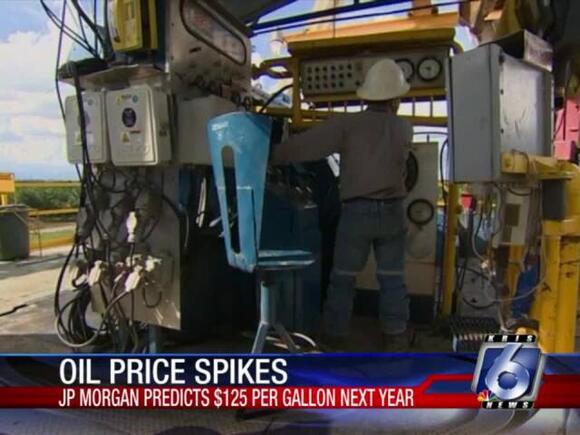 Motorists, are you enjoying that brief respite from soaring gas prices the last several days?

Don’t get too used to it.

Financial services firm J.P. Morgan says the worst is yet to come.

This year's surge in oil prices has had a major impact on American drivers and their views on the economy.

Oil at $150 per barrel would likely mean national gas prices topping $5 a gallon.

They expect it to settle around $88 a barrel next year -- before increasing to $125 a barrel.

Oil giants should think twice about investing in new oil projects based on current surging prices or they could risk wasting billions, a new report has warned.The price of Brent crude oil has increased by nearly 40 dollars (£29) per barrel in the last year, and hit 90 dollars (£66) on Wednesday for the first time since 2014.It means that new drilling projects that would not have made financial sense a year ago could now be economical.However, a report from Carbon Tracker warned that oil companies should not make the mistake of assuming that this high price will stick around.“Companies...
TRAFFIC・9 HOURS AGO
FXStreet.com

The exceptional strength in energy markets over 2021 has continued into 2022. Growing geopolitical risks and supply disruptions have proven constructive for prices. Oil should correct lower as supply disruptions subside. However, the gas market will likely remain volatile at elevated levels. Back to surplus for oil. The continued unwinding...
TRAFFIC・1 DAY AGO
OilPrice.com

Oil prices rallied this week on a set of bullish predictions from major investment banks but may have climbed too high too fast. Leading investment banks issued their outlooks for 2022 this week, with both Goldman Sachs and Morgan Stanley expecting crude oil prices to hit $100 per barrel this year as oil inventories continue to ebb further and OPEC+ spare capacity falls. These reports drove ICE Brent past the $90 per barrel mark for the first time since 2014 this week, but the oil rally fizzled out by Friday as the priced-in geopolitical premium weakened. Despite recurring forecasts of an impending supply shortage, the coming weeks should see more crude on the market - Libya is already back and Ecuador will be getting there soon, too. The wide backwardation in futures markets, with the Brent M1-M12 spread at $8 per barrel, indicates that market fundamentals still point towards a drop from here, rather than a rally continuation. By Friday, global benchmark Brent traded around $88 per barrel, whilst WTI was trending at $85 per barrel.
TRAFFIC・5 DAYS AGO
KRIS 6 News

Rising oil prices are being seen across the nation, resulting in higher prices we’re paying at the gas pump.
CORPUS CHRISTI, TX・7 DAYS AGO

Oil prices rose slightly in Monday’s trade, thanks to the expectation that oil supply will remain tight globally. Despite a recent increase in oil production from Libya, the anticipation is there will not be enough oil for economies and consumers as eyes turn to a hopeful life after COVID-19.
TRAFFIC・8 DAYS AGO
oilandgas360.com

Oil prices were steady on Monday, as investor bets that global supply will remain tight amid restraint by major producers were offset by a rise in Libyan output. Brent crude was down 4 cents, or 0.1%, to $86.02 a barrel by 0953 GMT. Earlier in the session, the contract touched its highest since Oct. 3, 2018, at $86.71.
TRAFFIC・9 DAYS AGO
OilPrice.com

The Bullish Case For Oil Prices In 2022

At the start of 2022, Omicron’s surge and record COVID cases in many major economies are combining with an expected oversupply on the oil market to give bears a reason to cheer. Yet, oil prices rose by 5 percent in the first trading week of the year as analysts...
TRAFFIC・14 DAYS AGO
institutionalinvestor.com

Private Equity Firms Think the Best Investment Is . . . Themselves

It’s time for private equity firms to get their own houses in order. According to the latest 2022 Global Private Equity Survey by Ernst & Young, private equity firms will be focused over the coming year on talent management, product expansion, and their ability to incorporate environmental, social, and governance research. After a year of rapid growth, private equity firms are moving toward an “institutional mindset,” a natural step for any maturing industry, according to Kyle Burrell, a partner at EY.
ECONOMY・1 DAY AGO

Eddyline Kayaks, North America’s premier manufacturer of lightweight touring and recreational kayaks, announced that it has raised a minority growth equity investment from RZC Investments. Located in Bentonville, Arkansas – RZC Investments is a multi-strategy investment firm focused on deploying capital into operating businesses as the investment arm for Steuart Walton and Tom Walton. As part of the investment, RZC Vice President Don Huffner joins the Eddyline board along with long-term managers Todd Keane, Janet Sutton, and Scott Holley.
BENTONVILLE, AR・5 DAYS AGO
MarketWatch

Shell and BP rallied Wednesday, as the two oil majors benefit from the continued strength in oil prices.
STOCKS・18 HOURS AGO
KRIS 6 News

Nearly two years into the COVID-19 pandemic and Texas restaurants are feeling the heat of rising prices due to inflation.
7 HOURS AGO
thedanielislandnews.com

One of Daniel Island’s largest employers has a new investor after a Class A corporate headquarters office building transaction took place earlier this month. Business will remain as usual at software developer Benefitfocus, one of Charleston’s largest employers that has been a fixture for the past 20 years.
CHARLESTON, SC・19 HOURS AGO

Manna Tree Partners, a private equity firm based in Vail, Colorado, describes itself as believing that “the future of health, well-being, and longevity is attainable through innovation in food.” The firm’s role in that vision? Invest in companies whose products are intended to make people feel and live better.
VAIL, CO・1 DAY AGO
just-food.com

Plenty has secured close to US$1bn in financing since its founding in 2014. Plenty Unlimited has added to its funding pot, with the US vertical-farming business attracting investment from Walmart. The California-based business, a grower of fresh fruits and vegetables cultivated in a controlled indoor environment, has won US$400m in...
AGRICULTURE・1 DAY AGO
irei.com

Colliers recently announced it has entered into an agreement to make a strategic investment in Basalt Infrastructure Partners, a leading transatlantic infrastructure investment management firm with more than $8.5 billion of assets under management. The transaction is subject to customary closing conditions and approvals and is expected to close in the second half of 2022. Financial terms were not disclosed.
BUSINESS・2 DAYS AGO
invezz.com

Crude oil price has recorded gains for five consecutive weeks. Geopolitics and demand optimism continue to fuel the uptrend. Brent futures are at the border of the overbought territory. Crude oil price has been in the green for five consecutive weeks amid heightened demand optimism. The last time that the...
ENERGY INDUSTRY・3 DAYS AGO
OilPrice.com

Investments in crude oil this year in Canada could rise by as much as 22 percent, according to the Canadian Association of Petroleum Producers. While this is an improvement over 2021, the expected spending total of US$26.2 billion (C$32.8 billion) is still much lower than the annual industry spending a decade ago, CAPP said as quoted by CBC.
ENERGY INDUSTRY・5 DAYS AGO

Read the latest Corpus Christi, Texas news and weather from KRIS 6 News, updated throughout the day.