The Sabres' Dahlin needs to understand he can't get frustrated. 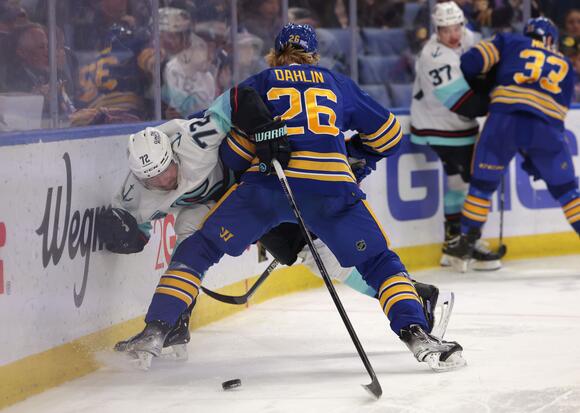 Buffalo, NY (WGR 550) – On Monday Rasmus Dahlin had two monumental mistakes in the first period that led to two Seattle Kraken goals. That’s really been the problem with Dahlin, his mistakes are usually huge and wipe out the two or three good games he had before the Seattle game. Don Granato said, “What we’re seeing is a pattern, when he comes into the league, he could impose his will and skill on an opponents and when he gets frustrated, he tries that, so he doesn’t adjust.

“If an experienced player in this league isn’t feeling it, they adjust their game. When he gets frustrated he doesn’t tweak his game, he forces things, he presses and the second goal was a perfect example, he just pressed. There was an easy play wide open on the other side, but he tried to take it over himself and he’s got to learn to fight that urge. He would’ve saw the play had he felt like he didn’t need to redeem himself on the first goal.”

Dahlin agreed that he needed to make the easy read and not do too much, “If I just look to the right and pass to Vic, it wouldn’t have happened so, stuff happens.”

Fans are screaming that they want the 21-year-old benched or sent down to Rochester. Granato said, “This issue is not going to be resolved by me yelling at him or benching him, he’s got to make that mistake and learn from it.”

Dahlin appreciates that approach and he feels it helps him get better, “Yes for sure, it helps, but to get better from it it’s just go out early, work harder and reflect on that type of stuff and you will get better, but it helps for sure that he believes in me.”

Dahlin was the first overall pick in the 2018 Draft and has yet to have the success that Andrei Svechnikov, Brady Tkachuk or Quinn Hughes has had. Granato said he’s up against a lot of pressure, “It’s really challenging for any player that was selected where he was selected and comes into the league and has a reputation before he ever played a game. Think of the expectations that are heaped on the guys that are No. 1 picks and when you don’t have experience, you try to live up to those expectations because you hear the noise and he’s not compared to a defensemen in the league, he’s compared to the absolute best defensemen in the league, with no experience.”

In nine of their last 14 games the Sabres have given up five or more goals. Their goals against in those 14 games is 4.29 which is second worst in the NHL. Buffalo isn’t going to win many games that way and Dahlin said, “It starts with the gap and how we take their speed and not letting the other team get into our zone and then box out and get their sticks. That creates a lot of confidence and will help create a lot of offense throughout the game.”

Dustin Tokarski had to leave practice after getting hit in the mask with a puck. Granato said he’s still being evaluated.

Jacob Bryson has a minor injury and missed practice, but Granato said he expects him to play Thursday.

Casey Mittelstadt is also progressing well and has a decent chance to return to the lineup on Thursday.

The Buffalo Sabres and Senators are back at it again in Ottawa, just a week after a 3-1 win for the blue and gold also inside Canadian Tire Centre. Making their returns to the lineup for Buffalo are Casey Mittelstadt and Zemgus Girgensons.
NHL・4 HOURS AGO
WGR550

Three Observations: Sabres get shutout in a physical battle

The Buffalo Sabres traveled to Ottawa for the second time in seven days on Tuesday looking to replicate last week’s 3-1 win over the Senators.
NHL・1 HOUR AGO
WGR550

Dell of course was frustrated because three goals had just been scored by Ottawa in 2:55. Dell said, “I was trying to buy some time for my defenseman and I stepped into his lane. I hope he’s all right as I wasn’t trying to hurt anybody.”
NHL・39 MINUTES AGO
WGR550

Sabres to welcome back Girgensons, Mittelstadt on Tuesday

Vegas Golden Knights winger Reilly Smith is one of the hottest names leading up to the NHL trade deadline. With
NHL・1 DAY AGO
USA TODAY

Now that the 2021-22 season is about half of the way through, and Covid is ravaging many clubs, it’s time
NHL・9 HOURS AGO

He said it initially it was a head-shot and after having time to watch it, Pens head coach Mike Sullivan questions why the league won’t punish the hit on Teddy Blueger
NHL・11 HOURS AGO
Chicago Tribune

The NHL season officially started back on October 12. In this article, we track all the NHL games today as
NFL・16 HOURS AGO
Itemlive.com

Keeping pucks out of the net continues to be an issue for the Columbus Blue Jackets and Ottawa Senators. With
NHL・2 DAYS AGO
USA TODAY

The Pittsburgh Penguins are proving that it’s never wise to count them out. Not in games. Not in the chase
NHL・1 DAY AGO
CBS LA

NEW YORK (AP) — Adam Fox scored the deciding goal in the sixth round of a shootout and the New York Rangers beat the Los Angeles Kings 3-2 on Monday night for their ninth win in 12 games. Chris Kreider got his NHL-leading 30th goal, Barclay Goodrow also scored and Artemi Panarin had two assists as New York won its fifth straight at home. Igor Shesterkin stopped 28 shots to pick up his 20th win of the season. Blake Lizotte and Alex Iafallo scored in the second period for Los Angeles. Jonathan Quick stopped 34 shots as the Kings lost for the...
NHL・1 DAY AGO
San Diego Union-Tribune

Sebastian Aho's second goal of the game 3:49 into overtime gave the Carolina Hurricanes a 4-3 victory over the Vegas Golden Knights after blowing a two-goal lead late in regulation
NHL・44 MINUTES AGO
CBS Boston

By Michael Hurley, CBS Boston BOSTON (CBS) — It’s early in the Tuukka Rask 2.0 Era for the Boston Bruins, but the results have been discouraging thus far. Rask fell to 2-2 in his four starts since rejoining the Bruins this month with a 5-3 loss to the Ducks on Monday night. Rask allowed five goals on just 27 shots faced, sinking Boston’s chances in what ended up as just the Bruins’ third loss of the month. Never one to shy away from a bad performance, Rask spoke with the media after the game and matter-of-factly explained his level of play. “Obviously,” Rask said, “I...
NHL・14 HOURS AGO