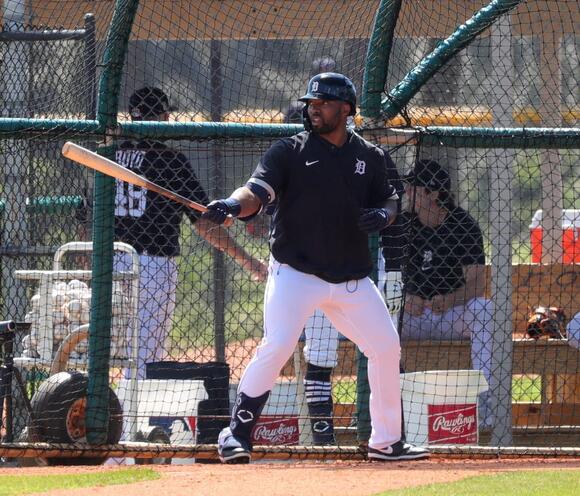 The Red Sox continue to prioritize organizational depth over big-name free agent signings. There latest acquisition does, however, offer some intriguing qualities.

According to a major league source, the Red Sox have agreed to terms with former Tigers first-round pick Christin Stewart on a minor-league deal with an invitation to big-league spring training.

The former University of Tennessee star was drafted with the 34th overall pick in the 2015 Major League Baseball Draft, two spots in front of Baltimore's Ryan Mountcastle. The pick was compensation Detroit received when Max Scherzer signed with the Nationals.

Stewart's best professional season came in 2016 when he managed 30 home runs while reaching Double-A in just his second pro year.

Since then, the power-hitting corner outfielder has struggled with strikeouts, In his 89 games with Triple-A Toledo in 2021 he whiffed 100 times in 343 plate appearance. He did, however, manage 21 homers while finishing with an .877 OPS.

Stewart shares the Georgia High School state record for most home runs, having equaled current big-leaguer Micah Owings with 69. His 26 homers as a junior is a state mark for most in a season.

5 Red Sox who deserve more Hall of Fame consideration. Few Hall of Fame cycles has been more eagerly anticipated by Red Sox fans than this one. After 13 terrific years in Boston, legendary designated hitter David Ortiz is eligible for election, and he is projected to be right at the 75% vote mark needed for election.
MLB・2 DAYS AGO
Sports Illustrated

The Astros, Rays, White Sox, Red Sox and Yankees have to shore up these weaknesses to return to the postseason in 2022.
MLB・1 DAY AGO
Boston Globe

Former Red Sox pitcher Tom House is Tom Brady’s quarterback guru. This week, House will be talking with the GOAT as Brady prepares for Sunday’s divisional-round game against the Rams. House is one of Brady’s inner-sanctum guys, like his trainer Alex Guerrero. After winning the NFC Championship in...
NFL・6 HOURS AGO
WEEI Sports Radio

The Boston Red Sox added to their pitching depth with the signing of former major league righthanded pitcher Taylor Cole to a minor-league deal with a invitation to big-league camp.
MLB・5 HOURS AGO

Jonathan Papelbon joined Rob Bradford on the Live BP podcast to make it clear he has no intention of following in the footsteps of his former teammate Jon Lester, saying he will never announce his retirement.
MLB・2 DAYS AGO
WEEI Sports Radio

Nomar Garciaparra was one of several stars in attendance for the Los Angeles Rams’ playoff game Monday night, and he looks like he can still hit .300.
MLB・1 DAY AGO
USA TODAY

Despite 609 career home runs and seven All-Star appearances, the former Cubs slugger hasn't come close to being elected in his nine years.
MLB・2 DAYS AGO
Audacy

Greg Maddux recalls the shocking twist that led him to sign with the Atlanta Braves over the New York Yankees during his free agency in 1992.
MLB・1 DAY AGO

The futures odds are out for the 2022 World Series, and while a lot can change as the MLB lockout rolls on and eventually gets resolved, the Yankees and Mets are both, as of now, among the favorites.
MLB・1 DAY AGO
Inside The Phillies

Ranger Suárez's success in 2021 doesn't appear to be an anomaly, so the Phillies must exploit that. If they want make the playoffs in 2022, the starting rotation will need to rely heavily on Suárez.
NFL・1 DAY AGO
Inside The Dodgers

The former Dodgers slugger was a fresh of breath air for the Atlanta Braves.
MLB・22 HOURS AGO
Inside The Dodgers

The 2021 Phillies were a top heavy team, both in terms of production and salary. Given that level of top talent, which players from last year's team have a shot at reaching Cooperstown?
MLB・1 DAY AGO
Inside The Dodgers

The Dodgers agreed to a minor league deal with the hard throwing Matusda.
MLB・1 DAY AGO
Inside The Dodgers

The middle of January traditionally signals the changing of the seasons in Chicago, a time to wash away the gloom of another Bears disaster and start thinking warm thoughts. In most years, the sidewalks are caked in ice, another polar vortex is plunging down from the Arctic and the Cubs and White Sox are holding their annual fan fests at a downtown hotel, celebrating the past while hyping the ...
NFL・2 DAYS AGO
Inside The Blue Jays

A CBA expert believes compensation for players still under team control remains the biggest obstacle to a new CBA.
MLB・2 DAYS AGO