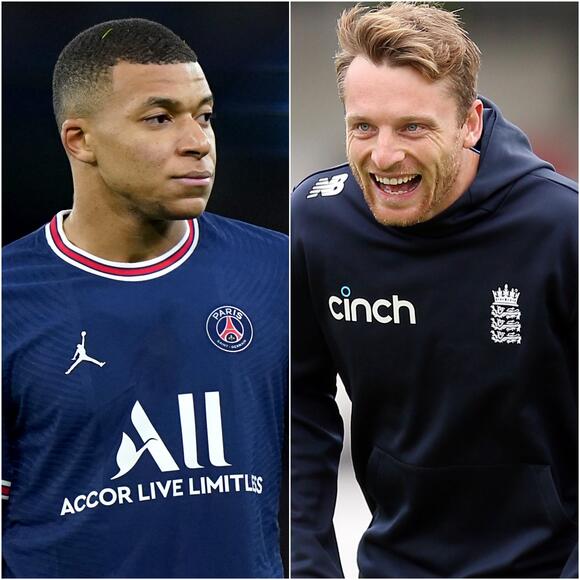 Sports stars and clubs across the world continue to provide an insight into their lives on social media.

Here, the PA news agency looks at some of the best examples from 30 November.

A fifth anniversary for Gareth Southgate.

The plaudits poured in for Lionel Messi and Alexia Putellas.

But the debate raged on.

The winners celebrate at training.

Edinson Cavani is battling back from injury.

Tributes poured in for John Sillett.

West Ham rolled back the years.

But it was still a good day for some of the squad.

Sam Billings was pleased to be back preparing for the BBL.

Carl Frampton took in some sporting action with his family.

Frank Bruno had a feeling of deja vu.

Alpine made an important delivery.

Geraint Thomas was out on his bike.

Tiger Woods was ready for his hosting duties.

"They don't accept that, if you criticize them," Ronaldo said during an interview with Sky Sports this week.
PREMIER LEAGUE・2 DAYS AGO
GOBankingRates

Carli Lloyd Along with 36-year-old Megan Rapinoe, 39-year-old Carli Lloyd is part of the nucleus of the national team's old guard. And although she has now announced her retirement,...
MLS・11 HOURS AGO
The Independent

Kevin De Bruyne scored a brilliant winner as Premier League leaders Manchester City moved 13 points clear with a 1-0 victory over second-placed Chelsea on Saturday.The Belgian playmaker, who had an unhappy spell at Chelsea early in his career, curled beyond Kepa Arrizabalaga from distance to settle a tight contest at the Etihad Stadium with 20 minutes remaining.It was a moment of magic worthy of winning any game but was the least City deserved having dominated against the side that beat them in last season’s Champions League final.Blue is the colour! 💙#ManCity pic.twitter.com/816nfRAo0M— Manchester City (@ManCity) January 15, 2022The win...
PREMIER LEAGUE・19 HOURS AGO
The Independent

Arsenal have submitted a formal request to the Premier League asking to postpone their north London derby fixture against Tottenham on Sunday. Mikel Arteta’s side are suffering from several absences due to a Covid outbreak, injuries and players being away on international duty at the Africa Cup of Nations. The Premier League confirmed the request had been lodged in a statement released on Friday evening and said they will take a final decision on Saturday.“The Premier League has received a postponement request from Arsenal FC relating to their away match against Tottenham Hotspur, due to be played at 4.30pm...
PREMIER LEAGUE・1 DAY AGO

The title race is over now, apparently. You know, the one that ended a few weeks ago. Manchester City already looked like being crowned champions for a fourth time in five years before this twelfth consecutive league win. After it, it seems a nailed-on certainty. There is a faint and remote possibility of a challenge from Liverpool, now 14 points back but with two games in hand. This was a meeting of the top two, though, and it only reinforced the theory that there is in fact only a top one.That was demonstrated not so much by the result, a...
PREMIER LEAGUE・17 HOURS AGO
The Independent

You would think that after signing the Champions League’s all-time leading goalscorer, a four-time winner with Real Madrid and a 21-year-old prodigy who has played in its knockout stages twice already, Manchester United would be well on their way to achieving a top-four finish by now. If only it were so simple.This season was supposed to see the first serious title challenge at Old Trafford. It has instead resulted in Ole Gunnar Solskjaer’s departure, a bloated and unsettled squad, and the appointment of an interim manager who now has about four months to turn results around and meet the minimum...
PREMIER LEAGUE・1 DAY AGO
The Independent

Cristiano Ronaldo is expected to be available for Manchester United, with Harry Maguire also in contention to play in Saturday's Premier League trip to Aston Villa.Ronaldo was left out of the United squad by interim manager Ralf Rangnick for the 1-0 FA Cup third round win over Villa on Monday night after picking up a minor hip injury.The Portuguese was left out as a precaution, with Jadon Sancho and Phil Jones also kept at home after picking up minor issues of their own.All three players are available to Rangnick for the second part of the double header against Villa, while...
PREMIER LEAGUE・1 DAY AGO
The Independent

Ralf Rangnick would prefer to keep both Dean Henderson and Donny van de Beek at Manchester United beyond the end of the January transfer window, despite their desire for regular first-team football.Neither Van de Beek or Henderson have started a Premier League game for United this season, having been left on the sidelines by former manager Ole Gunnar Solskjaer and his interim successor Rangnick.The pair have made their feelings known to the United manager but have so far failed to secure a move away from Old Trafford, with Rangnick reluctant to let either go.Rangnick is having to contend with a...
PREMIER LEAGUE・1 DAY AGO

Seeing Cambridge United stun Newcastle, alone in the middle of the Australian night, I felt every one of the 10,475 miles away
PREMIER LEAGUE・2 DAYS AGO
The Independent

Nine Premier League fixtures will take place this weekend after the majority of clubs have battled through their recent Covid-19 issues.Here, the PA news agency takes a look at some of the key talking points before this round of matches with important clashes at both ends of the table.Will Tuchel have Midas touch?🏆 Congratulations, @ChelseaFC - #UCLFinal winners!@ChampionsLeague pic.twitter.com/btoRg1JM32— UEFA (@UEFA) May 30, 2021Chelsea travel to the Etihad for a lunchtime kick-off on Saturday already trailing Manchester City by 10 points. When Thomas Tuchel first arrived in England, he got the better of Pep Guardiola in three crunch games at...
UEFA・1 DAY AGO
90min.com

Manchester United travel to face Aston Villa in the Premier League on Saturday evening, having just knocked Steven Gerrard's men out of the FA Cup. That 1-0 victory wasn't awe-inspiring, but the it did show character to bounce back from a gut-wrenching defeat at home to Wolves in their prior outing - a result that proved to Ralf Rangnick just how big a rebuilding job he has on his hands.
PREMIER LEAGUE・1 DAY AGO

James Justin is poised to make his Leicester City comeback to end his year-long injury nightmare.The defender is likely to be included in the squad for Saturday’s Premier League trip to Burnley.He has been out since February 2021 with the serious knee injury he suffered in the FA Cup against Brighton.Justin played 45 minutes for the Under-23s against Chelsea on Saturday and is due to be available for the game at Turf Moor.Boss Brendan Rodgers said: “He came through very well, it was initially getting the first appearance in. He felt good in the game. He has trained very well...
PREMIER LEAGUE・2 DAYS AGO
The Independent

The different transfer plans sum up the different moods in north London ahead of Sunday’s derby. Where Tottenham Hotspur are tentative and looking to see what they can do, Arsenal are feeling a bit bullish again.Antonio Conte knows that he has to sell to buy, so Spurs are investigating what is actually possible. Daniel Levy thinks there is little value in January. Arsenal are meanwhile still hopeful that a deal can be struck for Fiorentina’s Dusan Vlahovic.It’s funny how quickly things turn in football. Arsenal have gone from an aimless club undergoing an identity crisis, who couldn’t hope to...
PREMIER LEAGUE・1 DAY AGO
The Independent

Exeter boss Rob Baxter was left enthused by his team’s performance after they brushed aside Heineken Champions Cup opponents Glasgow 52-17 at Sandy Park.The Chiefs emphatically avenged their defeat in the Glasgow fog just before Christmas, finding overdrive after trailing by three points with 50 minutes gone.Exeter, European champions in 2020, cut loose with four quickfire tries to demolish Glasgow’s victory hopes and secure a bonus-point success that brought the round of 16 within touching distance.“You saw that emotional alignment in the team,” Baxter said.“We had a relatively basic game-plan around creating pressure, going to the corner and creating as...
RUGBY・13 HOURS AGO
The Independent

Aston Villa rescued a 2-2 draw in the Premier League against Manchester United after mistakes led to both of the visitors goals.It was an awful start from Villa. Bruno Fernandes took a soft free kick and took his time to strike. When he did, it was a deft touch and goalkeeper Emiliano Martínez looked to have caught it. But he dropped it through his legs to put United ahead.Mason Greenwood had a few chances and Villa threw all they had at United in the closing minutes of the first half but heading into the break the visitors were still 1-0...
PREMIER LEAGUE・14 HOURS AGO
The Guardian

Will Coutinho, the costly Barcelona misfit, show his worth at Aston Villa? | Sid Lowe

Mark Wood bowled up a storm to drag England back into the final Ashes Test, with Australia held to 141 for eight in their second innings at Hobart Wood has bowled with pace and hostility throughout the tour for mostly unflattering figures, but finally had something fitting to show for his efforts with five for 32 as he lit a fire under England’s fading ambitions.Australia’s first-innings lead of 115 meant they had a big enough buffer zone not to panic but at the interval a lead of 256 with two wickets remaining left both sides in the hunt.Alex Carey was...
SPORTS・3 HOURS AGO
The Guardian

Who crossed a borden? Who signed on? Who went low?
PREMIER LEAGUE・1 DAY AGO