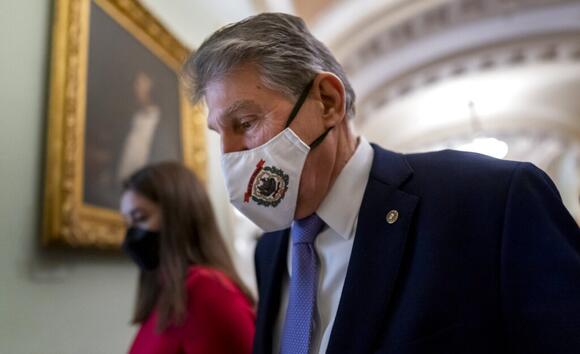 Manchin, who represents West Virginia and is the state’s former governor, huddled with McConnell, the Senate minority leader from neighboring Kentucky, as top Senate Democrats plot a pathway to pass Biden’s Build Back Better legislation by the end of the year.

Manchin opposes efforts by Democrats to include provisions aimed at ending fossil fuels. The Build Back Better legislation provides green energy tax breaks and imposes a methane fee that would hike energy prices.

Manchin told reporters following the 40-minute meeting that the two lawmakers “talked a lot about the area we represent, Kentucky and West Virginia, on some issues we all agree on. Energy is one of them.”

Manchin alone could sink the bill, which means he’ll play an outsize role in determining key provisions and the cost of the legislation.

Manchin also met with Majority Leader Chuck Schumer, a New York Democrat, earlier this week. The two discussed Manchin’s concerns with the Build Back Better bill as Democrats grow increasingly frustrated the West Virginia senator is holding up the legislation.

Schumer insisted Senate Democrats are on course to pass the bill in the coming weeks, even though Manchin’s vote is not secure. Democrats must also win the approval of a second wavering centrist, Kyrsten Sinema of Arizona.

“Before we hit Christmas Day, it is my goal to have the Senate take action to debate and pass President Biden’s Build Back Better legislation,” Schumer pledged on the Senate floor Tuesday.

Manchin is not helping the average West Virginian! Manchin is helping McConnell, McCarthy, Republicans and all of their wealthy 🤑 Pals! That's Obvious 😏!

GOOD FOR YOU SEN. MANCHIN! Proud West Virginians are glad to hear this and are proud you are standpoint with us rather than the toads in the Dumbocrap club!

Democrats want to end vehicles that run on fossil fuels. Translation, it will take privately owned vehicles away from the Middle and Lower Class. You get a bus pass.

WATCH: Psaki suggests kickboxing and margaritas for those upset over failed legislation

White House press secretary Jen Psaki suggested that Democrats sulk away their frustrations with a kickboxing class and margaritas this weekend.
CONGRESS & COURTS・20 HOURS AGO
WashingtonExaminer

Democrats, now entering a second year in control of both Congress and the White House, are beginning to fill the legislative calendar with a less ambitious agenda that veers far from the liberal wish list items that the party had hoped to pass into law by now.
CONGRESS & COURTS・1 DAY AGO
WashingtonExaminer

President Joe Biden told the nation's mayors Friday there was an immediate need to pass his Build Back Better social spending bill, in whatever form that may now take.
BUSINESS・1 DAY AGO
MarketWatch

McConnell said "African-American voters are voting in just as high a percentage as Americans."
CONGRESS & COURTS・17 HOURS AGO

The veteran Democrat said African Americans were "quite aggrieved" by new voting restrictions across the country.
CONGRESS & COURTS・21 HOURS AGO
The Guardian

"I've never been accused of this kind of thing before. It's hurtful," Mitch McConnell said after being slammed for his remarks.
CONGRESS & COURTS・1 DAY AGO
Newsweek

Martin Luther King Jr.'s son told Newsweek 'I don't think history is going to treat them well," after the lawmakers voted with the GOP.
CONGRESS & COURTS・1 DAY AGO

Mitch McConnell caused many jaws to drop on Twitter when he responded to a question from a journalist about concerns of voters of colour.The Senate minority leader was speaking alongside members of Republican leadership at a press conference on Wednesday evening when he was asked by Latino Rebels correspondent Pablo Manriquez about his message to voters afraid that without voting access protections that would be in place if the Democrats’ voting rights legislation were to pass, they will be unable to vote.His response elicited a wave of criticism on Twitter for a choice of words that appeared to establish...
CONGRESS & COURTS・1 DAY AGO
Fox News

Charlamagne Tha God blames Biden, Sinema, Manchin for 'the death of the Democratic Party as we know it'

Liberal radio personality Charlamagne Tha God took aim at President Biden and Sens. Kyrsten Sinema, D-Ariz., and Joe Manchin, D-W.V., declaring the three of them as "responsible" for the "death of the Democratic Party as we know it." "People are asking if we are witnessing the death of democracy in...
PRESIDENTIAL ELECTION・1 DAY AGO
NBC News

Manchin says he's ready to talk. Can Democrats sell him on a new 'Build Back Better'?

WASHINGTON — Democrats are working to resuscitate President Joe Biden’s top domestic priority after it flatlined last month amid opposition from Sen. Joe Manchin, D-W.Va., a pivotal vote with the power to make or break the ambitious bill. The path to a deal revolves around the elusive question...
INCOME TAX・1 DAY AGO
Newsweek

Martin Luther King III told Newsweek he was "greatly disappointed" that voting legislation could not proceed in the Senate.
PRESIDENTIAL ELECTION・1 DAY AGO

Jan 21 (Reuters) - Several U.S. House members from President Joe Biden's Democratic Party are threatening to block a renewed push for his Build Back Better spending bill if it does not include the expansion of a federal deduction for taxes paid to states and local entities. Expanding the deduction,...
INCOME TAX・1 DAY AGO
Business Insider

"He has confidence in the American people. And we're going to do everything we can to protect people's rights," Psaki said.
PRESIDENTIAL ELECTION・2 DAYS AGO
The Independent

Vice President Kamala Harris struck a defiant tone as Democrats’ bid to pass voting rights reforms failed to pass the Senate late Wednesday evening.“We are not giving up,” Ms Harris told The Independent. “We will not give up.” The Senate failed to pass voting rights on a 49 to 51 basis with Senate Majority Leader Chuck Schumer voting against it so as to bring up the bill later this year. Speaking to reporters earlier she said: “I’m here tonight because this is a historic night, and history is going to record – and watch, certainly – the votes that are taking place.“This...
PRESIDENTIAL ELECTION・2 DAYS AGO
MarketWatch

A $1.8T Build Back Better compromise Manchin offered the White House in December is off the table. "We'll just start with a clean sheet of paper."
PRESIDENTIAL ELECTION・2 DAYS AGO
New Jersey Monitor

WASHINGTON — A bipartisan group of senators is exploring legislation to overhaul how Congress counts Electoral College votes, but backers of stalled voting rights legislation are lukewarm on the effort as a substitute. The Electoral Count Act is an obscure law that has come under recent scrutiny, a year after the Jan. 6 attack on […] The post With voting rights stalled, some senators mull an update to the Electoral Count Act appeared first on New Jersey Monitor.
PRESIDENTIAL ELECTION・1 DAY AGO
Fox News

FIRST ON FOX: Dozens of Republican lawmakers in the House and Senate are requesting the Department of Homeland Security’s Office of Inspector General (DHS OIG) launch an investigation into the actions taken by the Biden administration in relation to the crisis at the southern border. More than 100 lawmakers,...
PRESIDENTIAL ELECTION・2 DAYS AGO
Business Insider