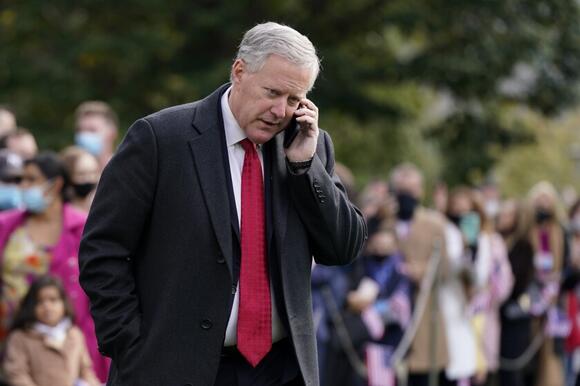 Mark Meadows, Donald Trump's former chief of staff, is cooperating with a House panel investigating the Jan. 6 Capitol insurrection and providing some documents, putting off for now the panel's threat to hold him in contempt, the committee's chairman said Tuesday.

But the panel “will continue to assess his degree of compliance,” Mississippi Rep. Bennie Thompson said in a statement.

The agreement comes after two months of negotiations between Meadows and the committee and after the Justice Department indicted longtime Trump ally Stephen K. Bannon for defying a subpoena .

Thompson said Meadows has produced records and will soon appear for an initial deposition.

Meadows' lawyer, George Terwilliger, said he was continuing to work with the committee and its staff on a “potential accommodation” that would not require Meadows to waive executive privilege nor “forfeit the long-standing position that senior White House aides cannot be compelled to testify before Congress," as Trump has argued.

“We appreciate the Select Committee’s openness to receiving voluntary responses on non-privileged topics,” Terwilliger said in a statement.

The tentative agreement with Meadows highlights the committee's efforts to balance its need for information about Trump's role in the violent insurrection with the former president's assertions — including in an ongoing court case — that Congress cannot obtain information about his private conversations with top aides at the time.

While the committee has rejected Trump's arguments and President Biden has waived the privilege as the current executive, the panel wants to move quickly and avoid lengthy legal entanglements that could delay the investigation.

Terwilliger had previously made clear that Meadows wouldn't comply with the panel's September subpoena because of Trump's executive privilege claims. The committee rejected those arguments, especially after the White House said that Biden would waive any privilege over Meadows’ interview and as courts shot down Trump’s efforts to stop the committee from gathering information.

The House panel argued that it has questions for Meadows that do not directly involve conversations with Trump and couldn’t be blocked by privilege claims.

In the committee’s subpoena, Thompson cited Meadows’ efforts to overturn Trump’s 2020 election defeat and his pressure on state officials to push the former president’s false claims of widespread voter fraud.

The committee has scheduled a vote for Wednesday to pursue contempt charges against a separate witness, former Justice Department official Jeffrey Clark, after he appeared for a deposition and declined to answer questions .

The House minority leader, who helped scuttle an attempt to establish a bipartisan commission to investigate the insurrection, has spent months thrashing the select committee.
WASHINGTON, DC・20 HOURS AGO
Business Insider

Newt Gingrich suggested January 6 investigators could face jail time in a GOP-led Congress. He said that soon after a longtime ex-aide got a subpoena.
CONGRESS & COURTS・21 HOURS AGO
The Guardian

Liz Cheney among those to condemn remarks by former House speaker as committee member Zoe Lofgren says: ‘I think Newt has really lost it’
CONGRESS & COURTS・2 DAYS AGO
The Guardian

On Sunday the GOP lawmaker was asked about a proposed plan shared in the Trump White House to seize voting machines after the 2020 election.
CONGRESS & COURTS・2 DAYS AGO
WEKU

The House panel looking into last January's attack on the Capitol is investigating a plan that would have directed the secretary of defense to seize voting machines in battleground states, Jan. 6 Committee Chairman Rep. Bennie Thompson, D-Miss., told Face the Nation on Sunday. "If you are using the military...
PRESIDENTIAL ELECTION・2 DAYS AGO
The Associated Press

WASHINGTON (AP) — The National Archives and Records Administration has provided a House committee with more than 700 pages of presidential documents after the Supreme Court rejected a bid by former President Donald Trump to block the release. The House panel investigating the Jan. 6, 2021, Capitol insurrection received...
WASHINGTON, DC・4 DAYS AGO
Reuters

WASHINGTON, Jan 20 (Reuters) - The U.S. House of Representatives' panel investigating the deadly Jan. 6, 2021, attack on the U.S. Capitol on Thursday requested an interview with former U.S. President Donald Trump's daughter and White House aide Ivanka Trump. In a letter to Ivanka Trump, lawmakers said they were...
POTUS・5 DAYS AGO

Trump had sought to block the documents by arguing the records should remain confidential so presidents can receive candid advice from aides.
PRESIDENTIAL ELECTION・6 DAYS AGO
The Associated Press

WASHINGTON (AP) — The House committee investigating the U.S. Capitol insurrection issued subpoenas to Rudy Giuliani and other members of Donald Trump’s legal team who filed bogus legal challenges to the 2020 election that fueled the lie that race had been stolen from the former president. The committee...
POTUS・7 DAYS AGO
Washington Times

The House Jan. 6 Committee on Thursday sent a letter to Ivanka Trump seeking her voluntary cooperation in the probe of the attack on the U.S. Capitol. The panel said Ms. Trump, the daughter of former President Donald Trump and a top adviser in his White House, was “in direct contact with the former president at key moments on January 6th” and “may have information relevant to other matters critical to the Select Committee’s investigation.”
POTUS・6 DAYS AGO
Washington Post

The Biden White House has forced the resignation of a Trump-appointed member of a U.S. commission who has promoted the baseless claim that the FBI planted agents among the pro-Trump mob that stormed the Capitol on Jan. 6. Darren Beattie was named by former president Donald Trump to the U.S....
PRESIDENTIAL ELECTION・11 DAYS AGO

The subpoenas for Andrew Surabian, Arthur Schwartz and Ross Worthington indicate investigators are inching ever closer to the Trump family.
WASHINGTON, DC・13 DAYS AGO
bulletin-news.com

The House panel investigating the U.S. Capitol insurgency has asked House Minority Leader Kevin McCarthy for an interview and records, as it continues to seek first-hand accounts from members of Congress about former President Donald Trump’s actions on the day hundreds of his supporters brutally beat police, stormed the building, and disrupted the certification of the 2020 election.
PRESIDENTIAL ELECTION・13 DAYS AGO
Axios

The National Archives on Thursday evening released records of former President Trump's White House to the House Jan. 6 Select Committee, the agency said. Why it matters: The committee now has documents that Trump attempted to keep hidden, arguing that their release would undermine his executive privilege. The Justice Department...
POTUS・4 DAYS AGO

The House select committee investigating the Jan 6 attack on Congress is seeking an interview with former Attorney General William Barr following the shocking revelation first reported by Politico that Donald Trump’s allies drafted an executive order directing the seizure of voting machines.Rep Bennie Thompson, the committee’s chairman, made the announcement on Sunday during an interview with ABC News. He added that lawmakers on the panel have spoken with Mr Barr previously in the course of their investigation, but were now interested in learning more about the draft executive order created some time in December of 2020.Appearing on This...
PRESIDENTIAL ELECTION・2 DAYS AGO
POLITICO

Investigators want to know more about her intervention to try to convince former President Donald Trump to address the Capitol mob during the attack.
POTUS・5 DAYS AGO
NBC News

Unsold 2021 SUVs Now Almost Being Given Away: See Prices. 16 Highly Unnecessary Things Adults Waste A Fortune On In California. If You Need To Kill Time On Your Computer, This Vintage Game Is A Must-Have. No Install. Undo. YourPennySaver /. SPONSORED. 16 Silly Things Adults Are Doing To Cut...
CALIFORNIA STATE・7 DAYS AGO
POLITICO

"Fraud is fraud, no matter who commits it or what party they prefer,” said Chris Hartline, a spokesperson for the NRSC.
TALLAHASSEE, FL・20 HOURS AGO