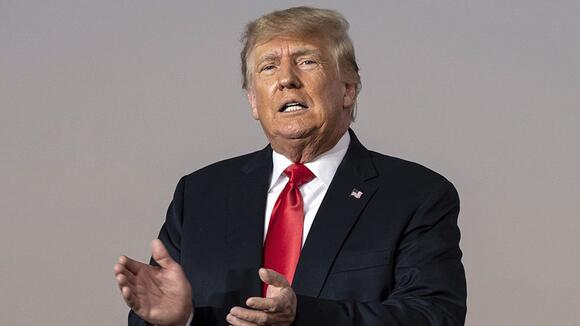 A three-judge panel for the D.C. Circuit Court of Appeals grilled Trump's lawyers during a hearing that lasted more than three hours on Tuesday, a sign that the former president will likely lose the latest round in the case.

Judge Patricia Millett said that she believes "the burden is on the former president to come forward with some reason" with enough weight to back up his claims of executive privilege and counter President Biden 's decision to waive that privilege.

"The former president's going to have to come back with some interest, something that's missed in that calculation, some supervening interest, and it won't be enough to go, 'See, I told you it was an executive privilege document.' You're going to have to come up with something more powerful that's going to outweigh the incumbent president's decision to waive executive privilege," said Millett, an appointee of former President Obama .

Justin Clark, one of the attorneys representing Trump in the case, responded that the stakes in the case posed "constitutional harm to the executive branch"

Trump sued last month to block the National Archives from complying with the select committee's expansive records request, citing executive privilege over the internal communications with his advisers and top officials.

A district court judge quickly rejected his lawsuit, ruling that Trump, as a former president, has little authority to prevent the current president from waiving executive privilege over the records held by the National Archives.

The case is presenting the courts with an unprecedented scenario in which a former president is challenging a current president's privilege waiver. At issue in the case is whether Trump has the authority to prevent the documents from being handed over, even though they are in the custody of an executive branch agency.

The judges seemed to struggle to come up with any scenario where a former president could interfere with the actions of a sitting administration.

"We have one president, we have one president at a time under our Constitution," Millett said. "And the incumbent president has said, has made the judgment and is best positioned, as the Supreme Court has told us, to make that call as to the interests of the executive branch."

While the Supreme Court has ruled that former presidents have some authority to assert executive privilege, the scope of that power is largely unsettled.

The 1978 Presidential Records Act dictates the circumstances under which a recently departed president's documents can be accessed.

The law gives former presidents the ability to challenge the archives' determinations over the release of their records, but the three D.C. Circuit judges appeared frustrated on Tuesday that there is little guidance on how courts should handle such lawsuits.

"It doesn't tell us what to do," said Judge Ketanji Brown Jackson, who was appointed by Biden and also appeared unwilling to accept Trump's arguments.

Clark argued that when Congress was creating the law, it debated how to avoid instances "where the archivist could be susceptible to possible pressure from the incumbent president to release embarrassing and inappropriate material concerning a predecessor or rival," saying that the lawmakers' intent behind the law was relevant in Trump's case.

Douglas Letter, the House's general counsel, told the judges that the courts should defer to the sitting president's determination on weighing executive privilege instead of trying to come up with a balancing test that weighs the interests of the various parties.

Brian Boynton, an acting assistant attorney general in the Justice Department's Civil Division who is representing the Biden administration, also argued that if the court felt the need to weigh Trump's claims of executive privilege against the current president's waiver, it would have to give greater weight to the latter.

"I recommend that the court review deferentially the incumbent's decision that it is in the interest of the United States not to assert privilege," Boynton said. "I think that would be an appropriate test, if the court were to determine that some test had to apply here."

The case has progressed through the courts at a rapid pace, and while the judges on Tuesday acknowledged the urgency behind the select committee's investigation, they did not indicate when they might issue a ruling.

The order paves the way for 700 documents related to the events of January 6 to be transferred to the committee.
CONGRESS & COURTS・2 DAYS AGO
Newsweek

In a blow to former President Donald Trump, the Supreme Court ruled that the House select committee investigating the riot could be handed his White House papers.
CONGRESS & COURTS・2 DAYS AGO
Washington Post

The trove of documents — which former President Donald Trump fought to keep private — could reveal whom the former president talked to on Jan. 6.
CONGRESS & COURTS・1 DAY AGO

Money is the lifeblood of our often-poisonous political system. Our nation’s highest court has allowed an increasing amount of such blood to pump freely throughout our body politic. The Supreme Court is now considering when and how candidates can raise money after elections to give themselves infusions. Money is...
CONGRESS & COURTS・2 DAYS AGO
Wyoming News

(The Center Square) – The U.S. Supreme Court this week appeared to be sympathetic to arguments made by a petitioner against the city of Boston over its policy that prohibited a private “Christian” flag from being flown in front of City Hall. Liberty Counsel Founder and Chairman Mat Staver presented oral arguments before the court on Tuesday on behalf of Boston resident Hal Shurleff and his Christian civic organization, Camp Constitution. In Shurtleff v. Boston, he argued that Boston’s policy violated the First Amendment by...
BOSTON, MA・2 DAYS AGO
Reuters

(Reuters) - The 7th U.S. Circuit Court of Appeals on Tuesday indicated some skepticism over a claim that Indiana University's COVID-19 vaccination requirement for students and faculty was unlawful and should be blocked. A three-judge panel of the Chicago-based 7th Circuit heard arguments for about 30 minutes by video, a...
INDIANA STATE・10 DAYS AGO
Newsweek

Experts say the House committee investigating the Capitol riot has hundreds of pages of documents and more potential testimonies that can prove to be explosive.
POTUS・22 HOURS AGO

The US attorney's office that Giuliani once led obtained access to thousands of his messages and communications as part of its criminal investigation.
U.S. POLITICS・17 HOURS AGO
Newsweek

The Jan. 6 select panel has obtained the draft order and a document titled "Remarks on National Healing." Both are reported here in detail for the first time.
POTUS・14 HOURS AGO
Newsweek

Martin Luther King Jr.'s son told Newsweek 'I don't think history is going to treat them well," after the lawmakers voted with the GOP.
CONGRESS & COURTS・22 HOURS AGO

A Texas court ruling has prompted the state’s Republican attorney general to admit that the party is “done in Texas” electorally if anyone can now vote. The comments come from Ken Paxton, who is currently embroiled in a number of controversies relating to his office's investigation into possible voter fraud.Mr Paxton’s comments come after a Court of Appeals decision which will effectively strip him of the authority to prosecute “voter fraud”, with that now exclusively the job of local DAs. Since there is no appeal process, all he can do now is ask for a rehearing. Speaking on Steve...
PRESIDENTIAL ELECTION・2 DAYS AGO
Business Insider

"I've never been accused of this kind of thing before. It's hurtful," Mitch McConnell said after being slammed for his remarks.
CONGRESS & COURTS・19 HOURS AGO
Fox News

A former member of the Obama administration pushed back after President Biden brushed aside a question from a Fox News reporter about allowing Russian President Vladimir Putin to make the first move in Ukraine and called it "stupid." "It isn't a stupid question," former Obama Director of Global Engagement Brett...
PRESIDENTIAL ELECTION・1 DAY AGO
Newsweek

The Idaho Republicans sent the MyPillow founder a $6,000 bill to cover the cost of an election review conducted to disprove the election lies.
IDAHO STATE・23 HOURS AGO
Fox News

White House press secretary Jen Psaki was confronted Friday over President Biden's dismissal of a question about the Russia-Ukraine conflict as "stupid," saying he did in fact not dismiss the idea of "proactive deterrence." Biden was caught on a hot mic muttering "what a stupid question" after Fox News correspondent...
PRESIDENTIAL ELECTION・19 HOURS AGO
The Independent

The wife of one of the Supreme Court justices who could be charged with deciding whether the House January 6th select committee can view Trump administration White House records has signed on to an open letter calling for the committee’s two Republican members to be ousted from the House GOP conference. Virginia “Ginny” Thomas, a longtime conservative activist and the wife of Justice Clarence Thomas, was one of more than 60 signatories to the open letter, which was organised by the pro-Trump Conservative Action Project and asks House Minority Leader Kevin McCarthy to “act immediately to remove” Reps Liz...
CONGRESS & COURTS・3 DAYS AGO
The Associated Press