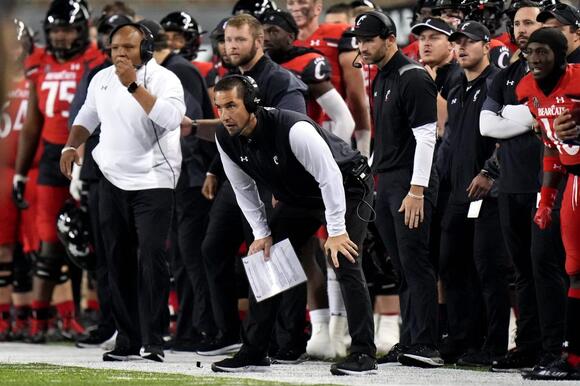 Fickell is less than ten wins away from being UC's all-time winningest coach.

Fickell commented on the big news and made it clear he's focused on this team, these players, and the 2021 AAC Championship game on Saturday against No. 24 Houston.

"I don't know what there is to address," Fickell said about the opening. "I don't talk to a whole lot of people. There is nothing. That's the crazy thing. It's all whatever is being said out there and different things. There is no speculation. Is the job open? I guess it is. I wouldn't know if someone didn't tell me. Most importantly, all I care about is the guys on this team."

According to BetOnline , Fickell has the second-lowest odds to take over the job, behind Notre Dame defensive coordinator Marcus Freeman.

Make sure you bookmark All Bearcats for the latest news, exclusive interviews, film breakdowns and so much more!

The All Bearcats UC Football MVPs

UC Football Moves up to No. 3 in Latest AP Poll

Bearcats Move up to No. 4 in Historic CFP Rankings

Preview: History on the Line for Wes Miller as Bearcats Face Presbyterian

Russillo shares his thoughts on all six Round 1 NFL playoff matchups (0:37) before revisiting the NFL playoff draft from November with Ceruti and Kyle (13:10). Then Ryen is joined by Cincinnati football head coach Luke Fickell to discuss the 13-0 regular season, matching up with Alabama in the CFP semifinal, QB Desmond Ridder, his friendship with Titans head coach Mike Vrabel, his season as Ohio State interim head coach, building the program at Cincinnati, and more (20:27). Then Ryen talks with Ozark showrunner Chris Mundy about building the show’s characters, the difficulty of trimming story lines, writing for kids, working with Jason Bateman, and more (50:18). Finally Ryen answers some listener-submitted Life Advice questions (1:24:04).
NFL・2 DAYS AGO
FanSided

The Ohio State football program was in a rough spot back in 2011. Jim Tressel had just gotten fired due to the tattoo scandal. They ended up being coached by Luke Fickell that season. The season wasn’t a successful one, as they finished a poor 6-7. Fickell only led...
OHIO STATE・9 HOURS AGO
On3.com

The Big Ten is getting an influx of SEC talent, as Missouri quarterback Connor Bazelak is coming to the conference. On Thursday, Bazelak announced he was committing to join the Indiana Hoosiers. Indiana had a hole at the quarterback position when former quarterback Michael Penix announced he was transferring to...
NEBRASKA STATE・10 DAYS AGO
ClutchPoints

Bo Jackson is a former professional baseball and football player and is considered to be one of the greatest athletes of all time due to his achievements in multiple sports. He is the only professional athlete in history to be named an All-Star in both the MLB and NFL. In this article, we’ll take a look at Bo Jackson’s net worth in 2021.
MLB・18 DAYS AGO

Arch Manning, the nephew of Peyton and Eli Manning, is the top college football recruit in the country. The five-star quarterback has scholarship offers from nearly every major program. The class of 2023 product has been taking his time with his recruitment, though he could be getting closer to a...
COLLEGE SPORTS・16 HOURS AGO
The Spun

Omar Kelly: Can we stop pretending Dolphins QB Tua Tagovailoa has been set up to succeed?

Tua Tagovailoa was a disaster in Miami’s 34-3 loss to the Tennessee Titans, who won the AFC South with the victory on Sunday. With a postseason berth on the line, when the stakes couldn’t have been any higher, the Miami Dolphins’ starting quarterback face-planted. He fumbled the...
MIAMI, FL・12 DAYS AGO
On3.com

New Bern (N.C.) defensive lineman Keith Sampson Jr. is down to five schools, he announced on Saturday. Sampson is the No. 198 prospect in the 2023 class, according to the On3 Consensus, a complete and equally weighted industry-generated average that utilizes all four major recruiting media companies. He ranks as the nation’s No. 27 defensive lineman and the No. 5 prospect in North Carolina.
FOOTBALL・1 DAY AGO

Alabama quarterback Stone Hollenbach, a former Crimson Tide walk-on, has committed to play at Western Michigan, he announced on Twitter. The 6-foot-3, 208-pound signal caller never played a snap at Alabama but figures to factor more into the game plan with the Broncos in 2022. He first announced on Twitter...
COLLEGE SPORTS・7 HOURS AGO
The Spun

Arguably one of the greatest linebackers to ever step foot on the football field, Zach Thomas, is still waiting to hear his name called for the Hall of Fame. During his illustrious career, Thomas racked up 1,734 tackles, 20.5 sacks, 16 forced fumbles, 74 tackles for loss and 17 interceptions. In 13 NFL seasons he earned five All-Pro honors, seven Pro-Bowl appearances and twice lead the league in tackles.
NFL・2 DAYS AGO
The Spun

Tua Tagovailoa’s up-and-down performance through his first two NFL seasons has raised some questions about his status as a longterm franchise QB for the Miami Dolphins. But on Saturday, reports from NFL Network insider Ian Rapoport indicated that the team is sticking by their former No. 5 overall pick.
NFL・1 DAY AGO
USA TODAY

It felt like January 1991 again for Sal Maiorana as Josh Allen and the Buffalo Bills put forth perhaps the best performance in team history.
NFL・1 DAY AGO

National champion Georgia will have big shoes to fill after Nakobe Dean, Travon Walker and Lewis Cine were among players to declare for the NFL draft.
NFL・2 DAYS AGO
The Spun

Bruce Arians Reveals Why He Smacked A Buccaneers Player

The Tampa Bay Buccaneers had a pretty easy win over the Philadelphia Eagles in the Wild Card round on Sunday afternoon. However, things got a little tense on the Buccaneers sideline late in the second half. Tampa Bay head coach Bruce Arians was seen smacking one of his players in...
NFL・8 HOURS AGO
All Bearcats

The junior just had an impressive showing at the National Combine.
CINCINNATI, OH・2 DAYS AGO
Sportsnaut

Since firing Mike Zimmer and Rick Spielman, the Minnesota Vikings have been doing their due diligence on putting together new
NFL・2 DAYS AGO

NFL World Reacts To Awful Penalty In Bucs vs. Eagles

It didn’t take very long for us to get a highly questionable penalty in the Tampa Bay Buccaneers vs. Philadelphia Eagles game. On the Buccaneers’ first drive of the game, the Eagles were called for a very questionable roughing the passer penalty on Tom Brady. Brady was hit...
NFL・12 HOURS AGO
Larry Brown Sports

Eagles’ Josh Sweat was admitted to hospital for ‘life-threatening’ situation

Philadelphia Eagles defensive end Josh Sweat will not play in Sunday’s game against the Tampa Bay Buccaneers, but there was a point this week where football probably was not at the forefront of his mind. Sweat was admitted to the hospital on Tuesday for a situation that the Eagles...
NFL・13 HOURS AGO
The Spun

The Las Vegas Raiders find themselves down 10 to the Bengals in the fourth quarter of their first round playoff matchup. But the team doesn’t get there without the leadership and play of Derek Carr. On Saturday, inactive Raiders running back Kenyan Drake had a message for those still...
NFL・1 DAY AGO
CougsDaily