The metaverse is a massive opportunity for crypto that calls for new platforms and tokens, Bank of America strategist says 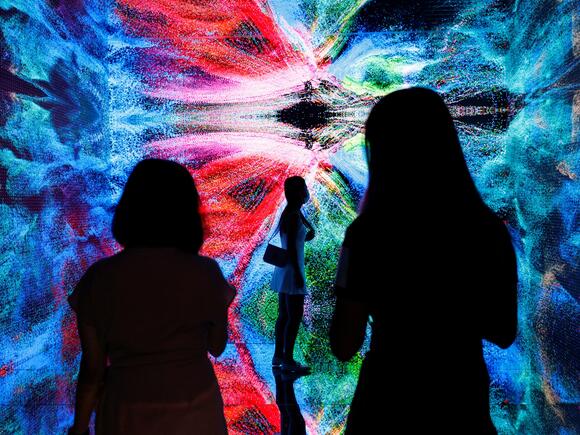 The metaverse is a massive opportunity for blockchain technology, and it will finally cause cryptocurrencies to start being used widely for transactions, according to a strategist at Bank of America.

Haim Israel told Insider Tuesday that the metaverse is likely to drive a boom in development in the crypto world, as people race to create virtual-world platforms.

"I definitely believe this is a massive, massive opportunity," the head of global thematic investment strategy at BofA said. "You need the right platforms … that is definitely going to be a big opportunity for this entire ecosystem."

Israel predicted that the metaverse is where "we're going to start using cryptocurrencies as currencies." But he said existing digital currencies are likely to prove too volatile for this, and so some types of stablecoins will probably come to dominate.

The metaverse is a catch-all term referring to a range of online 3D virtual environments in which people can play games, build things, socialize, work, and even trade and earn crypto assets.

Interest in the metaverse has soared after Facebook said in October it would change its name to Meta, to signal its commitment to building out its own platform. Big companies and crypto developers alike are racing to build digital worlds.

One popular platform, Decentraland, uses decentralized crypto technology to enable users to buy virtual plots of land, build their own structures, and vote on the governance of the economy.

A parcel of real estate on Decentraland recently sold for $2.4 million , as fans turn to digital properties and land as a speculative investment. Republic Realm paid $4.3 million for a property in The Sandbox metaverse on Tuesday.

BofA's Israel said it looks as though the metaverse will be where people finally start widely using cryptocurrencies for transactions.

The idea is that cryptocurrencies go hand-in-hand with the blockchain technology underpinning some of the new virtual worlds. That allows metaverses to remain decentralized, rather than under the control of tech companies or payment providers.

Yet Israel said many digital currencies are far too volatile to become used widely for transactions. That means metaverse developers are likely to turn to stablecoins , which are pegged to stable counterparts such as the US dollar.

The BofA strategist predicted that traditional payments companies will become much more interested in cryptocurrencies, if they become widely used in the metaverse. "I see a lot of collaboration between the two," he said.

While excitement around the metaverse has grown, many people are more skeptical. They point out that virtual worlds have been around for decades — Second Life, for instance — and that virtual-reality headsets have never really taken off.

Others question whether cryptocurrencies really will gain wide adoption, and are not sure that tech giants like Facebook won't end up dominating whatever the metaverse turns out to be.

"I am not convinced the metaverse will be user-owned or decentralized if it is developed by Meta, Microsoft, Apple, etc. (which is where $10B's are being spent to develop it!)," Ben Gilbert, venture capital executive at PSL, tweeted earlier this month.

Raj Gokal, co-founder of cryptocurrency network solana, shared his own misgivings in a tweet last week.

"I worry that the metaverse is overhyped (industry-wide)," Gokal said. "I haven't seen this much hype in mainstream media over an unreleased product or category of products, maybe ever."

Read more: Famed venture capital investor Matthew Ball breaks down why big-tech corporations are racing to transform themselves into metaverse companies — and shares 6 stocks to play the opportunity that could 'drive multi-trillion dollars of value'

Top YouTube trader Meet Kevin said he's sold almost his entire $20 million portfolio of stocks and crypto. He said he's worried that markets have not yet reached "peak fear" and have further to fall. Data shows that retail investors were more reluctant than usual to "buy the dip" during...
STOCKS・1 DAY AGO
The Motley Fool

It has staying power.
MARKETS・1 DAY AGO
The Motley Fool

A little money can go a long way after stocks and crypto have corrected sharply in recent days.
STOCKS・4 HOURS AGO

Another day another Rug Pull scam that involves exploiting of smart contract vulnerability. Scammers are exploiting misconfigurations in smart contracts to create fake cryptocurrency tokens to steal funds from innocent users. According to researchers at Check Point, this newly identified token fraud includes concealing backdoor routines and hiding around 99% of fee functions. This scam comes despite the ongoing crypto market volatility as rates of a majority of the popular coins, including Bitcoin, have plunged considerably.
PUBLIC SAFETY・23 HOURS AGO
The Motley Fool

Bank of America says stablecoin adoption and CBDC is ‘inevitable’

It appears that the U.S. will finally be moving forward to create its own central bank digital currency (CBDC) according to the Bank of America. Bank of America crypto strategists Andrew Moss and Alkesh Shah wrote in a Jan. 24 note that CBDCs “are an inevitable evolution of today’s electronic currencies,” according to a Bloomberg report. The analysts wrote:
MARKETS・16 HOURS AGO
ZDNet

CIOs have a massive opportunity ahead. But there's a new threat on the horizon, too

The outlook for CIOs is positive right now: demand for their skills is up, IT budgets are rising, and the board is keen to see where digital transformation takes the business next. For tech chiefs with the right focus, the opportunities to make a long-term mark on behalf of the...
ECONOMY・3 HOURS AGO

Investors should get familiar with this fast-growing blockchain.
MARKETS・1 DAY AGO
Markets Insider

US crypto mining poses a supply risk to public power utilities, according to Fitch Ratings

Crypto mining could pose power supply issues for US public utilities, Fitch Ratings said. The mining process is highly energy intensive and can increase a utility's electric load, Fitch said. The US is now the biggest bitcoin mining hub in the world. Sign up here for our daily newsletter, 10...
ENERGY INDUSTRY・3 HOURS AGO
GOBankingRates

Following the long-awaited Fed discussion paper about the pros and cons of a potential U.S. central bank digital currency (CBDC) on Jan. 20, Bank of America economic analysts said they anticipate a...
CURRENCIES・46 MINUTES AGO
The Motley Fool

Looking for the next Ethereum? These crypto assets could make you richer.
COMMODITIES & FUTURE・6 HOURS AGO
The Motley Fool

The timing of a positive Dogecoin tweet from Tesla's CEO could have been the catalyst for the crypto's bounce.
STOCKS・3 HOURS AGO
MarketWatch

The Big Tech earnings boom is over, and investors are now searching for safety

Big Tech's massive growth during the COVID-19 pandemic reached its peak and its limit in 2021, and investors are now searching for safety as the outlook for the new year is looking glummer with every new earnings report.
STOCKS・1 HOUR AGO
Markets Insider

US stock futures fall as investors shun risky assets ahead of the key Fed rate meeting, while the crypto sell-off persists

US futures fell Monday after stocks suffered their worst week since the March 2020 sell-off. The rout in crypto markets showed little sign of abating, with tokens deep in the red. Investors have dumped speculative assets as they brace for the Fed to hike rates in 2022. US stock futures...
STOCKS・1 DAY AGO
Markets Insider

Full-service cryptocurrency trading and investment platform Phemex continues to show its strength in backing metaverse-based projects, exhibited by the listing of a bevy of metaverse-first tokens, such as Axie Infinity’s AXS and Decentraland’s MANA. To celebrate Phemex is hosting a special Metaverse edition of their popular Grab a Coin Campaign where users can join to win YGG.
MARKETS・1 DAY AGO
New York Post

US digital currency is ‘inevitable,’ Bank of America says

The United States is likely just a few years away from implementing a national digital currency, according to analysts at Bank of America. The idea of digital coin issued by the US government, known as central bank digital currencies (CBDCs), have gained prominence in recent years alongside the rise of leading crypto tokens such as Bitcoin, which isn’t tied to any government institution.
ECONOMY・5 HOURS AGO
Markets Insider

MicroStrategy extended its two-day decline to 30% on Monday amid a meltdown in bitcoin prices. Adding to the decline was the SEC's rejection of MicroStrategy's crypto accounting practices. CEO Michael Saylor has raised debt to buy nearly 125,000 bitcoins at an average price of $30,159. Sign up here for our...
STOCKS・1 DAY AGO