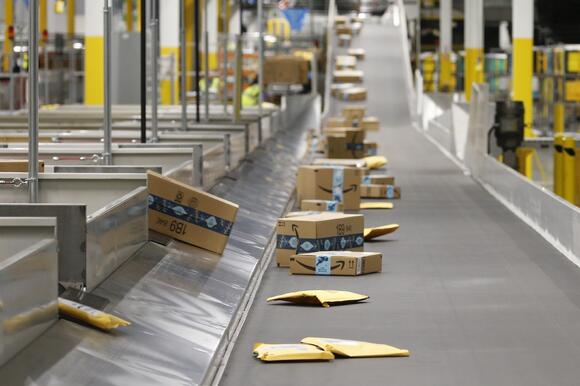 Cyber Monday ain’t what it used to be.

The earlier-than-usual spending this holiday season has taken its toll on the biggest online shopping day of the year.

According to Adobe , Cyber Monday generated $10.7 billion in e-commerce revenue for U.S. retailers, down 1.4 percent from last year’s $10.8 billion total —a dip of approximately $100 million. Salesforce had a more positive calculation, with Cyber Monday sales coming in at 3 percent growth to $11.3 billion compared to 2020.

The results came in after Black Friday already showed tepid sales. Adobe said the day’s sales dipped nearly $100 million from $9 billion to $8.9 billion, while Salesforce once again had a more bullish estimate at up 5 percent to $13.4 billion. Adobe projected that Cyber Monday sales would fall within $10.2 billion and $11.3 billion, and late Monday night narrowed the expectation down to between $10.4 billion and $11.1 billion.

As of 9 p.m. ET on Monday, consumers had spent $7.1 billion throughout the shopping day, equivalent to $6.5 million spent every minute. In the peak hour of 11 p.m. to 12 a.m. ET, consumer spend skyrocketed to $12 million every minute with help from the West Coast.

“With early deals in October , consumers were not waiting around for discounts on big shopping days like Cyber Monday and Black Friday,” said Taylor Schreiner, director, Adobe Digital Insights, in a statement. “This was further fueled by growing awareness of supply chain challenges and product availability. It spread out e-commerce spending across the months of October and November, putting us on track for a season that still will break online shopping records.”

The analysis was based on Adobe Analytics data, covering more than 1 trillion visits to U.S. retail sites, 100 million SKUs and 18 product categories, which the firm claims is more than any other technology company or research organization.

Salesforce’s optimism extended throughout the week, with the CRM giant saying that U.S. digital sales rose 4 percent to $61 billion, a new all-time high. To generate its holiday results, the company analyzed global shopping data from more than 1 billion consumers on its Commerce Cloud and Marketing Cloud platforms, used by 24 of the top 30 U.S. online retailers.

Current supply chain bottlenecks likely contributed to the early shopping shift, but have also been the catalysts to one of retail’s current problem areas: inventory. On Cyber Monday, the prevalence of out-of-stock messages was up 8 percent compared to the week before (on Nov. 22).

Through November, the prevalence of out-of-stock messages is up 169 percent compared to pre-pandemic levels from January 2020, and up 258 percent versus November 2019. Adobe expects the out-of-stocks to persist through the rest of December.

Salesforce backed up the out-of-stock data, indicating that the number of products being sold from last Tuesday through Cyber Monday shrank 6 percent, both in the U.S. and globally, compared to last year. This is a big turnaround from 2020, when product catalogues grew 5 percent in the U.S. and 1 percent globally when many non-essential retail stores were still shuttered due to pandemic lockdowns.

“Despite a rush on early holiday shopping due to concerns over product availability and rising prices, Cyber Monday still saw moderate growth in digital sales. In fact, one out of every three people in the U.S. purchased online on Cyber Monday,” said Rob Garf, vice president and general manager of Retail at Salesforce, in a statement.

So far, from Nov. 1 through Cyber Monday, consumers in the U.S. have spent $109.8 billion online, which is up 11.9 percent year over year, Adobe said. And on 22 of those days, consumers purchased more than $3 billion worth of goods, another new milestone. In 2020, only nine days topped $3 billion at this point.

Salesforce tagged the U.S. consumer spending since Nov. 2 at $136 billion, up 9 percent year over year. Global consumers have spent $593 billion, an increase of 3 percent, online since the start of the holiday season.

Both tech firms agreed that there has been a major impact from inflation , both on overall spending and the rolling back of discounts. Adobe said consumers saw the final price point of their shopping carts jump 13.9 percent on Cyber Monday, and up 19 percent in the season overall.

Over the full Tuesday-to-Cyber Monday “Cyber Week,” the average selling price in the U.S. was up 11 percent, and 5 percent globally compared to last year, Salesforce said.

Meanwhile, the average discount over Cyber Week was 26 percent in the U.S. and 24 percent globally, both totals down 8 percent from the year-ago period.

Adobe expects that starting Tuesday, discounts will generally begin to fade into the 5 percent to 10 percent range as shipping costs continue to rise.

Risk officers may want to take note of a new report out from Everstream Analytics, as companies seek to manage supply chain headaches this year. Everstream, a cloud-based provider of supply chain analytics, outlined five trends it sees as a risk to companies’ supply chains in its annual report released this week. These areas to watch include water supply shortages, ocean freight congestion, labor issues, just-in-case inventory strategies and the evolving regulatory environment. That’s a switch up from the prior year’s report pointing to more localized supply chains, insolvencies for smaller suppliers, cyber attacks, air cargo constraints and increased multi-modal. “Hanging over all...
INDUSTRY・3 DAYS AGO
Sourcing Journal

The ongoing pandemic is making it difficult for shoe sellers to figure out what U.S. shoppers want. This content is for Limited, SJ Promo- 40% off, Annual, SJ Promo 50% off, $2/ Week, $3 / Week, SJ Promo- 25% off and $15 a Month members only. You can read up to five free articles each month with a Limited Level Subscription. Please visit the site and log in, or subscribe to read.
RETAIL・5 DAYS AGO
Sourcing Journal

The rising costs that spurred many U.S. apparel and footwear brands to hike prices are forcing Japan’s fast-fashion giant do the same. This content is for Limited, SJ Promo- 40% off, Annual, SJ Promo 50% off, $2/ Week, $3 / Week, SJ Promo- 25% off and $15 a Month members only. You can read up to five free articles each month with a Limited Level Subscription. Please visit the site and log in, or subscribe to read.
LOS ANGELES, CA・9 DAYS AGO
The Motley Fool

All three are innovators in their respective markets.
STOCKS・1 DAY AGO

The legal cannabis industry in Canada must continue to consolidate to make it an attractive space for investors.
ECONOMY・1 DAY AGO
The Motley Fool

This cloud computing company has crashed back to earth in recent months.
STOCKS・4 HOURS AGO
The Motley Fool

The e-commerce company was a prime beneficiary of the coronavirus pandemic but is stumbling out of the gate in 2022.
STOCKS・1 HOUR AGO
Footwear News

Among the many concerns for global CEOs right now, inflation is topping the list. And according to many executives, these pressures are not going away any time soon. Inflation was the second highest business concern reported among global CEOs behind COVID-19 disruptions, according to a survey of CEOs around the world highlighted in the C-Suite Outlook 2022 report from Conference Board, a business research group. Labor shortages, supply chain disruptions, and changes in consumer behavior also ranked among the top concerns for business leaders. According to a majority of CEOs, inflationary pressures will last at least through 2022, and perhaps beyond. 31%...
BUSINESS・2 DAYS AGO

Out of stock, out of sales: Supply chain issues hurt local creatives

Twenty-five thousand dollars — that’s how much Beth Hughes, owner of local soy wax candle company, Little Light Co., said she estimates the company lost in sales in 2021. She said she believes clients sought similar products from other businesses when she couldn’t provide candles due to supply issues.
ATHENS, GA・3 DAYS AGO
Motley Fool

3 Dividend Stocks To Buy on Sale

New Residential is more able to withstand higher interest rates. SL Green Realty will benefit from a return to the office. Tanger Factory Outlet Centers is back to pre-pandemic customer traffic levels. With the stock market at elevated levels (even accounting for the recent sell-offs), finding stocks on sale is...
STOCKS・3 DAYS AGO
Footwear News

Retail sales last month bested 2020 comparisons, despite headwinds from Omicron and supply chain disruptions. Retail sales in December were $626.8 billion, marking an increase of 16.9% from December 2020. December’s numbers were down 1.9% from November 2021, which was likely a result of more people completing their holiday shopping earlier in the season to avoid stock-outs from supply chain issues. Overall, total sales throughout 2021 were up 19.3% from 2020. Sales between October 2021 and December 2021 were up 17.1% compared to the same period in 2020. December gasoline sales were up 41% year over year and food services and drinking...
BUSINESS・9 DAYS AGO
Sourcing Journal

Is December’s Sales Slowdown Cause for Panic?

Experts weigh in on what to make of the Census Bureau’s December retail sales report. This content is for Limited, SJ Promo- 40% off, Annual, SJ Promo 50% off, $2/ Week, $3 / Week, SJ Promo- 25% off and $15 a Month members only. You can read up to five free articles each month with a Limited Level Subscription. Please visit the site and log in, or subscribe to read.
LOS ANGELES, CA・9 DAYS AGO
FOXBusiness

U.S. retail sales unexpectedly declined in December, suggesting that consumers are pulling back on spending as they face surging prices and an acceleration in COVID-19 infections. The value of total sales decreased 1.9% from the prior month, the Commerce Department said Friday, marking the steepest drop in 10 months. Economists...
BUSINESS・10 DAYS AGO
CNBC

Retail sales declined 1.9% in December, much worse than the forecast for a 0.1% drop. Weak online sales were responsible for much of the slide along with a fall in spending at bars and restaurants. Import prices declined on the month, the first decrease since August. Retail sales fell much...
BUSINESS・10 DAYS AGO
Fortune

Never miss a story: Follow your favorite topics and authors to get a personalized email with the journalism that matters most to you. For all the talk of product shortages, the fading of Cyber Monday and the return of in-store shopping, U.S. online sales hit a new record in the recently concluded holiday season.
BUSINESS・11 DAYS AGO
TheStreet

No More Cyber Monday? Discount Days May Be Over, New Data Says

The days of lining up outside Best Buy (BBY) - Get Best Buy Co., Inc. Report or waiting for the clock to hit 12:01 a.m. for an online Sephora (LVMH) sale may finally be coming to an end. The final 2021 Adobe Analytics (ADBE) - Get Adobe Inc. Report holiday...
RETAIL・11 DAYS AGO
FXStreet.com

On Friday, the US retail sales report for December will be released. Analyst at Wells Fargo expected a rise of just 0.2%, which would be the slowest pace in four months. “Consumers are feeling the pressure from inflation. Retail sales came in well-below expectations in November, rising just 0.3% over the month. Higher prices for necessities, such as food and gas, have forced hard choices in more discretionary categories, such as electronics & appliances and department stores during the holiday shopping season. However, we suspect at least some consumers' holiday shopping was pulled forward, heeding advice from well-publicized supply chain issues and aggressive messaging from retailers.”
BUSINESS・12 DAYS AGO
Pasadena Star-News

Irvine-based Rivian Automotive chief operating officer stepped down, extending a tumultuous stretch for the electric-vehicle maker. Rod Copes, who had held the title since March 2020, left last month, according to his LinkedIn profile. The company said in a statement that he “began a phased retirement from Rivian several months...
IRVINE, CA・12 DAYS AGO