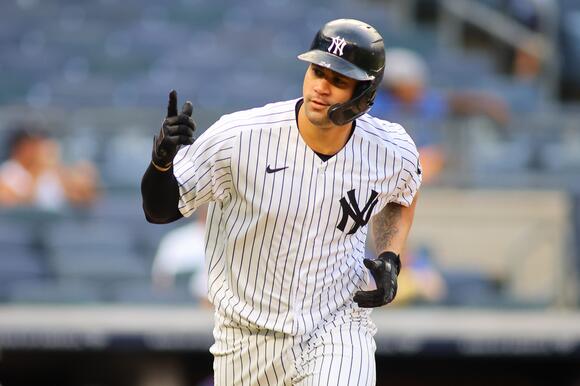 The Yankees have until 8 p.m. Tuesday night to make a decision on Gary Sanchez, and if New York decides to let the polarizing catcher go, a nearby rival could be waiting to scoop him up.

According to Mike Puma of the New York Post, the Mets have “at least discussed” the Sanchez situation in the Bronx, as the Yanks must decide whether to tender the soon-to-be 29-year-old a contract, trade him, or release him.

Sanchez now has a Mets tie with the hiring of GM Billy Eppler, who knows Sanchez from his time in the Yankee organization, when Sanchez was a highly-touted prospect.

The Mets have a catcher in James McCann, who signed a four-year, $40.6 million deal last offseason, but hit just .232 with a .349 slugging percentage and 10 home runs. The current backup is Tomas Nido, who is entering his first year of arbitration eligibility.

If the Yankees bring back Sanchez, which will likely be the outcome given the slim options for catchers on the trade and free agent market, he would stand to make roughly $8 million. He was tendered a deal last offseason after the front office reportedly mulled moving on following a disastrous 2020 campaign which saw Sanchez lose his starting role to backup Kyle Higashioka. Sanchez improved in 2021, but still is far from the hitter he was when he stormed onto the scene in a historic rookie season in 2016, and from the All-Star he was as recently as 2019. Sanchez batted .204 with a .730 OPS and 23 home runs last season.

A polarizing figure throughout his career, A-Rod ranks fourth on the all-time home run list, but was suspended for violating MLB's drug policy.
MLB・1 DAY AGO
USA TODAY

Three weeks from when pitchers and catchers usually report and no one knows when spring training will start or if it will be a truncated schedule.
MLB・20 HOURS AGO
Inside The Dodgers

LA's lefty reliever is pitching to high schoolers to keep his arm loose and ready for the 2022 season amid the MLB lockout.
MLB・2 DAYS AGO

One of the first black superstars in Philadelphia Phillies history, today we remember the legendary career of Dick Allen.
MLB・2 DAYS AGO
Inside The Phillies

Inside the Phillies fielded mailbag questions while the MLB lockout is in full force.
MLB・2 DAYS AGO
Audacy

We asked our writers to advocate for one player on this year’s ballot to get elected to Cooperstown.
MLB・2 DAYS AGO

The Cincinnati Reds are a part of MLB history, widely recognized as one of the most storied franchises in baseball.
NFL・2 DAYS AGO
USA TODAY

USA TODAY Sports broke down the 12 most intriguing cases on the ballot, with all you need to know heading into Tuesday’s momentous announcement.
MLB・1 DAY AGO
Audacy

What If Ryan Howard Never Tore His Achilles?

The Phillies lose game 5 of the 2011 NLDS to the Cardinals, as many Phillies fans would like to forget. But what would happen if Ryan Howard didn't tear his Achilles on that play, how would the future have looked different?
MLB・1 DAY AGO
Inside The Dodgers

Justin Turner began the 2021 season batting .305 with 29 homers, 50 RBI, and a 1.088 OPS over 84 games. Then he was selected to play in the All-Star Game for the second time, and it appeared as if the Dodgers made a brilliant move in signing him to a 2-year deal with a team option in the previous ...
MLB・1 DAY AGO
Sports Illustrated

This is the last Five-Tool Newsletter before the results of the BBWAA Hall of Fame election are announced, so I’ll be revealing my hypothetical ballot today. Sure, it has no bearing on the actual process, but it’s fun. And as the lockout drags on, there aren’t too many better things to talk about. ...
NFL・2 DAYS AGO
Inside The Phillies

After a disappointing 2021 campaign, what are the Phillies' options with Didi Gregorius?
MLB・1 DAY AGO

Jean Segura doesn't put up flashy numbers or make dazzling defensive plays, but all together he is one of the most well-rounded players in the National League.
MLB・16 HOURS AGO
Inside The Dodgers

The MLB and MLBPA are set to meet on Monday to continue CBA negotiations.
MLB・19 HOURS AGO
Inside The Royals

The Kansas City Royals drafted pitcher Ben Hernandez fresh out of high school in 2020, but he could display quite a bit of maturity and growth just two years later.
MLB・1 DAY AGO
Inside The Phillies

A new change will be implemented in the upcoming minor league season.
MLB・1 DAY AGO