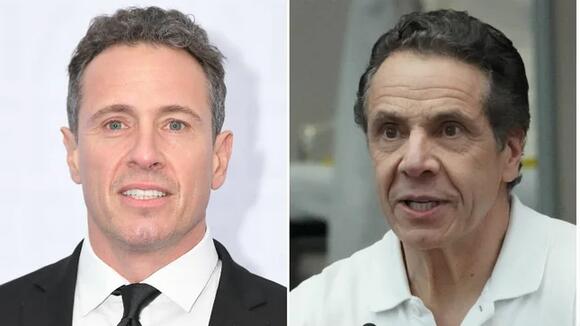 CNN says it will conduct a "thorough review" of documents showing the role prime-time anchor Chris Cuomo played in advising his brother Andrew Cuomo , the former governor of New York, as the Democrat defended himself from accusations of sexual misconduct.

News of the internal review came hours after the New York attorney general's office released additional documents regarding its investigation of the former governor, who resigned under pressure in August after the state Attorney General Letitia James (D) detailed allegations against him from nearly a dozen women.

CNN said in a statement issued on Monday that "the thousands of pages of additional transcripts and exhibits that were released today by the NY Attorney General deserve a thorough review and consideration."

"We will be having conversations and seeking additional clarity about their significance as they relate to CNN over the next several days," the network said.

Included in the documents released Monday are transcripts of interviews with investigators and the content of text messages sent between the anchor and his brother's top aides, who were scrambling to defend the governor after 11 women came forward saying he had sexually harassed them.

In one text message exchange in March, Melissa DeRosa, one of the former governor's closest confidants, asking Chris Cuomo to "check with his sources" in the news media about additional women coming forward against the governor.

"On it," Cuomo replied, the documents show.

In another text message, Cuomo asked DeRosa to "please let me help" with prepping the governor's response to the allegations.

After news reports revealed Cuomo — who hosts a prime-time show on one of the nation's leading cable news networks — had participated in crisis public relations sessions with the governor's team, the anchor apologized, telling viewers it was a mistake to do so.

"I never misled anyone about the information I was delivering or not delivering on this program. I never attacked nor encouraged anyone to attack any woman who came forward. I never made calls to the press about my brother’s situation. I never influenced or attempted to control CNN’s coverage of my family," Cuomo said in August. "And as you know, back in May when I was told to no longer communicate with my brother’s aides in any group meetings, I acknowledged it was a mistake, I apologized to my colleagues, I stopped, and I meant it."

When news of the anchor's involvement in his brother's public relations efforts was first reported, CNN President Jeff Zucker said Cuomo “made a mistake” but declined to suspend him.

Cuomo did not acknowledge the newly released transcripts or text messages during his program on Monday after saying during his on-air statement in August those remarks would be his "final word on it."

CNN anchor Jim Acosta is the perfect choice — among many excellent choices — to take over the primetime time slot that was suddenly vacated by Chris Cuomo last month — even though it seems like it was years ago. There are many worthy candidates, both within...
TV & VIDEOS・12 HOURS AGO
Variety

Let’s get after it: Even as CNN puts much of its energy into launching a new streaming-video hub, it’s also trying to figure out how to replace Chris Cuomo in its pivotal 9 p.m. time slot. Some staffers at the WarnerMedia network believe CNN has been holding the equivalent of on-air tryouts in recent weeks, turning over the 9 p.m. hour to hosts like Michael Smerconish, Laura Coates and Brianna Keilar. Jim Acosta, the former White House reporter turned weekend anchor, takes a turn this week. Both he and Keilar have held forth under the program banner, “Democracy in Peril,” a...
TV & VIDEOS・2 DAYS AGO
mediaite.com

Ousted CNN anchor Chris Cuomo got a nod of support from fashion designer Kenneth Cole, his brother-in-law, on Friday. Cuomo was fired by the network in December, following an internal investigation of his actions to help his brother, former New York Gov. Andrew Cuomo (D), overcome allegations of sexual misconduct. CNN said the review revealed “additional information;” the New York Times reported the network was informed of an allegation of sexual assault by the anchor unrelated to the Cuomo brother inquiry.
BEAUTY & FASHION・5 DAYS AGO
Fox News

New York's attorney general released damning video on Thursday of former CNN star Chris Cuomo’s testimony that resulted in his termination from the liberal network. Cuomo’s infamous interview with investigators proved he was active in seeking information about the women who were coming forward with sexual misconduct allegations against his older brother, ousted Democratic Gov. Andrew Cuomo.
ENTERTAINMENT・7 DAYS AGO

Chris Cuomo said he advised actor Alec Baldwin not to publicly speak out about cancel culture while the journalist's brother, Andrew Cuomo, was facing a sexual misconduct trial. Beginning in late 2020, a scandal broke out for Andrew Cuomo, then the governor of New York, when he was accused of...
CELEBRITIES・7 DAYS AGO
WRGB

Albany, NY (WRGB) — While the video of Chris Cuomo's testimony was just released Thursday, January 20th, his involvement in trying to mitigate his brother's fall from grace has already cost him dearly. The news broadcaster was fired by CNN in December when a transcript of his statements was...
POLITICS・7 DAYS AGO
ABCNY

CNN's ratings have dropped significantly since being hit with multiple headline making scandals. According to the New York Post, the cable news network had reported only 548,000 viewers during the week of Jan. 3, 2022. This is a vast difference from the nearly 2.7 million viewers CNN ranked in on the same week a year prior.
TV & VIDEOS・14 DAYS AGO

‘With enough popular momentum, politicians and offices will change their positioning based on constituent demands. It is contemptible to call these feedback loops a mob or a witch hunt. On the contrary, they are demonstrations of democracy at work.’. Last week, an Albany court judge announced that criminal charges against...
POLITICS・14 DAYS AGO
mediaite.com

Is Wolf Blitzer’s New Show on CNN+ More Evidence the Network is Pushing Him Out?

CNN announced on Wednesday that veteran anchor Wolf Blitzer will host a new show, The Newscast, for WarnerMedia’s upcoming streaming service CNN+. The move is just the latest in a string of hiring announcements for the streaming platform, but perhaps one of the most notable as it may also signal bigger changes ahead for CNN – which is currently facing serious ratings woes.
TV & VIDEOS・8 DAYS AGO
spectrumlocalnews.com

The campaign account of former Gov. Andrew Cuomo spent at least $1.9 million on attorneys in the last six months, records made public on Tuesday evening show. Cuomo, who left office on Aug. 24, has faced a thicket of legal issues and investigations, most recently having a misdemeanor forcible touching charge dismissed in Albany County.
ALBANY COUNTY, NY・9 DAYS AGO
The Independent

One of the Republican Party’s most controversial top-tier Senate candidates has reported spectacular fundraising returns, further raising his profile even as some worry he could hurt the party’s chances of retaking the upper chamber.Herschel Walker, who is challenging freshman Georgia Senator Raphael Warnock, pulled in some $5.4m in donations over the last quarter of 2021, a sum that vaults him to the very top ranking of Senate fundraisers this cycle.A former NFL player, Mr Walker was endorsed by Donald Trump last October, and since then has attracted the support of many other top Republicans, including Mitch McConnell and other...
PRESIDENTIAL ELECTION・1 DAY AGO

Cohosts of The Five discussed Stephen Breyer’s looming retirement and potential replacements President Joe Biden could nominate. On the campaign trail, Biden pledged to nominate the first Black woman to the Supreme Court if elected. He now has that opportunity. Cohost Geraldo Rivera had an interesting take on the...
PRESIDENTIAL ELECTION・1 DAY AGO
Fox News

While criticizing the confirmation of Dr. Joseph Ladapo as Florida's next Surgeon General, CNN’s Anderson Cooper admitted that Ladapo is correct when it comes to the long-term efficacy of COVID-19 vaccines. During Wednesday’s confirmation hearing, Ladapo was grilled repeatedly on the effectiveness of COVID-19 vaccines by State Senator Lauren...
FLORIDA STATE・9 HOURS AGO
USA TODAY

United States needs Defending Ukraine Sovereignty Act. Triggered measures must be put in place to signal the concrete costs before a Russian invasion.
MILITARY・1 DAY AGO
The Independent

The news that Stephen Breyer, one of the three remaining liberals on the Supreme Court, is expected to retire soon has set off fevered speculation about who will replace him. On Wednesday, a pair of Fox News hosts had an unlikely suggestion: vice-president Kamala Harris.President Biden pledged to nominate the first Black woman to the Supreme Court during his 2020 campaign, and the vice-president has reportedly been unhappy with her role in the administration thus far.“This person has to be a woman. She’s got to be Black, and she’s got to be younger. Anybody thinking what I’m thinking?” said...
CONGRESS & COURTS・1 DAY AGO
The Independent

The popular Reddit forum r/antiwork, which focuses on ways to reform exploitative labour systems and in which users commiserate over pandemic working conditions, has removed a moderator following a contentious Fox News interview.Moderator “Abolishwork”, real name Doreen Ford, appeared on Jesse Watters’ show on Fox News earlier this week.In the aftermath of the testy exchange in which the host was openly contemptuous about the movement, the forum went private.A statement from the forum posted on Reddit on Thursday reads: “Regarding Abolishwork, we are planning to remove her from her moderation duties and have contacted the admins for the removal...
REDDIT・18 HOURS AGO
The Independent

Marjorie Taylor Greene was left smiling awkwardly as a TV talk show caller said she was “an embarrassment to the state of Georgia”.The right-wing congresswoman was taking part in a call-in episode of the Night Talk show on local cable TV in her home state.“I just want to say thank God for Joe Biden,” the female caller said, causing Ms Green to turn and look at the hosts.But the caller was not done and added, “she is an embarrassment to the state of Georgia”.The criticism caused the Republican to tilt her head and purse her lips and force a smile...
ENTERTAINMENT・1 DAY AGO
People

Meghan McCain and Her Husband 'Got Very Sick' with COVID, She Reveals: 'Hard for Me to Shake'

Meghan McCain is on the mend — albeit slowly — after a stressful bout with COVID-19 that left her feeling "sad and pessimistic" and frustrated with the country's public health strategy, she said Wednesday. The former View co-host and conservative commentator revealed her diagnosis in a piece for...
PUBLIC HEALTH・1 DAY AGO
The Guardian