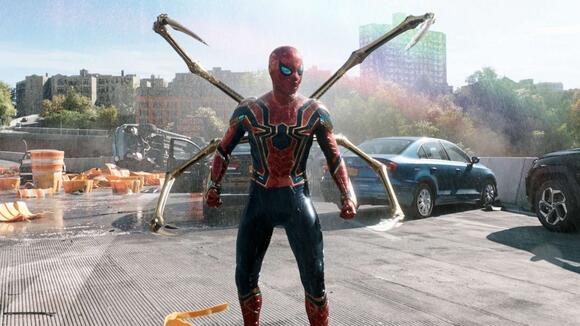 For fans of Tom Holland's Spider-Man who were worried by recent comments he made to GQ about envisioning a life "without the lycra," rest easy.

Amy Pascal, who has produced all three of Holland's Spidey movies -- as well as the "Venom" movies and 2018's "Spider-Man: Into the Spider-Verse" -- said Holland is here to stay. And in lycra, no less.

"This is not the last movie that we are going to make with Marvel [Studios]," she told Fandango of "Spider-Man: Far From Home," which swings into theaters on Dec. 17.

"We are getting ready to make the next Spider-Man movie with Tom Holland and Marvel," she continued. "We're thinking of this as three films, and now we're going to go onto the next three. This is not the last of our MCU movies."

Holland first debuted as Peter Parker in 2016's "Captain America: Civil War" before getting a solo film with 2017's "Spider-Man: Homecoming." After back-to-back appearances in 2018's "Avengers: Infinity War" and 2019's "Avengers: Endgame," he got a second solo movie with 2019's "Spider-Man: Far From Home."

The 25-year-old actor will get to star in a major film without a lycra suit when he plays Nathan Drake in the movie adaptation of the popular video game franchise "Uncharted."

Disney’s slate of live-action remakes has included “Cinderella,” “The Jungle Book” and “Beauty and the Beast,” and coming soon is Marb Webb’s live-action reimagining of “Snow White and the Seven Dwarfs.” Webb, best known for helming “500 Days of Summer” and Andrew Garfield’s “Spider-Man” films, has cast “West Side Story” breakout Rachel Zegler in the title role and Gal Gadot as the villainous Evil Queen. Not everyone is too thrilled with idea of remaking “Snow White,” most notably Peter Dinklage. The Emmy winner guested on Marc Maron’s “WTF” podcast this week and criticized remaking “Snow White” due to the fairytale’s...
MOVIES・1 DAY AGO
GMA

The news comes as the original film is set to turn five this summer.
MOVIES・4 DAYS AGO
The Independent

Samuel L Jackson has reportedly stunned local diners in a Huddersfield restaurant after being spotted in the area filming a new series.The actor is believed to have arrived in Yorkshire to film the forthcoming Marvel series, Secret Invasion.Jackson, who has played Nick Fury in several films throughout the Marvel Cinematic Universe, is set to front his own Disney Plus series as the character.Local reports have confirmed multiple sightings of the Hollywood A-lister, as Secret Invasion prepares to film in Halifax and Leeds.He has reportedly been seen taking photographs with fans and dining in a local restaurant.Secret Invasion will also...
MOVIES・2 DAYS AGO
Deadline

Disney has responded to remarks made yesterday by award-winning actor Peter Dinklage that called the studio’s plans for a live-action remake of Snow White and the Seven Dwarfs “f*cking backwards.” A Disney spokesperson told Deadline, “To avoid reinforcing stereotypes from the original animated film, we are taking a different approach with these seven characters and have been consulting with members of the dwarfism community. We look forward to sharing more as the film heads into production after a lengthy development period,” . Disney, Deadline understands, has cultural consultants on all of its live-action films including previous titles Aladdin and Mulan, in addition to...
MOVIES・15 HOURS AGO

EXCLUSIVE: Ivory Aquino (When They See Us, Tales of the City) has joined the cast of Batgirl, the upcoming superhero film that Bad Boys for Life‘s Adil El Arbi and Bilall Fallah are directing for HBO Max. Aquino will star alongside previously announced cast members including Leslie Grace, J.K. Simmons, Brendan Fraser, Michael Keaton and Jacob Scipio. Batgirl is based on the DC comics created by writer Gail Simone and artist Ardian Syaf. While specifics with regard to the film’s plot are being kept under wraps, it will center on Gotham City police commissioner Jim Gordon’s (Simmons) daughter, Barbara (Grace). Aquino will play Barbara’s best friend,...
MOVIES・1 DAY AGO
Variety

Disney has issued a response over its upcoming live-action “Snow White” remake following criticisms made by Peter Dinklage. The “Game of Thrones” Emmy winner blasted the Disney remake during an interview on Marc Maron’s “WTF” podcast, calling out the fairytale’s “fucking backwards” depictions of dwarfs. “To avoid reinforcing stereotypes from the original animated film, we are taking a different approach with these seven characters and have been consulting with members of the dwarfism community,” a spokesperson for Disney said in a statement to Variety. “We look forward to sharing more as the film heads into production after a lengthy development period.” The...
MOVIES・15 HOURS AGO
The Hollywood Reporter

Sony Pictures has nabbed the worldwide rights to Rosalind Ross’ feature directorial debut, Father Stu, starring and produced by Mark Wahlberg. Mel Gibson, Jacki Weaver and Teresa Ruiz also star in the redemptive biopic about boxer-turned-priest Father Stuart Long now set to hit U.S. theaters on Good Friday, April 15. “Father’s Stu’s journey from troublemaker to clergyman was inspiring to many, including me. Rosey has done an incredible job capturing the essence of who he was and how he affected the people he met. I hope that with this film, we keep his spirit alive and continue his good works,” Wahlberg said...
MOVIES・17 HOURS AGO
hypebeast.com

As the world waits for Raf Simons and to release the just-debuted Prada Fall/Winter 2022 collection, the luxury fashion house continues to cause a stir with its latest campaign which stars none other than Spider-Man: No Way Home‘s Tom Holland. You may think celebrity endorsement as big as this...
DESIGNERS & COLLECTIONS・9 DAYS AGO

Andrew Garfield’s next role? Professional party planner, or so we can only hope. During an interview on “The Ellen DeGeneres Show,” Garfield likened keeping his “Spider-Man: No Way Home” role under wraps to planning the ultimate “surprise birthday party” for Marvel fans. “It was fun to keep it secret, because you know when you’re planning a surprise birthday party for someone and they’re like, ‘I hate surprises. Tell me, is the party happening? No seriously, don’t mess around because you know I actually hate surprises,'” Garfield joked. “So it felt like I was part of organizing a surprise birthday party for a...
MOVIES・1 DAY AGO
Deadline

EXCLUSIVE: Chris Evans (Avengers franchise, Defending Jacob) is set to star opposite Dwayne Johnson in an upcoming holiday event film from Amazon Studios. The film, which is currently titled Red One, aims to shoot this year. It is a globe-trotting, four-quadrant action-adventure comedy imagining a whole new universe to explore within the holiday genre. Plot specifics are under wraps. The project stems from an original story by Seven Bucks Productions’ President of Production Hiram Garcia that Amazon Studios landed after a competitive bidding war last year. Jake Kasdan (Jumanji franchise) is directing from a screenplay by Seven Bucks Productions’ frequent collaborator Chris...
MOVIES・1 DAY AGO
AFP

"Spider-Man: No Way Home" powered its way into sixth place on the all-time global box office list, as it returned to the top spot in North American theaters at the weekend, industry data showed Sunday. In its sixth week out, the Sony superhero yarn with Tom Holland in the title role took in an estimated $14.1 million in the United States and Canada after slipping briefly from the top rung last weekend, industry watcher Exhibitor Relations reported. Globally, its expected $1.69 billion total would push it past blockbusters "Jurassic World" ($1.67 billion) and "The Lion King" ($1.66 billion) into sixth place on the all-time list, according to Box Office Mojo, a division of the Internet Movie Database (IMDb). The achievement is all the more notable given that it came during the coronavirus pandemic, when theatergoers have been skeptical about returning to auditoriums amid an Omicron-fueled surge in the number of cases.
MOVIES・2 DAYS AGO
Variety

Bradley Cooper (“Nightmare Alley,” “Licorice Pizza”) and Mahershala Ali (“Swan Song”) sat down for a virtual chat for Variety’s Actors on Actors, presented by Amazon Studios. For more, click here. This season, both Bradley Cooper and Mahershala Ali are pulling off a double act. Cooper’s fans can see him in two period pieces: As the lead of “Nightmare Alley,” in which he plays a tormented mentalist desperate for validation in the 1940s traveling-carnival scene, and as a key supporting player in “Licorice Pizza,” in which he’s a deranged version of the producer Jon Peters. Ali’s double duty is more forward-looking, and...
MOVIES・19 HOURS AGO

One of Hollywood's cutest couples is going strong.
CELEBRITIES・19 HOURS AGO
thedigitalfix.com

Seabiscuit star passes away at 24

The star of the Oscar-nominated drama movie Seabiscuit has passed away, aged 24. Popcorn Deelites had a moderate racing career before achieving Hollywood fame. He had been enjoying a long retirement at Old Friends Farm since 2005 with his father – with the even better name of Afternoon Deelites.
CELEBRITIES・1 DAY AGO
Insider

In a behind-the-scenes featurette, Holland said that the sequence from "Uncharted" was "really scary," but that the fear made it better.
MOVIES・1 DAY AGO
GeekTyrant

Fans had a blast at the movies this past month watching Spider-Man: No Way Home and seeing the three Spider-Man meme come to life. The film was a heavy and important chapter in the Tom Holland story arc, and it was cathartic to see our first Spider-Man, Tobey Maguire, as well as “middle child,” Andrew Garfield, back up in the roles of Peter Parker. We had already seen these two characters face immense loss and pain, and knew that Holland’s Parker could count on them as unique guides through his trauma.
MOVIES・7 DAYS AGO
GAMINGbible

Spoilers for Spider-Man: No Way Home contained in this article. I've warned you! Don't say I haven't. One of the best things about Spider-Man: No Way Home was finally getting to see multiple live-action Spider-Men play off one another. For the first time ever, Tom Holland's MCU Spidey was joined...
MOVIES・13 DAYS AGO
GamesRadar+

Tom Holland has talked about Peter Parker's journey in the MCU, from Spider-Man: Homecoming up to Spider-Man: No Way Home. No Way Home closed the MCU trilogy of Spidey movies – though there may be more on the way – and (spoiler alert) erased the entire world's memory of Peter, leaving the character to strike out on his own.
MOVIES・13 DAYS AGO
Cinema Blend

One Thing Tom Holland’s Upcoming Spider-Man Movies Definitely Don’t Want To Do, According To Amy Pascal

Spider-Man: No Way Home’s global success was a big win for Sony and Marvel Studios as well as fans, who were treated to one of the strongest entries in the franchise to date. Now as Amy Pascal, Kevin Feige, Tom Holland and the rest of the Spidey team look to the future, they’re not only planning what they’re going to do in the upcoming films, but also what not to do in order to create a successful follow up.
MOVIES・1 DAY AGO