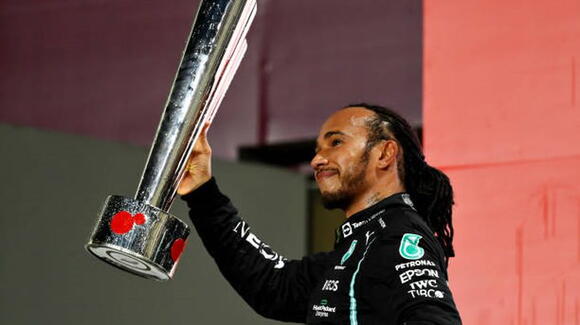 Kimi Raikkonen has said Lewis Hamilton and Max Verstappen ’s rivalry has been unnecessarily turned into a “big story”.

The Briton and the Dutchman have clashed on the track more than once this season, but 2007 world champion Raikkonen has said the pair’s rivalry is nothing unusual for a title race.

“For me, it doesn’t matter. Whoever has the most points at the end of the last race [wins].

“Honestly I think everyone that gets close is always going to be in a lot of tight battles, and one will be upset one day and the next another day.

“But I think a lot has been written about it and making a big story out of not so many things in my view, but that is I guess F1 or the media.

“A lot has been written on something that’s made much worse than it actually is.”

Seven-time champion Hamilton is seeking to go one clear of joint-record-holder Michael Schumacher on eight titles.

Lewis Hamilton’s Formula One future should not be taken for granted, Zak Brown has insisted – with the McLaren boss admitting he would not be surprised if the seven-time world champion sensationally quits.More than a month on from the controversial conclusion to the Abu Dhabi Grand Prix which denied Hamilton a record eighth title, the Mercedes driver is said to be debating whether to return to the grid in 2022.Hamilton has been conspicuous by his absence from social media in the weeks since the debacle in the desert.An FIA inquiry was launched last week, but the governing body’s findings...
MOTORSPORTS・1 DAY AGO
Insider

Hamilton's usually active social media feeds have been dormant since December 11, and he has not been seen out in public since last season's finale.
MOTORSPORTS・1 DAY AGO
The Independent

Toto Wolff does not think that Lewis Hamilton will ever “get over” the controversial ending to the 2021 Formula 1 season.Hamilton was denied a record-breaking seventh world title after Max Verstappen passed him on the final lap of the season’s final race in Abu Dhabi. Verstappen had been afforded the opportunity to line up an overtake after the intervention of race director Michael Masi, who permitted lapped cars between the title rivals to un-lap themselves, clearing a path for the Red Bull driver to snatch his first Drivers’ Championship.Revealing that he and his team had been left “disillusioned” with...
MOTORSPORTS・1 DAY AGO

The Formula 1 off season rumbles on with the aftermath of Abu Dhabi still an intense topic in F1 circles, not to mention the link between that and Lewis Hamilton’s future. The seven-time world champion appears to be switching off after the bitter ending to the 2021 season as Max Verstappen stole a maiden world title following a thrilling final lap.But there is also much to debate and discuss surrounding both new rules for the upcoming season, as well as uncertainty surrounding who will line up on the grid.Another trend is how Mercedes, Toto Wolff and the FIA mend...
MOTORSPORTS・2 DAYS AGO
firstsportz.com

Mercedes Team Principal Toto Wolff has recently emphasized the characteristic that according to him separates Lewis Hamilton and Max Verstappen. Lewis lost out on his record eighth world title during the Abu Dhabi Grand Prix of the 2021 Formula1 season. It has been stated in automotorsport that Toto Wolff during...
MOTORSPORTS・11 HOURS AGO
firstsportz.com

Roman Grosjean the former Hass Formula1 driver has recently given his opinion on the drama of the Abu Dhabi Grand Prix of the 2021 Formula1 season. It has been stated in Essentiallysports that as per Roman Grosjean, Max Verstappen deserved to win the 2021 Formula1 title given what transpired throughout the season.
MOTORSPORTS・2 DAYS AGO
racingnews365.com

Sports stars and clubs across the world continue to provide an insight into their lives on social media.Here, the PA news agency looks at some of the best examples from January 19.TennisAndy Murray served Naomi Osaka a compliment. And she returned it.Anyone put their heart on their sleeve and fight harder than @andy_murray ? 🥺🙏🏾🔥 https://t.co/c6G2SA2Ycx— NaomiOsaka大坂なおみ (@naomiosaka) January 19, 2022Osaka was feeling arty.Lol omg 😂💀 https://t.co/SeYxBn0avu— NaomiOsaka大坂なおみ (@naomiosaka) January 19, 2022Serena had a battle on her hands.[xdelx]Denis Shapovalov struggled with a banana!Sometimes the struggle is real 😅 Sorry, @denis_shapo 🍌#AusOpen • #AO2022• #AOTennis pic.twitter.com/NYtCJkQYss— #AusOpen (@AustralianOpen) January 19, 2022Madison...
TENNIS・1 DAY AGO
The Independent

It was hard to know where to look at times on a day four of the Australian Open that seemed to have it all. It ended with both Emma Raducanu and Andy Murray bowing out at the second round stage, with one showing admirable fight and spirit to rage against an early exit and the other questioning whether they still had enough to go on. While Raducanu’s first grand slam since her remarkable US Open triumph is over earlier than many would have expected, it does not tell the full story of a wild evening in Melbourne in which she...
TENNIS・9 HOURS AGO

Andy Murray’s Australian Open came to a disappointing end with a second-round defeat to world number 120 Taro Daniel – the lowest-ranked opponent to beat him at a grand slam.Hopes were high that Murray could have another strong run in Melbourne when he ground out a five-set win over Nikoloz Basilashvili in round one, three years after it appeared his career had ended on the same court.But, back on John Cain Arena, the feeling was very different this time as Murray struggled for sharpness against a tenacious and mobile opponent and fell to a 6-4 6-4 6-4 defeat.Andy Murray's #AusOpen...
TENNIS・14 HOURS AGO
The Independent

Andy Murray relishes the sort of five-set epic that carried him into the second round of the Australian Open but he would happily take a boring three-setter against Taro Daniel on Thursday.Murray marked his return to Melbourne Park in typically-dramatic fashion by defeating Nikoloz Basilashvili in close to four hours – the third tight match he has had against the Georgian in six months.But it is not just Basilashvili that Murray finds a difficult opponent to put away and the Scot has spent a lot of time thinking about the best way to try to be more efficient on...
TENNIS・1 DAY AGO
The Independent

Top-tier motorsport and positive climate action are not concepts the general population often associates with one another. After all, how can sending out a field of high-speed cars to race around a track for a couple of hours a few times per month be anything other than a colossal contributor to environmental decline and global temperature rises?Motorsport is about speed and glory, of course, but the manufacturers who enter racing championships such as Formula One do so primarily for another reason – to use the resources, competition, and talent in motorsport to develop technologies which can be applied to road...
MOTORSPORTS・14 HOURS AGO
The Independent

Andy Murray casts doubt on returning to Australian Open: ‘Not if I do what I did tonight’

Andy Murray hinted this could be his final Australian Open unless he proves to himself that he can compete at the highest level this season.Murray fell to a disappointing straight-sets defeat against Japanese qualifier Taro Daniel in the second round at Melbourne Park on Thursday, and the Scot cut a dejected figure in his post-match press conference. The 34-year-old overcame career-threatening injury over the past three years to make his first appearance at the Australian Open since 2019, back when he left the tournament in tears announcing he was likely to retire. But he suggested he will only return to...
TENNIS・11 HOURS AGO