Yellen: Not Raising Debt Ceiling Could ‘Eviscerate Our Current Recovery’ During Economic Update 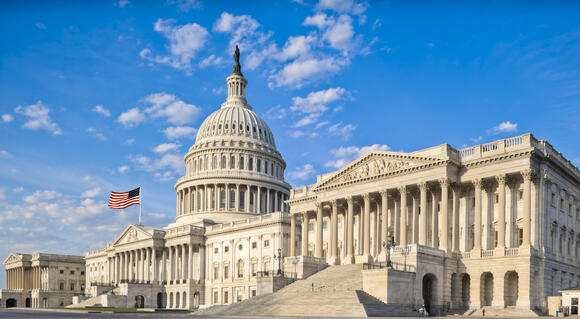 Treasury Secretary Janet Yellen testified before Congress Monday, Nov. 29, telling the Committee on Banking, Housing, and Urban Affairs that not resolving the debt ceiling issue in time “will eviscerate our current recovery .”

As consequential as November was, December promises to be more so, as there are two decisions facing Congress that could send our economy in very different directions, Yellen wrote in prepared remarks.

The first is the debt limit.

“I cannot overstate how critical it is that Congress address this issue. America must pay its bills on time and in full. If we do not, we will eviscerate our current recovery. In a matter of days, the majority of Americans would suffer financial pain as critical payments, like Social Security checks and military paychecks, would not reach their bank accounts, and that would likely be followed by a deep recession,” she wrote.

The second issue involves the Build Back Better legislation, she wrote, adding that she applauds the House for passing the bill and is hopeful that the Senate will soon follow.

“Build Back Better is the right economic decision for many reasons. It will, for example, end the childcare crisis in this country, letting parents return to work. These investments, we expect, will lead to a GDP increase over the long-term without increasing the national debt or deficit by a dollar. In fact, the offsets in these bills mean they actually reduce annual deficits over time.”

Yellen also noted in her remarks that the progress of the economic recovery can’t be separated from the progress against the pandemic.

“I know that we’re all following the news about the Omicron variant,” she wrote. “As the President said yesterday, we’re still waiting for more data, but what remains true is that our best protection against the virus is the vaccine. People should get vaccinated and boosted.”

Last month, Yellen Yrevised her Oct. 18 debt ceiling estimate, saying that the U.S. will reach its debt ceiling on Dec. 15, giving Congress two additional weeks to come to an agreement.

“In my October 18 letter to you, I noted that the recent $480 billion increase in the debt limit provided a high degree of confidence that Treasury would be able to finance the U.S. government through Dec. 3, 2021. Based on our most recent information, I am now able to further refine that projection,” Yellen wrote in the letter.

Her revised timeline stemmed from President Joe Biden’s signing the Infrastructure Investment and Jobs Act , “which appropriates $118 billion for the Highway Trust Fund.”

This article originally appeared on GOBankingRates.com : Yellen: Not Raising Debt Ceiling Could ‘Eviscerate Our Current Recovery’ During Economic Update

This year, most Americans will receive little or no extra help from the government for the first time since 2019. As the country confronts its first year without stimulus since the start of the...
ECONOMY・1 DAY AGO
GOBankingRates

The Federal Reserve Board released its long-awaited discussion paper about the pros and cons of a potential U.S. central bank digital currency (CBDC) on Jan. 20, inviting comment from the public. A...
ECONOMY・1 DAY AGO
GOBankingRates

If President Joe Biden wants to save his troubled Build Back Better plan, he'll likely need to pare it down to gain favor with Congressional moderates. Among the programs that could be on the chopping...
POTUS・1 DAY AGO
Reuters

Jan 21 (Reuters) - Several U.S. House members from President Joe Biden's Democratic Party are threatening to block a renewed push for his Build Back Better spending bill if it does not include the expansion of a federal deduction for taxes paid to states and local entities. Expanding the deduction,...
INCOME TAX・1 DAY AGO

President Joe Biden on Friday will deliver an address to mayors from cities across the country via a satellite feed from the White House.
U.S. POLITICS・1 DAY AGO
AFP

The Federal Reserve has its inflation-fighting weapons ready to fire, and when the US central bank's policy committee convenes this coming week, the focus will not be on whether they will pull the trigger but rather how many times. The policy-setting Federal Open Market Committee (FOMC), which opens its two-day meeting on Tuesday, is widely expected to begin hiking interest rates in March, though a few economists note the possibility of early action.
BUSINESS・11 HOURS AGO
Reuters

An official US digital currency could offer potential benefits to American consumers and businesses, but it is not clear they would outweigh the potential risks, the Federal Reserve said Thursday. "We look forward to engaging with the public, elected representatives and a broad range of stakeholders as we examine the positives and negatives of a central bank digital currency in the United States," Federal Reserve Chair Jerome Powell said in a statement.
U.S. POLITICS・2 DAYS AGO

Treasury Secretary Janet Yellen declared on Wednesday that the American Rescue Plan (ARP) prevented widespread economic damage in the United States. “In some ways, the ARP acted like a vaccine for the American economy, protecting our recovery from the possibility of new variants,” Newsweek reported. Yellen made the statement...
BUSINESS・2 DAYS AGO
San Diego Union-Tribune

Omicron will pinch, not derail US economic growth: Yellen

The latest coronavirus variant will weigh on US economic growth in the months ahead but will not derail it, Treasury Secretary Janet Yellen assured the nation's mayors Wednesday as they gathered in Washington. "Yes, Omicron has presented a challenge and will likely impact some of the data in the coming months, but I am confident it will not derail what has been one of the strongest periods of economic growth in a century," Yellen said. "None of this was guaranteed. I think it's important we recognize that," she added in her appearance before the US Conference of Mayors. "There's a very real counterfactual where Omicron did derail our recovery; a scenario where the new variant hurdled our economy backwards towards its state on Inauguration Day 2021" when Joe Biden assumed the presidency.
WASHINGTON STATE・3 DAYS AGO
New Haven Register

In a perfect world, U.S. government debt would be lower than it is today. Historically, when countries reach the debt levels that we are at today, they are often plagued by slower-growth economies in the years that follow. According to tradingeconomics.com, the U.S. debt to GDP ratio is currently at...
CONNECTICUT STATE・8 DAYS AGO

Check When Social Security Beneficiaries Will Receive A $1,400 Payment In 2022!

Retirees all around the United States are feeling the pinch as a result of rising prices. The rise in COVID-19 cases has made things worse. After three rounds of stimulus funds, the federal government decided to end them. A new round of stimulus checks is being forced upon Congress by...
BUSINESS・16 DAYS AGO
MarketWatch

The powerful body at the Federal Reserve that controls U.S. interest rates appears ready to raise the cost of borrowing in March for the first time in four years and bring to an end an extraordinary period of economic stimulus.
BUSINESS・1 DAY AGO
foodcontessa.com

Millions of Americans Will Receive a Direct Deposit of a Stimulus Check | Check Now!

Direct payments of up to $1,400 in stimulus money will be made to eligible taxpayers who file their tax returns this year. Americans who missed out on the third stimulus payment in 2021 may be able to claim it on their taxes this year, according to a recent piece in Diario AS en.
INCOME TAX・12 DAYS AGO
GOBankingRates

Social Security is one of the programs that helped shepherd the most vulnerable Americans through the pandemic. When prices started rising in 2021, the country was reminded once again of just how...
PRESIDENTIAL ELECTION・17 HOURS AGO
foodcontessa.com

Across the United States, a $1,400 Stimulus Check Will Be Sent Out as a Major Relief.

This year, all Americans will be eligible for a $1,400 stimulus payment, and those eligible for the third wave of stimulus checks released last year who have not yet received them will get this money. Following the filing of tax returns by qualified individuals in 2021, these checks will be sent in 2022.
U.S. POLITICS・12 DAYS AGO
TIME

It took Barack Obama four years to figure it out. The 44th president was into his second term before some psychic switch seemed to click and he finally realized what had long been obvious to everyone else. Namely, that the Republican Party had zero interest in bipartisanship and, for that matter, no priority larger than demonizing him and frustrating his agenda. Not that Obama ever made a big deal out of it, but as more than one...
U.S. POLITICS・25 MINUTES AGO
Markets Insider

In September, Greene told Insider that, "I have an independent investment advisor that has full discretionary authority on my accounts."
CONGRESS & COURTS・1 DAY AGO