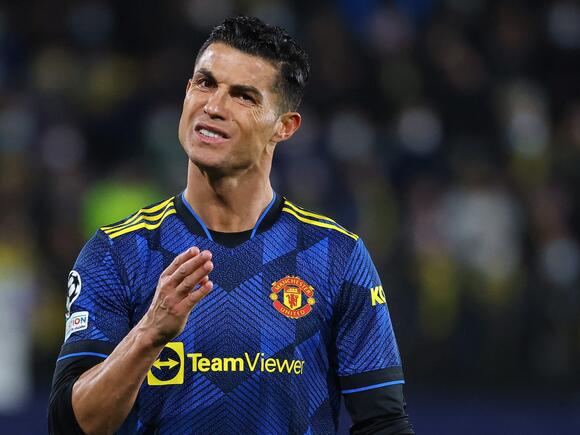 Cristiano Ronaldo has hit back at claims from a key organizer of the Ballon d'Or that his main aim is to win the trophy more times than his great rival, Lionel Messi.

Earlier this week, Pascal Ferre, the editor in chief of France Football — the publication behind the Ballon d'Or — claimed in a The New York Times interview that Ronaldo had confided in him that his primary ambition is to retire having won the accolade more times than his rival.

Ronaldo has scooped soccer's most esteemed individual prize five times, while Messi won it for a record seventh time on Monday.

"Ronaldo has only one ambition, and that is to retire with more Ballons d'Or than Messi, and I know that because he has told me," said Ferre.

Writing in Portuguese on Instagram after Monday's award ceremony, Ronaldo slammed Ferre for his comments, and accused him of lying.

"Pascal Ferre lied, he used my name to promote himself and to promote the publication he works for," the Manchester United forward said, according to a translated version of the post.

"It is unacceptable that the person responsible for awarding such a prestigious prize could lie in this way, in absolute disrespect for someone who has always respected France Football and the Ballon d'Or.

"The biggest ambition of my career is to win national and international titles for the clubs I represent and for the national team in my country.

Ronaldo was absent from this year's Ballon d'Or ceremony in Paris.

In the Instagram post, the 36-year-old also hit back at claims that he had missed the awards due to being in quarantine, while he also refuted suggestions of poor sportsmanship.

"And [Ferre] lied again today, justifying my absence from the gala with an alleged quarantine that has no reason to exist," he continued on Instagram.

"I always want to congratulate those who win, within the sportsmanship and fair play that have guided my career since the beginning, and I do it because I'm never against anyone.

Ronaldo finished sixth in this year's Ballon d'Or voting, the first time he has not ranked in the award's top three since 2010.

Ronaldo was dragged off in the 71st minute of Manchester United's 3-1 win over Brentford to be replaced by defender Harry Maguire.
PREMIER LEAGUE・23 HOURS AGO
The Independent

Cristiano Ronaldo is expected to be available for Manchester United's trip to Brentford though will have to come through Tuesday's training sesssion at Carrington, Ralf Rangnick has said.Ronaldo and Marcus Rashford were left out of United's match day squad for Saturday's 2-2 draw at Aston Villa, missing their second consecutive game despite Rangnick expecting both to return.The United interim manager said both players were ruled out of making the trip to Villa Park after Friday's late training session but says both are currently in contention to play Brentford."Cristiano and Marcus were training yesterday so I suppose they will be training...
PREMIER LEAGUE・2 DAYS AGO
Insider

Fans in the crowd at the Rod Laver Arena were imitating Cristiano Ronaldo's "SIUUU" celebration, which Medvedev mistook for boos.
TENNIS・19 HOURS AGO
San Diego Union-Tribune

Ralf Rangnick stood by his decision to substitute Cristiano Ronaldo despite the striker’s angry reaction during Manchester United’s 3-1 win at Brentford.Goals from Anthony Elanga, Mason Greenwood and Marcus Rashford boosted Manchester United’s top-four ambitions.But the spotlight was once again on Ronaldo, who was far from impressed when his number came up with 20 minutes left.The striker trudged off slowly before hurling his coat to the floor as he sat down muttering “why?”.However, United interim boss Rangnick said: “He was asking ‘why me’?. But I told him I take the decisions in the interest of the team.“We were 2-0 up...
PREMIER LEAGUE・1 DAY AGO
The Guardian

Manchester United rode their luck in the first half, but were ruthless in the second to continue their push for the top four
PREMIER LEAGUE・1 DAY AGO
allkpop.com

BTS's V joins Billie Eilish, Cristiano Ronaldo, and Lionel Messi as the only 4 people in the world to have 4 posts with over 17 MILLION likes on Instagram

Was this the attitude Cristiano Ronaldo demanded?Whatever about refusing to accept criticism, Manchester United’s new generation refused to accept anything other than victory.It was certainly the response, and the result, Ralf Rangnick and his team needed.On a night when they were often second best to Brentford, and mere days after Ronaldo gave such a pointed interview about the attitude of younger players, three of the club’s youth graduates scored to secure a crucial 3-1 win in the race for fourth. The table looks that bit better for United. The mood is that bit improved.That’s the spirit of youth, that feels...
PREMIER LEAGUE・1 DAY AGO

Bayern Munich forward Robert Lewandowski equalled Cristiano Ronaldo’s FIFA The Best record when he won the award for a second time on Monday. The Bayern Munich forward retained his FIFA The Best award following an incredible campaign in which he scored a Bundesliga record 41 goals, fighting off competition from Lionel Messi and Mohamed Salah.
FIFA・2 DAYS AGO
newschain

Cristiano Ronaldo has had a topsy-turvy time since rejoining Manchester United in the summer. The 36-year-old returned under former team-mate Ole Gunnar Solskjaer and now plays for Ralf Rangnick, who he was mightily frustrated with when taken off at Brentford on Wednesday night. The interim boss publicly defused the issue...
PREMIER LEAGUE・21 HOURS AGO
fourfourtwo.com

What is Cristiano Ronaldo's "Siuuuu" celebration about?

You might have heard people shout "Siuuuu!" at some point over the last few years and wondered just what on Earth was wrong with them. Or maybe you know that it stems from Cristiano Ronaldo's famous celebration, and still wondered what the hell was going on. Thank you for reading...
SOCCER・1 DAY AGO
Daily Mail

Cristiano Ronaldo showed off his latest prize after returning from the Best FIFA Football Awards 2021 by private jet. The Manchester United forward shared an image on Instagram of him holding his FIFA Special Award after he touched down in Manchester following the short flight from Zurich on Monday night.
PREMIER LEAGUE・2 DAYS AGO

Cristiano Ronaldo has style on and off the soccer field. The Manchester United star player has graced the covers of magazines and red carpet events in the most exclusive clothing and footwear. Ronaldo is a fan of bold color suits and tailored jackets sometimes paired with luxury sneakers. Ronaldo’s own merchandise brand CR7 offers many products like eyewear, boots, loafers and men’s sandals. Previously, the athlete and business mogul collaborated with Nike on a, Air Max 97 sneaker. The sneaker featured a leather patchwork design on the all-red uppers. In 2016, the star signed a lifetime contract with Nike for an estimated...
FIFA・16 HOURS AGO
The Independent

What the papers sayCristiano Ronaldo could be set to leave Manchester United after just one season back at Old Trafford. The Sun reports Ronaldo’s representatives have told the club that failure to qualify for next season’s Champions League would prompt the 36-year-old to look for an exit.The same paper writes that Tottenham defender Japhet Tanganga is a target for AC Milan. Spurs would reportedly be willing to sell the 22-year-old for £21million, but the Serie A title challengers are said to prefer a loan deal.Arsenal have received a loan offer for former captain Pierre-Emerick Aubameyang from Saudi Arabian team Al-Nassr,...
PREMIER LEAGUE・1 DAY AGO
The Independent

Ralf Rangnick has no concerns about selecting Paul Pogba during the final months of his Manchester United contract, even if the midfielder’s only motivation to play well is to earn a deal at another club.Pogba has entered the final six month of his current Old Trafford terms, with little progress made in discussions over a renewal and a departure on a free transfer in the summer considered likely.The 28-year-old is yet to make an appearance under interim manager Rangnick after suffering a thigh injury while on international duty in November, though returned to full training on Monday.Rangnick expects Pogba...
PREMIER LEAGUE・2 DAYS AGO
AFP

Derby manager Wayne Rooney is in contention for an emotional return to Everton after the former England star's impressive handling of affairs on the pitch despite a financial crisis at the Championship club. Rooney is among the bookmakers' favourites to take permanent charge at Goodison Park after Rafael Benitez was sacked on Sunday. The 36-year-old made his name at Everton as a precocious teenager before rejoining his boyhood club following a glittering spell at Manchester United. And, in his short time as a manager, Rooney has offered evidence that the potential return of the prodigal son would be more than just an olive branch to Everton supporters infuriated by the dismal reign of the despised Benitez.
PREMIER LEAGUE・2 DAYS AGO
San Diego Union-Tribune

Both AC Milan and Juventus have recent bad memories of San Siro ahead of their eagerly-anticipated Serie A match at the iconic stadium on Sunday
SOCCER・18 HOURS AGO
firstsportz.com

Real Madrid won the Spanish Super Cup for the 12th time in the history of the competition defeating Athletic Bilbao 2-0 in the final on Sunday which took place in Saudi Arabia. Luka Modric and Karim Benzema scored the goals their side. Real booked a place in the final after winning the semi final 3-2 against arch rivals Barcelona in what was an entertaining El Clasico. Spanish Super Cup victory will do tons of good to Real Madrid going forward this season and is surely a welcome trophy for new manager Carlo Ancelotti who took over at the start of the season from Everton for his second spell at Santiago Bernabeau.
SOCCER・2 DAYS AGO
San Diego Union-Tribune