Injured Sarr could miss African Cup of Nations with Senegal 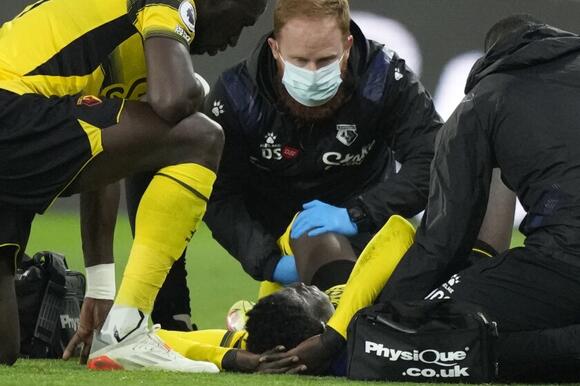 Senegal could be without Ismaïla Sarr for the African Cup of Nations because the winger has a knee ligament injury.

Sarr was hurt in Watford’s 4-1 win over Manchester United in the Premier League on Nov. 20 and will require a further scan “in around a month’s time,” the English club said Tuesday, before another update is given on his condition.

The African Cup starts on Jan. 9 and players are scheduled to join up with their national teams at the end of December.

Sarr helped Senegal reach the final of the tournament in 2019, when the team lost to Algeria 1-0.

Sarr was unavailable for Watford’s 4-2 loss at Leicester on Sunday and is set to miss at least seven more games in the Premier League heading into the busy festive period, starting with the visit of Chelsea on Wednesday.

We are rapidly heading towards the end of January and Burnley have still played just 17 of their 38 Premier League games. Sean Dyche’s men have only played two league matches since the middle of December due to Covid and injury problems.Burnley currently sit bottom of the table but know positive results in their games in hand could prove vital in their bid to avoid the drop.Meanwhile, Tottenham’s late win at Leicester on Wednesday saw them leapfrog Arsenal, so this match is equally crucial for Mikel Arteta’s side if they are to keep pace in the top four race.Burnley have...
PREMIER LEAGUE・1 DAY AGO
The Independent

Substitute Tobin Heath scored an injury-time equaliser as Women’s Super League leaders Arsenal snatched a 1-1 draw at Manchester City Heath drilled home in the second of six added minutes to ensure the visitors avoided a second straight defeat in the league following their shock loss to Birmingham a fortnight ago.Khadija Shaw had given City the lead in controversial circumstances after 65 minutes, the Jamaican international tapping home from close range from Lauren Hemp’s low cross.Arsenal were furious that play had been allowed to continue when the ball deflected off the referee in the build-up to the goal, but their...
WORLD・1 DAY AGO

The Tottenham Hotspur dressing room has been just like fans’ groups in the last two days. The players have been giddily sharing videos of the last few minutes at Leicester City. Of particular joy has been Antonio Conte going to hug a steward, which has naturally been pointed out to the manager.A glee has totally replaced a developing sense of gloom. The fretful questions people around the club had been asking have been totally washed away. They’re no longer wondering whether Conte could really walk, or if this is the most difficult situation he’s walked into.The talk is now only...
PREMIER LEAGUE・2 DAYS AGO
The Independent

Spain’s top teams have been focused on cup antics most recently, particularly with the frequent meetings between FC Barcelona, Real Madrid and Athletic Club in particular.A Clasico meeting in the Supercopa semi-final was followed by Los Blancos triumphing over the Basque outfit in the final, while last year’s Copa del Rey final was repeated on Thursday night in a last-16 clash - but, unlike last season’s trophy-winning performance from the Camp Nou club, it was Athletic who beat Barca this time around. Now, continuing the recent theme of the trio of teams facing off with regularity, Athletic will play Real...
SOCCER・1 DAY AGO
San Diego Union-Tribune

A key clash in the battle for European places will be on show at Old Trafford on Saturday afternoon, where Manchester United host West Ham United.David Moyes’ side have been extremely impressive for the majority of this term and remain in fourth in the Premier League table, where a huge battle is developing between at least four sides.These teams met twice in short order earlier in the season, United winning in the league in dramatic fashion before the Hammers knocked them out of the Carabao Cup, but there’s arguably even more at stake this time around - in part due...
PREMIER LEAGUE・2 DAYS AGO
San Diego Union-Tribune

Thomas Tuchel: Chelsea do not have psychological edge over Spurs

Thomas Tuchel has warned Chelsea not to expect a psychological edge over Tottenham after dumping Spurs out of the Carabao Cup.Chelsea will meet Tottenham for the third time this month in Sunday’s Premier League clash at Stamford Bridge.The Blues beat their bitter London rivals 3-0 on aggregate across the two-legged League Cup semi-final, but boss Tuchel has rejected any ideas of a mental advantage.“We have played three matches in such a short time which is pretty unusual and uncommon normally, that is why they know what we do and we know more or less what they do,” said Tuchel.“But it...
PREMIER LEAGUE・2 DAYS AGO
The Independent

Manchester City travel to the south coast on Saturday evening to try and extent their lead at the top of the Premier League by beating Southampton.Saints held Pep Guardiola’s men to a goalless draw back in October but today’s visitors have been in scintillating form in recent months, winning their last 12 consecutive league fixtures and building up a lead of 11 points to second-placed Liverpool and 14 to Chelsea in third.Kevin De Bruyne’s superb curling finish was enough to secure victory over the Blues last time out, and the Belgian could start up front at St. Mary’s with Raheem...
PREMIER LEAGUE・2 DAYS AGO
The Independent

Thomas Tuchel hopes Hakim Ziyech’s wonder goal and victory over Tottenham will hand Chelsea renewed confidence following an indifferent run of form as they look to shut down any worries about a top-four Premier League finish.Ziyech’s moment of magic teed up Chelsea’s 2-0 win over Spurs on Sunday, their third victory against their London rivals in this month.Thiago Silva’s header cemented Chelsea’s first league win in five outings since their success at Aston Villa on Boxing Day.Now the bulk of Chelsea’s players can head into a week off satisfied to have reasserted some Premier League authority, with the Blues remaining...
PREMIER LEAGUE・18 HOURS AGO

“Reunite” and “refocus” were two words Mikel Arteta used to describe what Arsenal are hoping to get out of their trip to Dubai during the two-week winter break. After the last couple of months, time away is no bad thing. If only to draw a line under their current malaise. For the first time in 27 years, Arsenal have the ignominy of failing to win their first five games in a calendar year. That being said, perhaps those aren’t quite the areas that need to be cultivated or honed. Sunday’s draw against Burnley was many things. Infuriating for the Gunners,...
PREMIER LEAGUE・22 HOURS AGO
The Independent

Everton are taking Aston Villa at Goodison Park this afternoon as the Toffees begin life after Rafa Benitez. The Spanish manager was sacked following a dismal run of results which have left them 16th in the Premier League with only five wins all season, and it is down to caretaker manager Duncan Ferguson to arrest the slide while the club searches for a permanent replacement. Villa meanwhile are enjoying life under Steven Gerrard, and victory today would lift them into the top half of the table at least temporarily before this afternoon’s matches. The obvious sub-plot is Gerrard vs Ferguson,...
PREMIER LEAGUE・2 DAYS AGO
The Independent

Welcome to The Independent’s live coverage of a huge London derby between Chelsea and Tottenham at Stamford Bridge. Thomas Tuchel’s side have already beaten Spurs three times so far this season, scoring seven goals and keeping three clean sheets in the process. But Chelsea have struggled of late as their title ambitions have slipped away. They now sit 13 points off Manchester City as securing a top four place becomes a more realistic target.Meanwhile, Spurs are unbeaten in nine Premier League games under Antonio Conte and are now in a superb position to qualify for next season’s Champions League....
PREMIER LEAGUE・1 DAY AGO