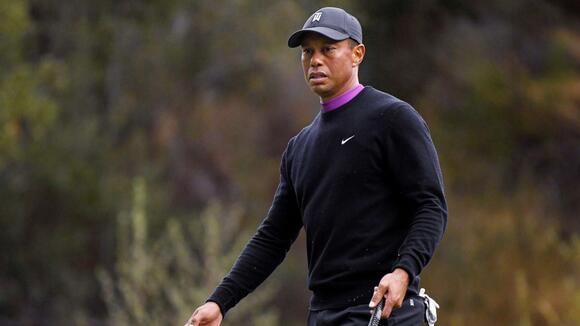 Tiger Woods is opening up about his road to recovery after a devastating car crash nearly cost him his life.

In an interview with Golf Digest , the golf legend revealed how he wishes he could go back to doing the things he could do before the accident.

"I'm not Wolverine, even though sometimes I think I am," he said. "It's just one of those things where I wish I could go and do everything I used to do and I can't."

In February, the 45-year-old professional golfer sustained serious leg injuries in a rollover crash in Southern California. The car he was driving, a 2021 Genesis GV80 mid-size SUV, was found several hundred feet away from the center divider, in an area that has a "high-frequency" of accidents, officials said at the time.

Authorities later stated that Woods wouldn't face charges, due to no "evidence of impairment" found by investigators when he was treated at the scene.

Los Angeles County Sheriff Alex Villanueva told reporters at the time, "We don't contemplate any charges whatsoever in this crash" and that the wreck was "purely an accident."

After his right leg was shattered by an open fracture, Woods told Golf Digest that he feared that he would never walk the same -- let alone play golf again.

"There was a point in time I won't say it was 50/50 but it was [expletive] near there that I was going to walk out of that hospital with one leg," he said. "Once I [kept it], I wanted to test and see if I still had my hands."

MORE: Tiger Woods opens up on parenting, why he doesn't coach his son in golf

Woods said he would have his girlfriend, Erica Herman, and his friend Rob McNamara throw him things to move his arms.

Following his accident, Woods began a rehabilitation process that included three months in a hospital-type bed in his home. He then used a wheelchair, then crutches, which eventually led to him moving on his own.

Woods said the lessons he learned from his father helped him get through those challenging months.

"This is where dad's teaching came into play. You don't know how long a firefight is gonna take," he said. "One of my dad's ways of getting through that was live meal-to-meal -- I just shortened up the windows of, 'Oh, this is gonna be nine months of hell' to 'It's just two or three hours.' If I can repeat these two to three hours at a time. Next thing you know it adds up."

The golf pro said his greatest motivation to recover is his son, Charlie. During rehab, Woods said they spent time bonding over golf.

While Woods said he misses being a competitor, he's also come to terms with the end of his days as a full-time tournament golfer.

"I think something that is realistic is playing the tour one day -- never full time, ever again -- but pick and choose," he said. "It's an unfortunate reality, but it's my reality. And I understand it, and I accept it."

Rory McIlroy neatly summed up the feelings of the windswept field after battling to make the halfway cut in the Abu Dhabi Championship.“I’ve never been so glad to get off a golf course,” McIlroy was overheard saying after he birdied the 18th hole at Yas Links to complete a hard-fought 75 on a day of persistent strong wind and gusts of up to 35mph.McIlroy had been comfortably inside the cut line when he holed from five feet for an eagle on the par-five seventh, but dropped four shots in five holes from the 13th before getting up and down from...
GOLF・1 DAY AGO
Sportsnaut

The 17-year-old from Texas told viewers she was "grieving the things that I've lost," but wanted to share the bad times as well as the good.
BEHIND VIRAL VIDEOS・1 DAY AGO

Hideki Matsuyama won last week's Sony Open in Hawaii in emphatic style, knocking a 3-wood to 3 feet to win a playoff with Russell Henley. That club may have produced the winning shot, but the putter was Matsuyama's most important club at Waialae. Matsuyama led the field in Strokes Gained:...
GOLF・2 DAYS AGO
KHON2

ORLANDO, Fla. (AP) – Gaby Lopez of Mexico began a new year and her seventh LPGA Tour season with a simple, and potentially prophetic, Instagram post: “Surprise me, 2022,” she wrote. Lopez jumped out to the lead Thursday in the Hilton Grand Vacations Tournament of Champions, piecing together what she considered a near-perfect opening round […]
HAWAII STATE・1 DAY AGO
GMA

World No. 1 Nelly Korda shot a 6-under-par 66 on Friday to vault herself past Mexico’s Gaby Lopez and into
ORLANDO, FL・1 DAY AGO

Patrick Cantlay fought through gusting wind on his back nine to take a one-stroke lead into the weekend at The American Express
LA QUINTA, CA・20 HOURS AGO
Sportsnaut

Ernie Els on top after first round of Champions season

Rory McIlroy talks about his 2022 in an interview with "The Indipendent", who writes that he will "take a leaf from Tiger Woods’ book" “I used to sit down on the flight here and write down I want to win five times, I want to win a major, I want to win The Race to Dubai, I want to win the FedExCup, I want to do this or that.
GOLF・2 DAYS AGO

Tiger Woods has named Aaron Beverly as the recipient of the Charlie Sifford Memorial Exemption which will grant him entry to the 2022 Genesis Invitational. The Charlie Sifford Memorial Exemption is awarded annually and represents "the advancement of diversity in the game of golf." Tiger Woods and Aaron Beverly. Woods...
GOLF・1 DAY AGO
Tennis World Usa

Tiger Woods, the osteopath is not optimistic

GolfMagic spoke to Poora Singh, a leading osteopath based at the Edgbaston Performance Clinic. "Tiger Woods at the Masters? Let’s break it down. You've got to go from a point from where the bone didn't even have any joints and then being bonded. And then once it's bonded, you...
GOLF・5 HOURS AGO
San Diego Union-Tribune

Patrick Cantlay shot a 10-under 62 in perfect conditions at La Quinta Country Club for a share of the first-round lead with rookie Lee Hodges in The American Express
LA QUINTA, CA・1 DAY AGO