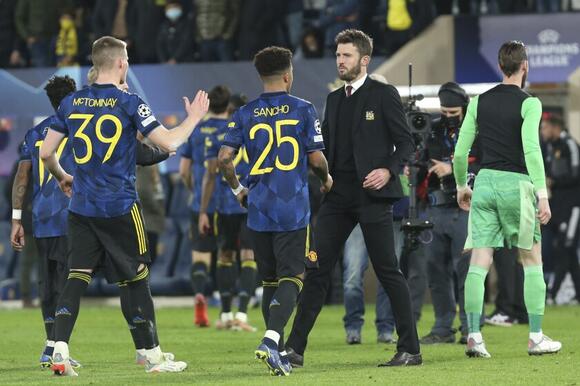 Michael Carrick will lead Manchester United in the Premier League game against Arsenal on Thursday while manager Ralf Rangnick waits to secure a work visa.

Carrick was put in charge of the team on an interim basis following the firing of Ole Gunnar Solskjaer on Nov. 21 and has had two games at the helm — a 2-0 win at Villarreal in the Champions League and a 1-1 draw at Chelsea in the Premier League.

Rangnick was hired as manager until the end of the season on Monday. He was previously working in Russia as head of sports and development at Lokomotiv Moscow.

“While the club follows the regulatory process around a work visa, Carrick will continue at the helm,” United said Tuesday.

Ralf Rangnick praised Harry Maguire for producing a performance befitting the captain’s armband on his return to the Manchester United starting line-up.The world’s most expensive defender has been under close scrutiny this season, both for his displays in the heart of defence and leadership of the team.Maguire missed the first two matches of 2022 with a chest injury and was named on the bench against Aston Villa and Brentford as Rangnick favoured Victor Lindelof alongside Raphael Varane.But the United skipper was restored to the starting line-up against West Ham in the absence of Lindelof, who was supporting his family after...
PREMIER LEAGUE・22 HOURS AGO
firstsportz.com

Manchester United faced top 4 rivals West Ham United at Old Trafford in the Premier League. The game was dominated by the Red Devils for most of the time but they failed to create opportunities against David Moyes’ side until the last minute of the game. It was a...
PREMIER LEAGUE・1 DAY AGO
punditarena.com

Ralf Rangnick on where Man United must improve

He isn’t settling for what he saw on Saturday. Ralf Rangnick has outlined the one place where he feels his Manchester United side must improve. The United interim manager was extremely pleased after his side beat West Ham 1-0 on Saturday evening, but made it clear that there was still ways to improve on the win.
PREMIER LEAGUE・1 DAY AGO

Arsenal lost ground in the race for the top four as they were held to a goalless draw by Burnley at the Emirates Stadium. The Gunners dominated the game, attempting 20 shots and having 76 per cent of the possession, but bottom side Burnley, who had not played a Premier League fixture in three weeks due to Covid postponements, defended resolutely to claim a valuable point.
PREMIER LEAGUE・1 DAY AGO
The Independent

It was the last meaningful kick of this game but the most meaningful kick of Ralf Rangnick’s interim spell in charge of Manchester United so far. The stoppage time, 93rd-minute winner pushed United above their visitors West Ham and into the Premier League’s top four for the first time since October, making the minimum expectation for this season suddenly look a lot more realistic, and it could also be an especially meaningful goal for the scorer.Much has been made about Marcus Rashford’s form of late but, after ending a long drought in the impressive midweek victory at Brentford, this should...
PREMIER LEAGUE・2 DAYS AGO
The Independent

Ralf Rangnick loved the Old Trafford atmosphere, Manchester United’s defensive display and super-sub Marcus Rashford’s impact in the stoppage-time win against West Ham.The top-four rivals looked set to play out a drab goalless draw on Saturday afternoon as former United boss David Moyes’ well-drilled side produced a solid performance at Old Trafford.West Ham had already won there this season in the Carabao Cup but this time United emerged victorious as Rangnick threw caution to the wind, bringing on Anthony Martial Edinson Cavani and Rashford.All three were involved in the third and final minute of stoppage time, with the latter...
PREMIER LEAGUE・2 DAYS AGO
The Independent

With eight minutes plus stoppage time remaining and Manchester United still searching for a winner against West Ham, some jeers could be heard when Mason Greenwood’s number flashed up. It was not the first time that Old Trafford has registered its displeasure with Greenwood’s removal recently. The same happened in the defeat to Wolverhampton Wanderers. This time was different, though. It was not so much about the player coming off as the one coming on.Anthony Martial had not played a single minute under Ralf Rangnick at that point. A week earlier, he had been absent from the match day squad...
PREMIER LEAGUE・7 HOURS AGO

An Everton supporter has been arrested after two Aston Villa players were floored by a bottle thrown from the crowd during the visitors’ 1-0 Premier League win at Goodison Park.Former Everton defender Lucas Digne who had only left the Toffees nine days earlier, and Matty Cash both ended up on the ground as Villa players celebrated Emiliano Buendia’s first-half winner.“Police have arrested a supporter at Goodison Park for throwing a missile onto the pitch during today’s Premier League match against Aston Villa,” read an Everton statement on the club website.Police have arrested a supporter at Goodison Park for throwing...
PREMIER LEAGUE・2 DAYS AGO
The Independent

A key clash in the battle for European places will be on show at Old Trafford on Saturday afternoon, where Manchester United host West Ham United.David Moyes’ side have been extremely impressive for the majority of this term and remain in fourth in the Premier League table, where a huge battle is developing between at least four sides.These teams met twice in short order earlier in the season, United winning in the league in dramatic fashion before the Hammers knocked them out of the Carabao Cup, but there’s arguably even more at stake this time around - in part due...
PREMIER LEAGUE・2 DAYS AGO
San Diego Union-Tribune

Real Madrid scored twice in the final 10 minutes to avoid an embarrassing LaLiga home defeat to Elche.The Valencians were on course for a memorable win at the Bernabeu as they led 2-0 after 82 minutes, with goals from Lucas Boye and Pere Milla.But Luka Modric got his side back in it from the spot and then Eder Militao made it 2-2 in the second minute of time added on as Carlo Ancellotti’s men extended their lead at the summit to four points.💪 That scoring feeling! @edermilitao | #RealMadridElche pic.twitter.com/i9eyHplrmf— Real Madrid C.F. 🇬🇧🇺🇸 (@realmadriden) January 23, 2022Barcelona also needed...
SOCCER・22 HOURS AGO
San Diego Union-Tribune

On a frustrating evening for the pair of big-name strikers, they once again struggled to show why they were so sought-after last summer
PREMIER LEAGUE・23 HOURS AGO

Everton are taking Aston Villa at Goodison Park this afternoon as the Toffees begin life after Rafa Benitez. The Spanish manager was sacked following a dismal run of results which have left them 16th in the Premier League with only five wins all season, and it is down to caretaker manager Duncan Ferguson to arrest the slide while the club searches for a permanent replacement.Villa meanwhile are enjoying life under Steven Gerrard, and victory today would lift them into the top half of the table at least temporarily before this afternoon’s matches. The obvious sub-plot is Gerrard vs Ferguson, two...
PREMIER LEAGUE・2 DAYS AGO
The Independent

Virgil van Dijk insists Liverpool are paying no attention to Manchester City despite closing the gap on their Premier League title rivals.A hard-fought 3-1 win at Crystal Palace on Sunday lifted the Reds to within nine points of Pep Guardiola’s side, who were held to a 1-1 draw away to Southampton on Saturday.City have played a game more than Liverpool and the Merseyside outfit are set to visit the Etihad Stadium in April, leaving plenty to play for.“You can’t deny it’s in your mind, but as we have said many times we take it game by game,” Van Dijk said...
PREMIER LEAGUE・10 HOURS AGO