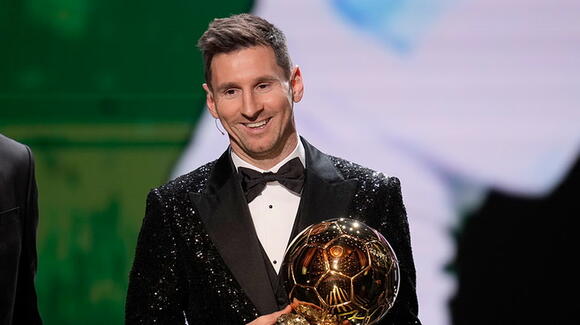 Lionel Messi ’s record Ballon d’Or win has been celebrated in a strange way in Paris - with a series of goat statues.

Seven statues, representing each of his seven Ballon d’Or trophies, were placed in front of the Eiffel Tower and posted to Instagram by Adidas. The company captioned the post: “A legacy unrivalled.”

There is a lot of debate surrounding who is the GOAT of football with the central discussion circling Messi and Cristiano Ronaldo. But the celebration of Messi’s Ballon d’Or win on Monday has seen a lot of people give the title to him.

And the man himself was ecstatic with the win. The Paris Saint-Germain player said in his acceptance speech: “It’s incredible to be here again.

“Two years ago I thought it was the last time. People were starting to ask me when I was going to retire but now I’m here in Paris and very happy.

“It’s a special year for me with this Copa America title. It meant a lot to win [1-0 against Brazil in the final] at the Maracana stadium and I was so happy to celebrate with the people from Argentina.

“I don’t know if it’s the best year of my life - I’ve had a long career - but it was a special one with the title with Argentina after the tough times and the criticism.”

Barcelona’s Alexia Putellas won the women’s Ballon d’Or with Robert Lewandowski picking up striker of the years, Gianluigi Donnarumma getting the keeper gong and Pedri won the Kopa trophy.

Ronaldo was dragged off in the 71st minute of Manchester United's 3-1 win over Brentford to be replaced by defender Harry Maguire.
PREMIER LEAGUE・2 DAYS AGO
The Independent

French rugby player Jordan Michallet has tragically passed away at the age of only 29.The fly-half had recently signed a new contract with club Rouen, who he helped to promotion in the second tier in France. The news was confirmed by the club who will honour him in their home game on Friday.They said: “The Rouen Normandie Rugby family is deeply saddened to announce the passing of our dear Jordan Michallet. This awful news plunges the whole club into immense pain.“The management and the whole club are joining forces with his family in this terrible ordeal.”Michallet had played for France...
RUGBY・2 DAYS AGO
San Diego Union-Tribune

Reigning champions Algeria were dumped out of the Africa Cup of Nations after an abject 3-1 defeat against the Ivory Coast as the group stage came to a conclusion on Thursday with Tunisia, Equatorial Guinea and tiny tournament debutants the Comoros all securing places in the last 16. Franck Kessie, Ibrahim Sangare and Arsenal's Nicolas Pepe all scored to put the Ivory Coast 3-0 up against Algeria in Cameroon's economic capital Douala, before Manchester City star Riyad Mahrez missed a penalty for the 2019 champions. Sofiane Bendebka eventually pulled one back with their first goal in over four hours of football at this year's tournament, but it was too little, too late for Djamel Belmadi's team. It is the fifth time in the last six Cups of Nations that the reigning champions have failed to make the AFCON knockout phase, but there has arguably never been a worse title defence.
SOCCER・2 DAYS AGO

Marcus Rashford eased the gloom around Old Trafford with a stoppage-time winner as Manchester United snatched a dramatic 1-0 Premier League win over West Ham.Ralf Rangnick’s men looked set for more frustration in a poor quality encounter before Rashford latched onto a neat pass from fellow substitute Edinson Cavani to fire home with virtually the last kick of the game.Cristiano Ronaldo had gone close in the opening period and was denied a penalty appeal as David Moyes’ Hammers began to grow in confidence.Fred had the first shot on target for the hosts in the 49th minute which was well saved...
PREMIER LEAGUE・17 HOURS AGO
The Independent

Liverpool are through to the Carabao Cup final after beating Arsenal 2-0 on the night and on aggregate.They will face Chelsea at Wembley, after a dominant showing in the semi-final second leg which saw the Gunners end with 10 men after a late Thomas Partey red card.Diogo Jota raced infield to strike home the game’s first goal from the edge of the box midway through the first half, and the Portuguese forward was the star of the show, lobbing in a second to send the Reds clear.Partey had been on the pitch fewer than 20 minutes when he picked up...
PREMIER LEAGUE・2 DAYS AGO
San Diego Union-Tribune

Crystal Palace boss Patrick Vieira has played down the absence of key Liverpool duo Mohamed Salah and Sadio Mane for Sunday’s meeting at Selhurst Park.The Reds will again be without their two main attackers, who are away competing at the Africa Cup of Nations in Cameroon.It will no doubt boost Palace, who lost 3-0 to Liverpool in September with the pair on target and both hit doubles against the south London outfit last season too.Jurgen Klopp’s side have coped well without Salah and Mane, winning three of the four games they have missed to progress in two cup competitions and...
PREMIER LEAGUE・1 DAY AGO
The Independent

Liverpool reached the Carabao Cup final for the first time in six years as Diogo Jota’s brace was enough to seal semi-final success at the expense of 10-man Arsenal.After a goalless first leg at Anfield last week, Jota’s first-half daisycutter caught Aaron Ramsdale flat-footed and he then saw a second-half VAR check rule he was onside following a smart finish as Liverpool won 2-0 at the Emirates Stadium.To top off a miserable night for Arsenal, Thomas Partey – who only returned from the Africa Cup of Nations earlier in the day – was sent off just 16 minutes after coming...
PREMIER LEAGUE・2 DAYS AGO
The Independent

Real Madrid star Toni Kroos was left stunned and confused when he received a yellow card for a ghost tackle during the club’s Copa del Rey victory over Elche.Kroos went in for a challenge but didn’t connect with the ball or forward Tete Morente but the player threw himself to the floor and referee Jorge Figueroa Vazquez gave a free kick.The former German international protested the call which earned him the yellow card and posted on Twitter afterwards to sum up his displeasure at the decision. Despite the controversial decision, Carlo Ancelotti’s side came from behind to win the last...
SOCCER・1 DAY AGO
The Independent

Steven Bergwijn was delighted to follow Antonio Conte’s instructions and deliver a dramatic stoppage-time win for Tottenham at Leicester.The Netherlands international scored twice in 79 seconds of time added on to turn Spurs’ 2-1 deficit into a memorable 3-2 victory.He was sent on in the 78th minute, two minutes after James Maddison had put the Foxes on course for the three points in their first Premier League game of 2022 with a clear instruction from Conte – to score.Bergwijn, who has been subject of a bid from Ajax in the January transfer window, duly obliged, firing home from close range...
PREMIER LEAGUE・2 DAYS AGO

Who came back? Who fell away? Who changed tracks?
NFL・1 DAY AGO
The Independent

It is perhaps a poetic encapsulation of this rearranged semi-final, framed by Covid “false positive” conspiracies, that having spent the first-leg toiling and failing to score, Liverpool’s breakthrough at the Emirates arrived when Diogo Jota failed to properly connect with a shot.Nothing surrounding this League Cup tussle has made much sense, just noise and more noise with each fanbase looking to undercut the other by pointing to plots and poisonous accusations.But the actual football amplified a truth that tends to get skimmed past: Jota has been a phenomenal buy for Liverpool. The match-winner here, their match-winner so often.Adding to an...
PREMIER LEAGUE・2 DAYS AGO
The Independent

Super-sub Marcus Rashford struck a dramatic stoppage-time winner as Manchester United broke West Ham hearts and lifted the roof off Old Trafford.In the Carabao Cup earlier in the season David Moyes led the Hammers to their first win at the Red Devils since 2007 and he looked set to leave with a potentially vital point in the race for Champions League qualification.But United dug deep and secured victory with virtually the last kick of the game as Edinson Cavani crossed for fellow substitute Rashford to score in front of a rocking Stretford End to seal a 1-0 win.It was a...
PREMIER LEAGUE・18 HOURS AGO
The Guardian

Álvaro Cervera, lauded by fans as the club’s greatest ever manager, has moved on with the club struggling for survival
WORLD・2 DAYS AGO
The Independent

Cristiano Ronaldo is a doubt for Manchester United’s match against West Ham due to a neck complaint.Having missed two matches with a hip flexor issue, the 36-year-old frontman returned in Wednesday’s 3-1 Premier League win at Brentford.Ronaldo made headlines with his reaction to being taken off in the second half by interim boss Ralf Rangnick who has revealed the forward might be absent entirely on Saturday.“Cristiano is a question mark because he has a problem with his neck,” he told MUTV.“He received treatment yesterday for two or three hours and we will have to wait to see how he...
PREMIER LEAGUE・1 DAY AGO
LFCTransferRoom

Exclusive: 'It Is My Wish' - Former Real Madrid & Chelsea Star Geremi on Mohamed Salah Winning the Ballon D’or in the Future

In an exclusive interview, Cameroon legend Geremi has said that he would be 'proud' if Liverpool's Mohamed Salah won the Ballon d'Or. When Mohamed Salah finished seventh in last years Ballon d'Or, it shocked a lot of people. No one was expecting him to win it last year but most...
PREMIER LEAGUE・1 DAY AGO