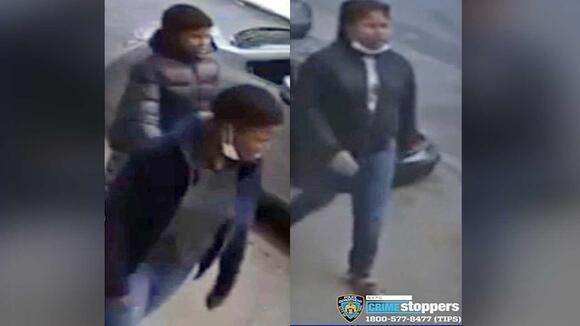 Investigators are searching for three suspects behind a string of attacks against Jewish ultra-Orthodox children in Brooklyn. Police say the three women seen in surveillance pictures are linked to three incidents. They are accused of slapping a 3-year-old boy across the face last Friday, and police say the women approached an 18-year-old girl Sunday and pulled her to the ground. Later, they allegedly slapped a 9-year-old boy on the top of his head several times. ALSO READ | 2 men impersonating NYPD officers rob home in the Bronx: New video

All the victims were wearing traditional ultra-Orthodox Jewish attire at the time of the attacks. They happened in a South Williamsburg neighborhood where it is common for young children to walk in small groups or even alone. The Anti-Defamation League is offering a $10,000 reward for information. "There were a few cases of assault during the pandemic, but not that many," ADL Regional Director Scott Richman said. "But suddenly it's come back, and we've seen a number of assaults that we haven't seen since the pandemic started. I think this is the fourth reward we've offered in about five or six weeks, so we are seeing more cases of assault than we've seen in a long time." The victims were not seriously injured, but the impact coupled with the timing -- at the start of Chanukah -- sends a shiver through the community. ALSO READ | No confirmed cases of omicron variant in NYC, but new mask advisory issued

Brooklyn resident Kenseth Armstead said it's outrageous. "Anti-Semitism can't be can't be tolerated," he said. "If it were the reverse or if it were anyone who were targeting any person of color, I'd have the same idea. I think targeting anybody because of their difference is reprehensible. I think that's wrong, period." Anyone with information is urged to call the NYPD's Crime Stoppers Hotline at 1-800-577-TIPS (8477) or for Spanish, 1-888-57-PISTA (74782). You can also submit tips by visiting the CrimeStoppers website at crimestoppers.nypdonline.org or by messaging on Twitter @NYPDTips. ---------- * More Brooklyn news * Send us a news tip * Download the abc7NY app for breaking news alerts * Follow us on YouTube

Blacks keep on playing the race card swearing they are the victims! The only victims are innocent people who cross paths with these animals!!! Sorry that was kind of mean, I apologize to all animals putting them in same class as these " people" and I use that term loosely....

Gee, I wonder why the headline did not say 3 BLACK women?

An off-duty officer working security at an Upper West Side Duane Reade shot a suspect who police say had just stabbed a man.
MANHATTAN, NY・15 HOURS AGO
ABCNY

Taylor Swift, a multiple Grammy winner with a fervent fan base, has been plagued by stalkers at her Tribeca home as well as homes she owns in California and Rhode Island.
NEW YORK CITY, NY・7 HOURS AGO
ABCNY

Hundreds of people came to the 32 Precinct on Wednesday night, packing 135th Street in Harlem and standing in the cold, to share the burden for a moment, of a pain that will last a lifetime.
2 DAYS AGO

The artist says he wants to use his platform and his talent to help bridge the gap between the NYPD and the community.
NEW YORK CITY, NY・2 DAYS AGO
ABCNY

Police say the driver was parked in the Westchester Square section when someone walked up to his vehicle and shot him in the leg.
BRONX, NY・3 HOURS AGO
ABCNY

More than 100 weapons were seized and 11 people arrested following a six-month multi-agency investigation into "ghost guns" and other illegal firearms in Westchester and Putnam counties.
WESTCHESTER COUNTY, NY・1 DAY AGO
ABCNY

They worked diligently to inform desperate families of their loved ones' fates, in the hopes that the confirmation of a parent's, sibling's or child's passing can somehow help start the grieving process.
BRONX, NY・2 DAYS AGO

The 27-year-old officer, a four-year veteran of the NYPD, suffered life-threatening injuries after being shot in the head Friday night in Harlem. His partner did not survive.
MANHATTAN, NY・3 DAYS AGO
ABCNY

NYPD officer Wilbert Mora, who was shot and his partner killed while responding to a domestic call in Harlem, has died from his injuries, NYPD Commissioner Keechant Sewell announced Tuesday.
MANHATTAN, NY・3 DAYS AGO
ABCNY

A video taken by actor Michael Rapaport is shining a light on an increase in shoplifting incidents in New York City, including a Rite Aid in Manhattan.
NEW YORK CITY, NY・2 DAYS AGO
ABCNY

The murder of two NYPD officers is sparking renewed calls for overturning bail reforms enacted two years ago and cracking down on guns.
NEW YORK CITY, NY・1 DAY AGO
ABCNY