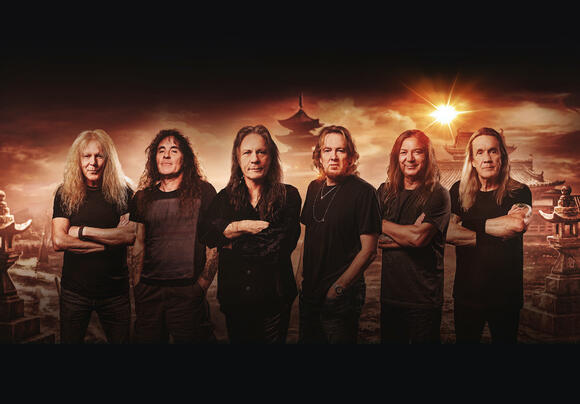 Iron Maiden has teamed up with Marvel for a new collection of exclusive merchandise themed around iconic Marvel characters.

This collaboration interweaves the universes of both brands, with designs that pay tribute to characters like Wolverine , Venom , Thanos, and Deadpool. The characters will appear in variations of the band’s album and single artwork, including for Fear of the Dark , Killers , and “The Trooper.” Iron Maiden’s iconic mascot, Eddie, will also appear in the artwork.

“Eddie has long stood shoulder to shoulder with the greatest superheroes and we’re also pretty proud of the Worlds we created for his many incarnations — from battlefields to Egyptian tombs to frozen icescapes or futuristic cities,” Iron Maiden manager Rod Smallwood said in a statement. “Juxtaposing some of the most recognizable characters in pop art and comic book culture into planet Maiden has been an ambition of ours for years and working with Marvel and their unparalleled character-based IP is the perfect fit in this day and age.”

He added, “To see such iconic characters alongside Eddie is something our fans have discussed for years and we think that the twist of placing Venom, Thanos, Thor, or Deadpool in our Maiden worlds will excite fans of both cultures.”

“Marvel is cool and aspirational, and has inspired the greatest artists, musicians, and creators for more than 80 years,” Paul Gitter, SVP, Marvel Licensing, added. “This collaboration offers another exciting example of how the Marvel brand continues to push into lifestyle areas, with music being a top priority, and the collection allows fans to pay tribute to our iconic characters while celebrating the legendary Iron Maiden.”

Iron Maiden’s most recent album, Senjutsu , dropped in September. The band recorded the record back in 2019 at Guillaume Tell Studios in Paris with longtime producer Kevin Shirley (bassist Steve Harris co-produced the record). The album marks the metal outfit’s 17th studio record and first since 2015’s The Book of Souls .

While Raveena is known for gauzy R&B drawn out with her air-light voice, her new track “Rush” is an upbeat, dance-driven feast of colors that mashes multiple worlds together: The Technicolor ode to Bollywood, which tells the story of a Punjabi princess traveling through space, was inspired by Indian percussion and an acid trip Raveena took while checking out an Eastern sound installation at the Rubin Museum. The song was written a few years ago and captures what Raveena calls an exploration of “a more intense marriage between Bollywood sounds and the pop/R&B music” she grew up on. In the video, which she co-directed with the director and photographer Munachi Osegbu, Raveena plays a character she came up with called Asha, a Punjabi space princess who makes friends with the highly intelligent beings from a distant planet. They appear in the video as shimmery puddle-like figures who back Raveena up as she pulls off playful choreography. At the end of their dance sequences, the song gently transitions into a delicate ballad, buoyed by the singer’s layered vocals. After releasing her debut album Lucid in 2019, Raveena dropped the four-song EP Moonstone. Last year, she released the twinkling single “Tweety.”
THEATER & DANCE・3 DAYS AGO
Rolling Stone

UPDATE (12/1): The Weeknd has offered up a new remix of “Sacrifice” featuring Swedish House Mafia that comes with a completely new music video as well. The “alternate world” clip isn’t nearly as creepy as the original, though it does boast some strange touches as white-eyed, levitating dancers achieve ultimate euphoria in what looks like a high school gymnasium.
MUSIC・5 DAYS AGO
Rolling Stone

The Streaming Era of television has also proved to be the Skip Intro era, where binge-watchers are encouraged to jump past the opening credits of their shows and get right into the plot. And many shows of this era offer long and tedious main title sequences for which this function seems a godsend. (The first major streaming drama, House of Cards, had a coma-inducing credits sequence that almost singlehandedly inspired Skip Intro.) Then there are the intros that you will never, ever want to skip, like the awesomely cheesy title sequence for HBO Max’s Peacemaker, in which John Cena and friends...
THEATER & DANCE・4 DAYS AGO
103GBF

Bruce Dickinson Explains Why Iron Maiden Fans Are So Loyal

While all bands have unique fanbases, some just have an incredibly loyal, cult-like following — such as Iron Maiden, and Bruce Dickinson has offered his take on why he thinks their fans are so dedicated to them. "I can't speak for every individual Iron Maiden fan, obviously, and I...
MUSIC・13 DAYS AGO

‘The Marvels’ Lands Laura Karpman From ‘What If…?’ as Composer (EXCLUSIVE)

Due to be released on Feb. 18, 2023, Karpman will work alongside director Nia DaCosta. Brie Larson returns as Carol Danvers/Captain Marvel, while Teyonah Parris stars as Monica Rambeau, reprising the role she originated in “WandaVision.”. More from Variety. Teyonah Parris Talks 'WandaVision' and Exploring Monica Rambeau in 'The...
MOVIES・5 DAYS AGO
epicstream.com

One of the upcoming MCU shows that are in the works is Ironheart which will focus on Riri Williams, a genius inventor who creates the most advanced suit of armor since Iron Man, with Dominique Thorne playing the role. Little is still known about the plot details of the series, but a rumor has recently emerged which suggested that it might connect to the very first MCU film.
COMICS・12 DAYS AGO
hypebeast.com

Following drop 3 of its inaugural merch collection, Star Trak is releasing a new collection comprising their signature pieces in new colors, exclusively on HBX. The latest range sees versatile everyday wear, including hoodies, t-shirts, caps, and socks bearing the iconic Star Track forum logo that resembles a lightning bolt. Continuing the nostalgic label’s affinity for a space theme, items in the new collection come in a standout combination of alien-like neon green and gray, as well as a classic black and white colorway.
DESIGNERS & COLLECTIONS・4 DAYS AGO
NME

Iron Maiden’s Bruce Dickinson has announced that he is working on a new solo album. The frontman said he has already made a start on the follow up to 2005’s ‘Tyranny Of Souls’ with long term collaborater Roy ‘Z’ Ramirez but he is still some way off completing the record.
MUSIC・11 DAYS AGO

Can we interest you in a place where the barbecue ribs are so good, you’ll bang your head in delight?. Yeah, because a real rock star is behind the counter. Well, maybe not the counter, but he’s behind the concept. Barbecue lovers and Iron Maiden fans get the...
RESTAURANTS・5 DAYS AGO
Sasquatch 92.1 FM

Iron Maiden vocalist Bruce Dickinson said the band was planning to arrange a tour of smaller-than-usual venues where they’d play their latest album, Senjutsu, in full. He accepted that some fans wouldn’t be interested in attending the performances, which is why they wouldn’t try to perform in places where they might struggle to sell out.
ROCK MUSIC・2 DAYS AGO
arcamax.com

Iron Maiden are planning to perform 'Senjutsu' in full for the "diehard fans". Frontman Bruce Dickinson has confirmed talks of the 2021 LP being played in its entirety live are true, and they will plot an intimate tour doing just that at a later date. Speaking to Fozzy's Chris Jericho...
MUSIC・1 DAY AGO
wvli927.com

Iron Maiden is looking to perform its entire Senjutsu album in its entirety. Senjutsu, which is Maiden's 17th studio set, was released last September and hit Number Three on the Billboard Top 200. Blabbermouth transcribed frontman Bruce Dickinson's recent chat on Chris Jericho's Talk Is Jericho podcast, in which he...
MUSIC・16 HOURS AGO

Iron Maiden will resume their 'Legacy of the Beast' tour later this year, but the metal legends are peering beyond these upcoming dates and may eventually perform their new record, Senjutsu, in it's entirety at a later time, as suggested recently by Bruce Dickinson. The 10-track, 82-minute album was released...
ROCK MUSIC・1 DAY AGO
thebrag.com

After teasing hints for a week, Daniel Johns has gifted Silverchair ‘Freak’s with the ultimate merch bundle for the single’s 25th anniversary. Available to pre-order this week only, the bundle contains a limited quantity, single-pressing hand-signed silver copy of Johns’ upcoming album FutureNever, featuring a cover image of teenage Johns illuminated by the ‘Freak’ lamps by artist Matt Ryan Tobin.
LIFESTYLE・7 DAYS AGO
Complex

WarnerMedia is going all out on The Batman promotion. Ahead of the film’s much-anticipated release, the entertainment giant has announced the largest collection of Batman film products in over 10 years. The lifestyle merch range is, of course, primarily inspired by the Caped Crusader, but also has nods to Selina Kyle, aka Catwoman; the penguin; the Riddler; and other iconic characters.
BEAUTY & FASHION・2 DAYS AGO
Revolver

Type O Negative — the Brooklyn goth-metal giants led by the late, great frontman Peter Steele — are one of the most iconic, beloved bands in heavy-music history. In celebration of the Drab Four's enduring legacy, Revolver has teamed with Type O for new, exclusive vinyl, magazines and apparel. These include limited-edition colored vinyl pressings of four classic albums: Slow, Deep and Hard on "clear with black swirl" Bloody Kisses on "clear red with black swirl" and "clear with green swirl," October Rust on "copper pearlescent swirl" and World Coming Down on "smoky gray swirl."
BROOKLYN, NY・3 DAYS AGO
ComicBook

There's a new Iron Fist kicking butt in the Marvel Universe, and Danny Rand gets an up-close view in an exclusive preview of Iron Fist #1. The series from writer Alyssa Wong and artist Michael YG introduces a new wielder of the Chi of Shou-Lao the Undying, and his identity is a secret... at least for now. Jim Cheung designed a new costume for Danny Rand's replacement, which so happens to borrow his familiar yellow mask to help keep his identity under wraps. Unlettered preview pages from Michael YG and colorist Jay Ramos find our mystery Iron Fist saving Danny from an army of attacking demons.
TV SERIES・3 DAYS AGO