Bayern Munich set to play in empty stadium over coronavirus 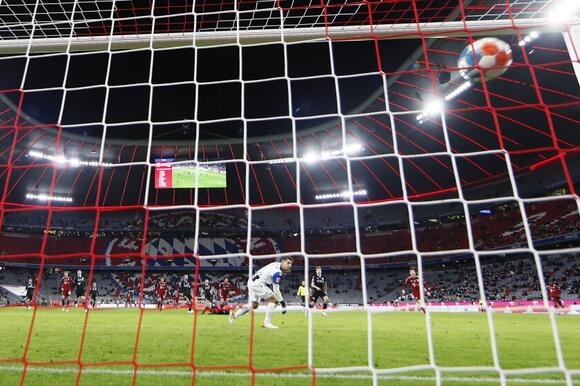 Bayern Munich will likely host Barcelona without spectators in the Champions League next week after the state governor said on Tuesday he will demand sports events in empty stadiums due to high coronavirus infection rates.

Bavaria governor Markus Söder said his state would block fans from attending games even if there isn't an agreement to do it nationwide, ahead of talks later Tuesday between Germany's states, outgoing Chancellor Angela Merkel and her designated successor, Olaf Scholz.

“It makes no sense to allow spectators again for the foreseeable future,” Söder told regional broadcaster Bayern 2. “If that doesn't work on the federal level, we will do it for Bavaria alone.”

Söder didn't give a timetable for his plan. Bayern's next home game is against Barcelona on Dec. 8, with a Bundesliga home game against Mainz three days later. The measure would also affect the other top-division men's soccer clubs in Bavaria, Augsburg and Greuther Fürth, and numerous teams in various sports.

Bayern was allowed a full house of 75,000 spectators in October but rising infection rates led to a cut to 25% capacity in Bavaria last week. Fans in the state are required to show a negative test for the coronavirus as well as either proof of vaccination or a recent recovery from the virus.

The Champions League game in Germany next week between Leipzig and Manchester City is already being played without spectators after the state of Saxony became the first to block fans this month. Saxony has the country's highest recent infection rates.

Bayern Munich firmly in the race to sign Denis Zakaria

The midfield department is set to be a key area for Bayern Munich in the summer transfer window. The Bavarian club has already parted ways with Mickael Cuisance, while Corentin Tolisso is also expected to leave in the summer on a free transfer. If Marc Roca doesn’t get a decent amount of playing time during Ruckrunde, then he might also look for a transfer. In such a scenario, Die Roten will need at least a couple of midfield acquisitions.
SOCCER・1 DAY AGO
Yardbarker

Chelsea are in the market for a new set of centre backs ahead of the coming summer, but will need to beat Bayern Munich and Barcelona to one of their targets. Juventus defender Matthijs de Ligt is the man reportedly on The Blues radar after he is said to have grown unhappy with life in Turin.
PREMIER LEAGUE・1 DAY AGO
Tribal Football

Bayern Munich move ahead of Man Utd for Zakaria

Bayern Munich have replaced Manchester United as favourites to sign Dennis Zakaria. The Swiss midfielder is set to leave Borussia Monchengladbach when his contract expires in the summer. United had been viewed as the favourites to sign Zakaria on a free transfer. But Sky Germany says the Premier League have...
PREMIER LEAGUE・16 HOURS AGO
FanSided

Robert Lewandowski was rewarded by FIFA on Monday for a successful 2021. The Polish striker was voted best player in the world during the annual FIFA BEST awards. The Bayern Munich striker managed to win this award for the second year in a row, further establishing the claim of being the best number nine in the world.
FIFA・2 DAYS AGO

Four of the FA WSL’s top five teams will contest the semi-finals of the Continental Cup with Manchester City, Manchester United, Tottenham and Chelsea all progressing.League leaders Arsenal were knocked out by third-placed Manchester United courtesy of Alessia Russo’s 85th-minute header.The impressive victory continued United’s fine form, meaning they have now won five games in a row in all competitions without conceding.Pernille Harder scored a hat-trick as Chelsea cruised to a 4-2 win over West Ham.The Denmark international opened the scoring for the visitors after 25 minutes only for Katerina Svitkova to equalise before half-time.However, three goals in nine second-half...
PREMIER LEAGUE・2 DAYS AGO
The Independent

Liverpool assistant manager Pep Lijnders believes many were ready to write the Reds’ Carabao Cup hopes off after last week’s goalless draw with Arsenal but he is backing his side to triumph in the semi-final’s second leg on Thursday night.Arsenal played for more than hour with 10 men at Anfield after the early dismissal of Granit Xhaka but nevertheless held Liverpool to a rare blank, and Mikel Arteta’s side will now hope to capitalise on home advantage in the second leg.Lijnders sensed a mood of pessimism around Anfield after the first match, but insisted he had been looking forward to...
PREMIER LEAGUE・2 DAYS AGO
San Diego Union-Tribune

Amongst top clubs in Europe, Bayern Munich is often known for doing astute business in the transfer market. The German club is not backed by a rich businessman or state, so they adopt a much more efficient approach to remain a challenge for trophies at the top level. The transfers...
SOCCER・2 DAYS AGO

LaLiga’s two biggest clubs were in the headlines recently as they fought out the first El Clasico of the new year in the Spanish Supercopa - an encounter Real Madrid just about edged, before going on to claim the trophy itself against Athletic Club.Now all three sides are back on our screens on Thursday night as the Copa del Rey takes centre stage, with the round of 16 ties pitting Barcelona against Athletic - a repeat of last season’s final, which Barca won 4-0. The current side looks rather different to the one which took to the field last April...
UEFA・1 DAY AGO
The Independent

Just like the hang time of his extraordinary lob against Scotland this summer, there have been moments this season when Patrik Schick feels as though he’s been walking amongst the clouds. It has been seven months since his halfway-line goal left Hampden Park suspended in equal parts amazement and anguish, but that day still remains the starting point of another outlandish trajectory.It might have been a little overshadowed by the twin auras of Robert Lewandowski and Erling Haaland, but since finishing as the Euros’ joint-top scorer, Schick has quietly transformed himself into one of the continent’s most formidable strikers. Last...
FIFA・1 DAY AGO
Tribal Football

Barcelona fuming over Bayern Munich tapping up Pedri and Dest

Barcelona are angry with Bayern Munich's attempts for Pedri. The midfielder is a target for the German giants and Barca are fuming after learning of Bayern making contact with the youngster. Sport1 says the management team around Barcelona president Joan Laporta is "increasingly irritated" by Bayern's transfer market behavior. The...
SOCCER・1 DAY AGO
San Diego Union-Tribune

A match that finally took place, but there was no actual contest. Arsenal, it could be argued, still didn’t really play.Liverpool reached a fifth cup final of Jurgen Klopp’s time, and the first in this competition in six years, by comfortably beating Mikel Arteta’s side 2-0 in the League Cup semi-final second leg. This one wasn’t about false positives but false advertising. It just wasn’t the game that was billed, and certainly didn’t live up the enjoyable chaos that the competition’s semi-finals often offer.Arteta’s side clearly have so much promise but also some way to go, as they lost another...
PREMIER LEAGUE・1 DAY AGO
The Independent

Liverpool midfielder Alex Oxlade-Chamberlain will miss Thursday’s Carabao Cup semi-final second leg against Arsenal but his ankle injury is not serious, assistant manager Pepijn Lijnders has said.The 28-year-old was forced off in the second half of Saturday’s 3-0 Premier League victory over Brentford at Anfield, soon after scoring the Reds’ second goal.The problem rules him out of this week’s return to his former club Arsenal, but the club are hopeful he could be back in action for this weekend’s trip to Crystal Palace.Lijnders told the club’s website, www.liverpoolfc.com: “I spoke yesterday with him and he thinks it’s not that...
PREMIER LEAGUE・2 DAYS AGO
The Independent

Cristiano Ronaldo is a doubt for Manchester United’s match against West Ham due to a neck complaint.Having missed two matches with a hip flexor issue, the 36-year-old frontman returned in Wednesday’s 3-1 Premier League win at Brentford.Ronaldo made headlines with his reaction to being taken off in the second half by interim boss Ralf Rangnick who has revealed the forward might be absent entirely on Saturday.“Cristiano is a question mark because he has a problem with his neck,” he told MUTV.“He received treatment yesterday for two or three hours and we will have to wait to see how he...
PREMIER LEAGUE・3 HOURS AGO
San Diego Union-Tribune

Cristiano Ronaldo could miss Manchester United’s home match against West Ham on Saturday with a neck injury, manager Ralf Rangnick has revealed. Ronaldo was brought off by Rangnick at the end of United’s 3-1 win over Brentford in midweek, something he was quite upset about, and United report it was during the game that he sustained the knock. “Cristiano is a question mark [to play West Ham] because he has a problem with his neck,” Rangnick told MUTV on Friday. “He received treatment yesterday for two to three hours and we will have to wait to see how he feels...
PREMIER LEAGUE・9 HOURS AGO
The Independent

Pep Guardiola insists he will not “betray” Manchester City when he comes to decide on his long-term future.The much-decorated City manager, who turned 51 earlier this week, is contracted at the Etihad Stadium until the end of next season.As it did prior to Guardiola signing his last two extensions, speculation over his future is likely to increase as the deal runs down.They gave me everything, so I cannot betray them or do anything wrong to themPep GuardiolaYet the Spaniard is not looking that far ahead yet, is relaxed about the situation and, when he eventually does decide to move on,...
PREMIER LEAGUE・3 HOURS AGO
San Diego Union-Tribune