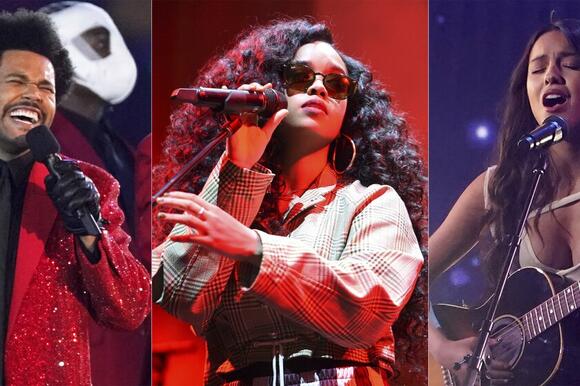 Olivia Rodrigo, H.E.R and The Weeknd have all won honors at a revamped Apple Music Awards, which has grown larger to encompass global music patterns.

"I am very honored and blessed to receive this recognition,” H.E.R. said in a statement. “As a young Black and Filipino artist, and a woman who is on the stage giving my all, there’s no doubt that representation is important."

The Weeknd thanked Apple for the honor and being supportive "not only for my work but also for great music by newer artists where it matters so much for creators to be found and supported.”

The winners are Aya Nakamura for the French region, OFFICIAL HIGE DANDism for Japan, RIN for Germany, Scriptonite for Russia and Wizkid for Africa.

"We’re thrilled to honor the artists that are shaping culture and connecting with fans around the world on Apple Music,” said Oliver Schusser, Apple’s vice president of Apple Music and Beats. “This year we’re also recognizing more regional artists, showing the world the impact of extraordinary talented musicians who are making waves globally.”

The service said winners are chosen through a process that reflects both Apple Music’s editorial perspective and what customers around the world are listening to the most.

Mark Kennedy is at http://twitter.com/KennedyTwits

Olivia Rodrigo celebrated the one year anniversary of her record-breaking debut “Drivers License” on Saturday with a sweet post noting how it changed her life!
MUSIC・8 DAYS AGO
hot96.com

David Guetta sweetly shouts out Olivia Rodrigo: “I love that we keep inspiring each other”

Olivia Rodrigo recently celebrated the first anniversary of her debut single “drivers license,” but it appears she had a fan well before she took over the radio. DJ David Guetta shared on Monday an adorable throwback of a young Olivia belting out his 2011 Sia collab, “Titanium,” and marveled over how far she’s come since that moment.
CELEBRITIES・7 DAYS AGO
Complex

Drake, Olivia Rodrigo, Pop Smoke, Adele, and More Among the Highest-Selling and Streaming Artists of 2021

As we enter 2022, MRC Data (f.k.a. Nielsen) has unveiled its end-of-year numbers to show us who controlled 2021 in terms of streams and sales. As highlighted by Billboard, Morgan Wallen had the highest-selling album of the year by equivalent album units with Dangerous: The Double Album, moving 3.23 million. Following him is Olivia Rodrigo’s Sour doing 2.8 million units, and Drake’s Certified Lover Boy moving 1.9 million. Rounding out the top five for the year are Adele’s 30 and Pop Smoke’s Shoot for the Stars Aim for the Moon, which is impressive considering it came out back in July 2020.
MUSIC・11 DAYS AGO
udiscovermusic.com

Adele, Morgan Wallen, Justin Bieber, Drake, Olivia Rodrigo and Dua Lipa topped MRC Data’s 2021 Canada year-end report in a year when the nation saw on-demand streams hitting an all-time high as total album consumption was up almost 10% and vinyl sales ticked up more than 21%. As was...
CELEBRITIES・12 DAYS AGO

A record year for audio on-demand streams in the U.S. and a new milestone for vinyl sales are two of the top talking points in MRC Data’s 2021 year-end report, issued this morning by the industry’s leading tracking service, but the continued swell in catalog streams and sales — i.e. recordings older than 18 months — is another notable metric in the report, with that category accounting for more than 74% of music consumption during the year.
MUSIC・12 DAYS AGO
hot1061.com

How has it been 1 year since Olivia Rodrigo blessed us with ‘drivers license’?

Billboard has issued a report stating that Olivia Rodrigo was the queen of Australia’s charts, while Glass Animals also experienced their best year yet. Rodrigo enjoyed a massive breakthrough last year with a string of hit singles and her debut full-length album, Sour. Based on new data published by...
WORLD・5 DAYS AGO
Complex

Olivia Rodrigo Celebrates “Drivers License” One Year After Its Release

2021 was a banner year for Olivia Rodrigo—and it was thanks in large part to her breakout single “Drivers License.”. On Saturday, the 18-year-old singer/actress celebrated the song’s first anniversary by hosting an online viewing party for its official video. The Matthew Dillon Cohen-directed visual finds Rodrigo driving aimlessly around as she reflects on a past love. The video has since racked in more than 331 million YouTube views, and secured a Favorite Music Video nomination at the 2021 American Music Awards.
CELEBRITIES・9 DAYS AGO

Did Olivia Rodrigo break up with Adam Faze? Singer hints at split in interview

Fans are convinced that Driver’s License singer Olivia Rodrigo has parted ways with boyfriend Adam Faze, and a recent interview with British Vogue is only further fueling the flames. In July 2021, 18-year-old Olivia Rodrigo all but confirmed that she was dating 24-year-old producer Adam Faze after the two...
CELEBRITIES・14 DAYS AGO
illinoisnewsnow.com

One year ago Saturday, back on January 8, 2021, a 17-year-old Disney star named Olivia Rodrigo released a song called “drivers license” — and then proceeded to utterly dominate the pop music world for the rest of the year. “It was just crazy. Like, my entire life...
MUSIC・11 DAYS AGO
iHeartRadio

Joshua Bassett unfollowed Olivia Rodrigo shortly before they return to the 'High School Musical: The Musical: The Series' set.
CELEBRITIES・12 DAYS AGO
edm.com

Watch: David Guetta Shares Clip of Olivia Rodrigo Singing "Titanium" When She Was Only 10

David Guetta took to social media to share a wholesome clip of Olivia Rodrigo, who—years before she got her driver's license—belted out his and Sia's classic dance hit "Titanium" at only 10. The track, which was released on Guetta's Nothing but the Beat album, took over the radio...
MUSIC・4 DAYS AGO

Y2K is here to stay. From TikTok to runways and red carpets, the appetite for early 2000s aesthetics doesn’t seem to be going anywhere anytime soon. As Clayton Hawkins, a celebrity hairstylist and Tangle Teezer stylist ambassador, predicts: “The early 2000s revival will be bigger than ever in 2022. People are loving all the buns, braids and crimped textures from the era because they’re joyful—and we all need a little magic these days.”
HAIR CARE・13 DAYS AGO
Billboard

Last month Olivia Rodrigo was celebrating her first tour selling out. This month, she’s celebrating her breakthrough single, “Drivers License,” turning one. “happy first birthday to the little song that changed my whole life,” she wrote on Instagram on Saturday (Jan. 8). “I made this video a day or two after I wrote drivers license in my living room (with a very squeaky sustain pedal lol). crazy to think how quickly life changes.”
MUSIC・9 DAYS AGO
mix929.com

Olivia Rodrigo may be a global pop superstar who’s prepping for her first-ever headlining tour, but she hasn’t forgotten her roots: Production started in Los Angeles today on the show that really got her musical career going. Production on the third season of the Disney+ show High School...
LOS ANGELES, CA・1 HOUR AGO
E! News

Boy band CNCO exclusively revealed during E! News' Daily Pop on Jan. 14 that they have new music on the way—and are ready to collaborate with some huge names. "We love the new sound. It's different," Zabdiel de Jesus teased of their latest single, "Party, Humo y Alcohol." Christopher...
MUSIC・3 DAYS AGO

Gunna Sneaks Past the Weeknd in a Photo Finish to Land at No. 1 on Album Chart

Things took an unpredictable turn at the top of the Billboard charts this week as Gunna’s new album unexpectedly slipped past the Weeknd’s, albeit in a photo finish that had the rapper pull ahead of the superstar competition by the tiniest of margins. The Weeknd’s “Dawn FM” debuted with 148,000 album-equivalent units, almost but not quite a match for the 150,300 units registered by Gunna’s “DS4Ever,” Billboard revealed late Monday. Although the Weeknd is the bigger mainstream name, these two albums actually came into the race evenly matched in many ways. Both  were released Jan. 7 — in what is, ironically, usually...
CELEBRITIES・17 HOURS AGO
hypebeast.com

The Weeknd kicked off 2022 with a bang as his fifth studio album Dawn FM has now been finally released to the public. And after teasing multiple trailers leading up to the launch day, the Toronto-born crooner has also accompanied the drop with his first visual for “Sacrifice” — track number five off of the new record.
THEATER & DANCE・10 DAYS AGO
hot969boston.com

If you were like Melissa and stayed up ’til midnight last night to watch The Weeknd’s listening party, you already know how brilliant of an album “Dawn FM” is. Set in the appearance of an actual radio station, Dawn FM takes you on a journey from the club, back to the 80’s and beyond. Stream it now on all platforms.
MUSIC・11 DAYS AGO
coast1045.com

The Weeknd unveils the music video for ‘Gasoline’

The Weeknd has released the official video for “Gasoline,” the second track off his most recent album, Dawn FM. Directed by Matilda Finn, the eccentric “Gasoline” video features The Weeknd portraying his character off the cover of Dawn FM—an old version of himself. The Weeknd...
CELEBRITIES・5 DAYS AGO