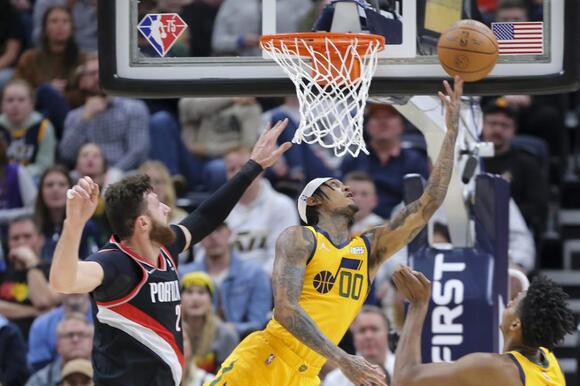 Donovan Mitchell scored 30 points and Rudy Gobert amassed 21 points and 16 rebounds to lead the Utah Jazz to a 129-107 victory over the Portland Trail Blazers on Monday night in Salt Lake City.

Sixth Man of the Year Jordan Clarkson added 22 points, six rebounds and three assists off the bench as the Jazz won for the sixth time in eight outings. Joe Ingles and Rudy Gay each scored 14 points.

Damian Lillard, who played his college ball at nearby Weber State, was limited to 11 points on 4-for-12 shooting as the Blazers lost their third straight game.

Jusuf Nurkic tallied a double-double of 24 points and 10 boards, Anfernee Simons scored 24 off the bench and C.J. McCollum added 19 points for the struggling visitors.

The Jazz offense clicked for the second straight game, especially in the second half when it outscored Portland 76-58. Utah shot 52.8 percent overall, 41.3 percent from 3-point range and dished out 30 assists.

Utah seized control for good in the third quarter, opening the half on a 10-1 run, which started with back-to-back 3s by Mitchell.

Later in the period, Gay hit a pair beyond the arc to key an 8-0 run that put the Jazz up by their largest margin, 83-61. That was part of a stretch in which Utah made baskets on nine consecutive possessions. 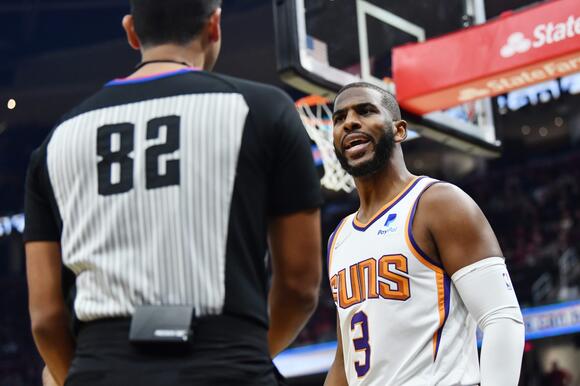 Similar to the second quarter, Portland pushed back to erase more than half of the Jazz’s lead, pulling within 94-84 thanks to a buzzer-beating 3 by Tony Snell.

That was as close as the Blazers were able to get, and the Jazz steadily built their lead back up to 22 thanks to a late 8-2 run that put the game away.

Sparked by their two Rudys, the Jazz used a 12-2 run early in the second quarter to go ahead 34-27. They then led 52-42 after a Mitchell bucket with 1:25 remaining in the half, but Nurkic hit a 3-pointer and a layup to help the Blazers go into the break behind by just four, 53-49.

Gobert finished that half with 12 points and 10 rebounds.

The Portland Trail Blazers and Orlando Magic have announced their starting lineups for Monday's game in Florida.
NBA・10 HOURS AGO
NBC Sports

WASHINGTON -- The Washington Wizards lost to the Portland Trail Blazers 115-110 on Saturday night at Capital One Arena. Here are five observations from what went down... The Blazers were missing Damian Lillard and C.J. McCollum, their two best players, and the Wizards had won three straight games. Though they were without Bradley Beal, the Wizards had a prime opportunity to make it four in a row on Saturday night, playing at home against a bad team.
NBA・2 DAYS AGO
Reuters

SALT LAKE CITY – Jazz guard Donovan Mitchell swatted a shot attempt by LeBron James during Utah’s game against the Los Angeles Lakers. The Lakers hosted the Jazz at Crypto.com Arena on Monday, January 17. With 10:39 left in the opening quarter, James drove to the hoop for...
NBA・6 HOURS AGO
Blazer's Edge

Portland Trail Blazers (16-25) vs Washington Wizards (22-20) The Portland Trail Blazers take on the Washington Wizards at Capital One Arena in the second game of a six game road trip. The Blazers are coming off of a blowout loss to the Denver Nuggets dropping them to 2-14 on the road for the season. The Wizards come into this matchup winners of three straight over the Orlando Magic twice and the Oklahoma City Thunder, and the Wizards are looking to continue their winning streak against another struggling team.
NBA・2 DAYS AGO
Sportsnaut

Jusuf Nurkic had 21 points and a season-high 22 rebounds, CJ McCollum scored 16 points in a successful return to
NBA・7 HOURS AGO
The Oregonian

Anfernee Simons and CJ McCollum will start in the backcourt for the Portland Trail Blazers Monday at the Orlando Magic. The return of McCollum from a collapsed lung to go along with the elite play lately from Simons should give the Blazers close to the level of guard play they experienced with Damian Lillard in the lineup.
NBA・1 DAY AGO

Russell Westbrook gets nasty early and Stanley Johnson delivers late as the Lakers earn a 101-95 win over the Utah Jazz on Monday at Crypto.com Arena.
NBA・4 HOURS AGO
ClutchPoints

Detroit Pistons legend Isiah Thomas recently speculated about what it would be like if star players from today’s NBA were inserted into the league in the 1980s and 1990s. Thomas explained that players like Los Angeles Lakers superstar LeBron James and Brooklyn Nets superstar Kevin Durant would pose massive issues for anyone hoping to stop them in that era.
NBA・2 DAYS AGO
FastBreak on FanNation

Steph Curry has been ruled out for Sunday's game between the Golden State Warriors and Minnesota Timberwolves.
NBA・2 DAYS AGO

The Brooklyn Nets have barely had their “Big Three” on the floor together since they assembled what they thought would be a championship roster, and one of their superstar players is reportedly open to the idea of moving on. NBA reporter Marc Stein wrote on Monday that sources...
NBA・10 HOURS AGO
FastBreak on FanNation

Kyle Kuzma threw down a huge dunk on Joel Embiid during the game between the Philadelphia 76ers and Washington Wizards on Monday afternoon.
NBA・13 HOURS AGO
Sportsnaut

The Los Angeles Lakers were a hot destination in free agency. Over the summer, multiple players flocked to the team to chase a title alongside LeBron James in the NBA's biggest market. But since the start of the season, things have been less than ideal for the Lakeshow. Through the...
NBA・2 DAYS AGO

Rajon Rondo has been ruled out for the game between the Cleveland Cavaliers and Oklahoma City Thunder on Saturday night.
NBA・2 DAYS AGO
FastBreak on FanNation

Cade Cunningham was ejected during the game between the Phoenix Suns and Detroit Pistons on Sunday afternoon in Michigan.
NBA・1 DAY AGO
FastBreak on FanNation

DeMar DeRozan seemed poised for another miracle with the final handful of seconds ticking off the clock in Boston on Saturday night. DeRozan already had scored 14 points in the fourth quarter to lead a short-handed Chicago Bulls team within punching distance of the Celtics. He already had dished a pass to Nikola Vučević for a wide-open 3-pointer to take the lead, then launched himself inside ...
NBA・2 DAYS AGO