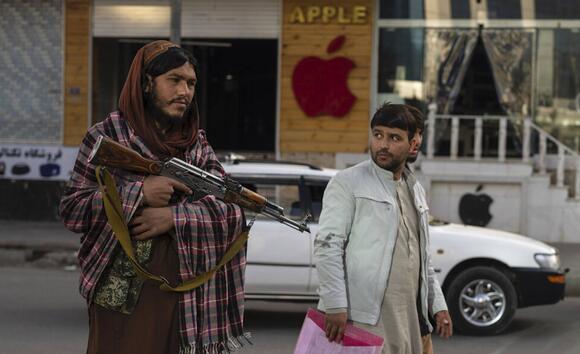 Taliban forces in Afghanistan are responsible for the death or disappearance of more than 100 former police and intelligence officers, according to a report from Human Rights Watch.

The report , released on Tuesday, documents the killing or vanishing of 45 former Afghan National Security Forces soldiers who had surrendered to or were apprehended by the Taliban between Aug. 15, when they rose to power, and Oct. 31. In all, the group “gathered credible information on more than 100 killings from” four provinces, according to a statement.

These incidents occurred in Ghazni, Helmand, Kandahar, and Kunduz provinces.

“The Taliban leadership’s promised amnesty has not stopped local commanders from summarily executing or disappearing former Afghan security force members,” said Patricia Gossman, associate Asia director at Human Rights Watch. “The burden is on the Taliban to prevent further killings, hold those responsible to account, and compensate the victims’ families.”

“The Taliban’s unsupported claims that they will act to prevent abuses and hold abusers to account appears, so far, to be nothing more than a public relations stunt,” Gossman continued. “The lack of accountability makes clear the need for continued UN scrutiny of Afghanistan’s human rights situation, including robust monitoring, investigations, and public reporting.”

The Human Rights Watch detailed its findings to the Taliban on Nov. 7. The government responded by saying the detentions were not for “past deeds, but [because] they are engaged in new criminal activities … [and] create problems and plots against the new administration, [and] keep contacts with notorious individuals who fled the country … It is not our policy to kill someone without trial, whether he is from ISIS or from another group.”

The report also alleged the Taliban are increasing their searches for former members of the Khost Protection Force, a special forces unit originally created to help the U.S.’s Central Intelligence Agency. A source told the watchdog that “the KPF are the [Taliban’s] first target. The bare looking for them.”

The Taliban have been able to find and access former government employment records, according to the nonprofit group, which also noted that a former member of the National Directorate of Security, the former state intelligence agency, Baz Mohammad, was “arrested,” though “relatives later found his body.”

The situation in Afghanistan is tumultuous for the United States, which left the country months ago after spending just about two decades there. Taliban fighters were able to overthrow the Ghani government and the Afghan military despite training and equipment from the U.S.

Additionally, the U.S. and many other Western allies have called on the Taliban not to reverse the standard of living gains achieved for women over the course of the war in Afghanistan and have used the possibility of international recognition as a motivator.

While the U.S. backed the previous government, it's still relying on the Taliban to ensure that terror groups, specifically the Islamic State Khorasan, an enemy of the Taliban, are not able to have a safe haven in the country.

“We want the Taliban to succeed against ISIS-K,” State Department Special Representative Thomas West told reporters earlier this month. “When it comes to other groups, look, al Qaeda continues to have a presence in Afghanistan that we are very concerned about, and that is an issue of ongoing concern for us in our dialogue with the Taliban.”

Special Representative Deborah Lyons told the U.N. Security Council earlier this month that ISIS-K was now present in " nearly all provinces " of Afghanistan "and [is] increasingly active."

U.S. officials have warned that ISIS-K and other terror groups could gain the capability to attack the U.S. or other countries in a span ranging from a matter of months to years.

Dr. Colin H. Kahl, the undersecretary of defense for policy, told the Senate Armed Services Committee last month that ISIS-K could "generate that capability in somewhere between six or 12 months, according to current assessments by the intelligence committee," adding, "And for al Qaeda, it would take a year or two to reconstitute that capability."

A son of the Taliban’s founder and an Afghan deputy prime minister have traveled to Moscow in recent days for clandestine talks, former Afghanistan security executives told the Washington Examiner.
WORLD・5 HOURS AGO
WashingtonExaminer

A sheriff's sergeant in Texas was killed Monday in a hit-and-run during an off-duty motorcycle escort in Harris County, Texas, the Sheriff's Office announced.
HARRIS COUNTY, TX・13 HOURS AGO
WashingtonExaminer

A stowaway was found alive on Sunday in a wheel well in the nose of a cargo plane that flew 11 hours from Johannesburg, South Africa, to Amsterdam, in the Netherlands, Dutch police confirmed.
PUBLIC SAFETY・15 HOURS AGO
AFP

Talks in Oslo Sunday between the Taliban and Afghan civil society members served as an "icebreaker", on the eve of their meeting with Western diplomats to discuss human rights and the humanitarian crisis in Afghanistan, an Afghan participant said. Thomas West, the US special representative for Afghanistan, tweeted on Sunday: "As we seek to address humanitarian crisis together with allies, partners, and relief orgs, we will continue clear-eyed diplomacy with the Taliban regarding our concerns and our abiding interest in a stable, rights-respecting and inclusive Afghanistan."
WORLD・1 DAY AGO

‘The Taliban hate us’: a former senior female police officer

*Fahima was the most senior policewoman in her province. Since the Taliban took over, women who worked in the police force have been targeted for assassination and beatings. She believes Taliban officials are particularly focused on tracking her down because of both her seniority and her role recruiting other women.
PUBLIC SAFETY・4 DAYS AGO
Business Insider

"I am lost. I have lost my motivation and energy I had before," Sajida told the Washington Post. "Now, I just think of peace and security."
MIDDLE EAST・5 DAYS AGO
atlantanews.net

Pak responsible for the mess in Afghanistan

Islamabad [Pakistan], January 19 (ANI): Pakistan is primarily responsible for the mess in Afghanistan and until and unless Afghanistan is freed from the malign influence and interference of Pakistan, even the best-intentioned aid and relief program will fail, reported Times of Israel. Ever since the Taliban took over Afghanistan, the...
CHINA・5 DAYS AGO
Laredo Morning Times

Afghanistan desperately needs aid. One technocrat from the former government is key to the Taliban's efforts.

KABUL, Afghanistan - Twenty years ago, Nazir Kabiri earned a master's degree in economics on a Fulbright scholarship in Kentucky. Later, he founded an Afghan think tank that promoted critical thinking and public participation in national issues. For much of the past decade, he was a senior finance official in the civilian-led government of President Ashraf Ghani.
WORLD・6 DAYS AGO

US announces more than $300M in Afghanistan aid amid winter disasters

The Biden administration is providing more than $308 million in additional humanitarian assistance to Afghans facing food and water shortages, economic collapse and other issues exacerbated by the COVID-19 pandemic, Taliban rule and the harsh winter. The latest contribution brings the total amount of assistance from Washington to Afghanistan and...
U.S. POLITICS・13 DAYS AGO
AFP

Homayoun Sakhi closes his eyes and runs his fingers along the long neck of his wooden instrument encrusted with mother-of-pearl. "I feel like I have my Afghanistan in my hand," says Sakhi, one of the world's most renowned performers on the country's national instrument, the rubab. He is jet-lagged after flying in from California to perform at London's Barbican concert hall to raise funds for emergency medicine and education in his homeland. Along with the growing humanitarian crisis, Afghanistan's rich musical culture is under threat as the Taliban have banned music since their return to power last year.
WORLD・33 MINUTES AGO
WBOY 12 News

A police officer was killed and two others injured in a shootout with Pakistan's Taliban in Islamabad, officials said Tuesday, a rare attack by the militants in the heavily guarded capital. "A policeman was martyred while two others were wounded," the police said in a statement, adding that both attackers were killed.
PUBLIC SAFETY・6 DAYS AGO
The Guardian

A German court has sentenced a Syrian former intelligence officer to life in prison in a case the UN rights chief said could lead to accountability for other perpetrators of the war’s “unspeakable crimes”. Anwar Raslan, a former colonel loyal to the regime who later defected and...
WORLD・11 DAYS AGO
The Guardian

As Fulton County District Attorney Fani Willis requests a special grand jury to aid her investigation into Donald Trump's alleged election interference, the controversy clearly has the former president's attention. I can say this with confidence because Trump, who said very little about the matter for months, suddenly can't stop talking about it.
GEORGIA STATE・14 HOURS AGO
Business Insider

The exercise is the first time NATO has commanded a full US carrier strike group since the Cold War, the alliance said.
MILITARY・12 HOURS AGO
MarketWatch

In the ongoing conflict between Russia and Ukraine, Russian President Vladimir Putin’s eyes are on a bigger prize, a top expert on Putin and his country says. “This time,” writes former intelligence officer Fiona Hill in a New York Times op-ed, “Mr. Putin’s aim is bigger than closing NATO’s ‘open door’ to Ukraine and taking more territory — he wants to evict the United States from Europe. As he might put it: ‘Goodbye America. Don’t let the door hit you on the way out.’ ”
POLITICS・13 HOURS AGO