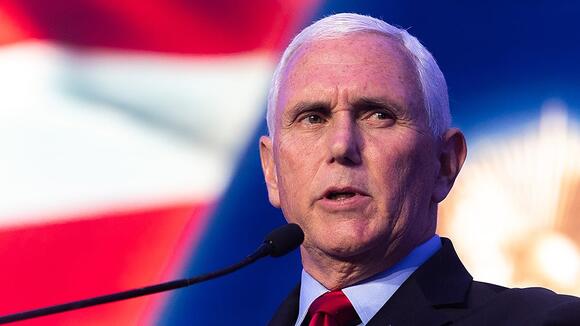 Former Vice President Mike Pence on Tuesday will lay out the case for reversing the precedent set by Roe v. Wade on the eve of Supreme Court arguments over a Mississippi law that bans abortions after 15 weeks of pregnancy.

In remarks at the National Press Club, obtained in advance by The Hill, Pence will call the high court's decision on Roe, which protected a woman's right to have an abortion, a "misguided" ruling that has unfairly harmed millions of unborn children and triggered a ripple effect of consequences across the country.

"We are asking the Court, in no uncertain terms, to make history," Pence will say, according to prepared remarks. "We are asking the Supreme Court of the United States to overturn Roe v. Wade and restore the sanctity of human life to the center of American law."

Pence will call the court's 1973 ruling on Roe a "misguided decision" that has "inflicted a tragedy not only on our nation, but on humanity, that is hard to fathom."

The former vice president will argue U.S. policies on abortion are out of touch with the mainstream, pointing to European countries like France and Spain that have restrictions on the procedure after 14 weeks, with some exceptions.

Pence will also argue abortion laws written by elected representatives at the state level are more reflective of the public's view than court rulings by "unelected judges."

"When the Supreme Court overturns Roe v. Wade — and I believe with all my heart that day will come, either now or in the near future — it will not come as a surprise to anyone," Pence will say Tuesday. "It will simply be the culmination of a 50-year journey whose course and destination have been set by the will of the American people."

The Mississippi case is being closely watched by conservatives, who have for decades rallied support for overturning Roe v. Wade, and by liberals, who have feared since former President Trump appointed three justices to the court that a woman's right to an abortion was in danger.

Under current precedent, states may regulate abortion up to the point of fetal viability, typically around 23 weeks, so long as the restriction does not pose an "undue burden" on abortion access. Mississippi’s law, which bans abortion after 15 weeks of pregnancy and makes exceptions only for medical emergencies or “severe fetal abnormality,” is a clear-cut violation of this framework, critics say.

The state's Republican attorney general, in a court brief filed over the summer, explicitly urged the justices to overrule Roe and related rulings, calling the court’s precedent on abortion “egregiously wrong.”

Pence will appear on Tuesday alongside Marjorie Dannenfelser, the president of the Susan B. Anthony List, an anti-abortion group, for a talk after the address.

The former vice president has been staunchly anti-abortion throughout his career. He is expected to highlight Trump administration policies that restricted funding for abortion during his time as vice president, as well as measures he enacted while governor of Indiana that limited access to the procedure.

Tuesday's speech is Pence's latest stop on a speaking circuit that has kept him in the public eye touting conservative causes amid speculation about a potential 2024 presidential bid. Pence has appeared in Iowa and South Carolina and next week will headline a conservative event in New Hampshire focused on attacking President Biden 's economic agenda.

there are 380,000 churches in the United States. at last count there was 443,000 orphaned children in the United stated. so until they want to start adopting these unwanted kids, they need to stay out of a woman's uterus. it is a medical decision between a woman and her doctor. politicians and judges have no place in decisions for medical conditions. pregnancy IS a medical decision.

Ok...I use to like Pence, but he is walking down the wrong road. I am a conservative, but the whole abortion issue should be left to the ladies.

Pence never left the 50's when back alley coat hanger abortions were the nor.If Roe vs Wade is overturned it will start awhile new industry for people to make money performing illegal abortions that will kill more babies and women plus lead to a burden on the medical community treating infections etc.

The court’s move comes less than a week after the justices issued a split decision on another set of Biden administration pandemic mitigation measures.
CONGRESS & COURTS・22 HOURS AGO
The Independent

Starbucks has revoked its Covid vaccine mandate for employees, the company says.In a company memo, Starbucks CEO John Culver cited a recent Supreme Court decision rejecting the Biden administration’s call for all companies with over 100 employees to enforce a vaccine mandate.“We respect the court’s ruling and will comply,” Mr Culver wrote on Tuesday.Starbucks, which employs 228,000 Americans, unveiled its mandate less than three weeks ago. On 3 January, the company announced that all its employees must provide proof of vaccination or face weekly Covid testing.“We strongly encourage all US partners to get fully vaccinated by Feb 9,” Mr...
CONGRESS & COURTS・3 HOURS AGO
MSNBC

Money is the lifeblood of our often-poisonous political system. Our nation’s highest court has allowed an increasing amount of such blood to pump freely throughout our body politic. The Supreme Court is now considering when and how candidates can raise money after elections to give themselves infusions. Money is...
CONGRESS & COURTS・5 HOURS AGO

The Atlanta City Council has added its voice in support of abortion rights as the U.S. Supreme Court considers a demand from Mississippi that justices reverse Roe v. Wade. The council approved a resolution that endorses “the fundamental right to abortion.” The paper calls on the Georgia Legislature to protect abortion rights and also provide family planning and maternal care.
ATLANTA, GA・3 HOURS AGO
KVUE

AUSTIN, Texas — On Monday, the U.S. Court of Appeals for the Fifth Circuit certified a challenge filed by statewide abortion providers to the Texas Supreme Court. It's another move that's expected to significantly delay the case that has been in the courts since September 2021, when the Texas law went into effect, allowing anyone to sue a patient or provider who participates in an abortion procedure after around six weeks, which is when a heartbeat can be detected.
AUSTIN, TX・1 DAY AGO
Palm Beach Daily News

The Supreme Court deterred the federal government from mandating vaccines for employees of large companies. In spite of 800,000 deaths from COVID-19, and the resistance of the belligerently stupid to get vaccinated, why is that a positive development? It should establish that the government does not have control over our bodies. If the court is consistent, it cannot take the right to give birth or not to give birth from women. It cannot say that you don’t have the right to smoke a joint in your own living room. And it should not interfere in the most important right we have as humans, the right to determine when and how we die. If it is not consistent in these matters, we need a constitutional amendment to ensure these rights.
BOYNTON BEACH, FL・1 DAY AGO
POLITICO

Were the Supreme Court's Decisions on Vaccine Mandates Correct? | Opinion

The Supreme Court made clear in its two decisions that Congress, for better or worse, is the appropriate institution for making decisions regarding vaccine mandates.
CONGRESS & COURTS・2 DAYS AGO
WKBN

Texas' ban on most abortions is likely to stay in effect for the foreseeable future after a federal appeals court ruling.
AUSTIN, TX・1 DAY AGO
AOL Corp

A 'dagger in the heart' of Biden's COVID-19 vaccination campaign? Biden has options after Supreme Court ruling

WASHINGTON – The Supreme Court’s rejection Thursday of a federal vaccination requirement for most workers stripped away President Joe Biden's most effective tool in increasing vaccination rates, which experts said are nowhere close to what's needed for a return to normalcy. Biden has made vaccines the centerpiece of...
WASHINGTON STATE・2 DAYS AGO
Washington Times

The U.S. Supreme Court, in a moment of supreme lucidity, slapped down Joe Biden’s presidential attempt to use a federal agency to bend private companies’ to his executive will — that is, to use OSHA as a COVID-19 vaccine mandate enforcer for millions of privately employed Americans.
CONGRESS & COURTS・4 DAYS AGO

(WASHINGTON) -- While the U.S. Supreme Court considers a case that could potentially overturn Roe v. Wade, some states are enacting or discussing protections for reproductive rights. This week, New Jersey Gov. Phil Murphy signed a bill that codifies the right to an abortion, previously recognized by the state Supreme...
CONGRESS & COURTS・4 DAYS AGO
Metro News

Just a day into the annual legislative session, West Virginia lawmakers started moving a bill that would ban abortions at 15 weeks, just like a Mississippi law under review by the U.S. Supreme Court. “This bill is very similar to the Mississippi law. In fact, I think it almost mirrors...
CONGRESS & COURTS・6 DAYS AGO
The Atlantic

Much will be said about the implications of yesterday’s Supreme Court decision effectively blocking the Biden administration’s COVID-vaccine mandate for the 84 million workers affected, not to mention their families, and anyone they come in contact with. But as a matter of constitutional law, Justice Neil Gorsuch nailed the crucial issue in the opening line of his concurring opinion: “The central question we face today is: Who decides?”
CONGRESS & COURTS・5 DAYS AGO
wbap.com

(WBAP/KLIF) — The highest court in the land delivers a split decision for President Biden. Many business owners in the Metroplex breathed a sigh of relief after the Supreme Court struck down the President’s vaccine mandate, Thursday. Constitutional lawyer David Coale spells out the basic principle of what...
FORT WORTH, TX・5 DAYS AGO

WASHINGTON — The Supreme Court has stopped the Biden administration from enforcing a requirement that employees at large businesses be vaccinated against COVID-19 or undergo weekly testing and wear a mask on the job. At the same time, the court is allowing the administration to proceed with a vaccine...
CONGRESS & COURTS・5 DAYS AGO
phillyvoice.com

New Jersey has guaranteed residents will retain the right to an abortion regardless of whether the U.S. Supreme Court rolls back reproductive rights. ]Gov. Phil Murphy enshrined abortion rights into state law by signing the Freedom of Reproductive Choice Act in Teaneck on Thursday. If the Supreme Court weakens overrules...
U.S. POLITICS・6 DAYS AGO
Mother Jones

Fight disinformation. Get a daily recap of the facts that matter. Sign up for the free Mother Jones newsletter. As a surge in omicron variant cases of Covid spurs a record high number of new infections and a rise in hospitalizations, including among children, the Supreme Court is set to decide on whether the Biden administration’s workplace vaccine mandates announced in the fall can go into effect. On Friday, the justices will hear arguments in cases challenging two vaccine policies the administration proposed: one that requires businesses with 100 or more employees to ensure their workers are fully vaccinated or get tested on a weekly basis; the other that mandates full vaccination for health care workers at federally-funded facilities. These measures would cover an estimated 100 million workers.
CONGRESS & COURTS・12 DAYS AGO
kiwaradio.com

Statewide Iowa — Republican legislative leaders and Governor Kim Reynolds say the state should wait for a U.S. Supreme Court ruling on federal Covid-19 vaccination mandates before considering state action on the issue. The governor, though, predicts the Supreme Court will rule quickly on whether businesses with 100 or...
IOWA STATE・14 DAYS AGO