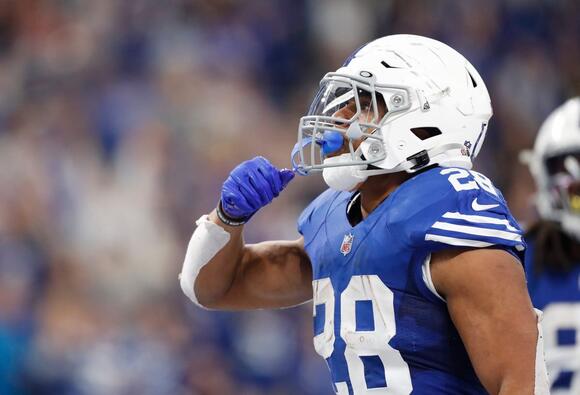 Check out odds, plays and more for the Indianapolis Colts vs. Houston Texans NFL Week 13 matchup on December 5, 2021.

The Indianapolis Colts (6-6) and Houston Texans (2-9) will face each other in a Week 13 NFL clash of AFC South opponents.

Odds for Colts vs. Texans

The 2021 NFL regular season is over and playoffs are in full swing, which brings us to one of our
NFL・2 DAYS AGO
Sportsnaut

The NFL MVP odds have received their final update now that the 2021-22 NFL regular season is in the books.
NFL・2 DAYS AGO
Sportsnaut

A year ago, the Indianapolis Colts got behind the idea of Carson Wentz being their franchise quarterback, by trading their
NFL・1 DAY AGO
Sportsnaut

NFL TV ratings, a look forward: The NFL Playoffs have arrived, following a 2021 regular season that saw interest in
NFL・1 DAY AGO

Michigan head football coach Jim Harbaugh has been hitting up the country recruiting potential new players for the Wolverines program.
NFL・2 DAYS AGO
The Spun

The Cleveland Browns’ season didn’t end the way they wanted it to, as the franchise took a step backward from their 11-5 campaign last year to fall to 8-9. One of the big reasons for the Browns’ step back was the performance of quarterback Baker Mayfield, who noticeably struggled as he attempted to play through a nagging shoulder injury. Mayfield’s struggles opened up the rumor mill to a possible Browns trade, to which an anonymous NFL executive responded to with a stern warning to Cleveland, via Jeremy Fowler of ESPN (h/t Browns Wire):
NFL・2 DAYS AGO

The retirement of longtime starting quarterback Ben Roethlisberger has left the Pittsburgh Steelers with a gaping hole at the QB position. But according to popular football video game “Madden 22,” that QB1 position will be filled by an intriguing name this coming season. The game’s franchise simulator seems...
NFL・2 DAYS AGO
ESPN

TAMPA, Fla. -- Former Buccaneers wide receiver Antonio Brown said his recent sideline outburst against the New York Jets that resulted in his dismissal from the Buccaneers, and previous incidents he has been involved in, have been miscategorized as "mental health issues." In a preview of an episode of "I...
NFL・1 DAY AGO
Sportsnaut

Five-star quarterback transfer Jaxson Dart is one of the most highly-sought-after prospects in the 2022 portal. And on Wednesday, he made an interesting visit to a prospective school. According to reports from On3 Sports, the now-former USC signal caller traveled to his hometown of Provo, Utah to visit with the...
PROVO, UT・1 DAY AGO
FOX Sports Radio

A former NFL defensive tackle died in his Leavenworth prison cell at the age of 43.
NFL・2 DAYS AGO
WEEI Sports Radio

ESPN’s Mel Kiper Jr. released his first mock draft on Wednesday and he has the New England Patriots selecting a big-name wide receiver at No. 21 overall.
NFL・2 DAYS AGO
The Spun

The post-Ben Roethlisberger era in Pittsburgh has commenced. Big Ben played in what’s expected to be his final NFL game last weekend in a postseason loss to the Kansas City Chiefs. Now, all eyes in Pittsburgh turn to the future of the team’s quarterback position. Danny Kanell has...
NFL・1 DAY AGO
The Spun

In just a few days, the Tampa Bay Buccaneers will host the Los Angeles Rams in the Divisional Round. With a trip to the NFC title game on the line, the Buccaneers enter as a slight favorite. According to most sports books, the Buccaneers are a three-point favorite over the Rams.
NFL・1 DAY AGO
USA TODAY

Last season's 31-20 defeat to the Cincinnati Bengals was the low point for a Tennessee Titans defense that has improved greatly in 2021.
NFL・2 DAYS AGO
Sportsnaut

A number of NFL futures bets can be placed throughout the 2021 NFL season, but Super Bowl odds are where
NFL・2 DAYS AGO