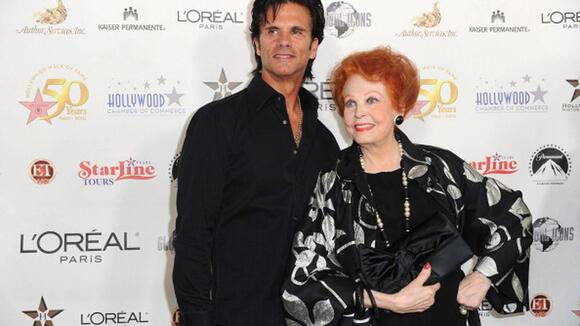 NEW YORK — Arlene Dahl, the fiery redhead best known for her turn in 1959′s “Journey to the Center of the Earth,” died Monday in New York at the age of 96.

“She was the most positive influence on my life. I will remember her laughter, her joy, her dignity as she navigated the challenges that she faced. Never an ill word about anyone crossed her lips. Her ability to forgive left me speechless at times. She truly was a force of nature and as we got closer in my adult life, I leaned on her more and more as my life counselor and the person I knew that lived and loved to the fullest,” Lamas wrote.

Born in Minneapolis, Dahl’s career began in modeling before transitioning to the stage and finally Hollywood in 1946, Variety reported.

Dahl’s hefty body of work included such films as “The Bride Goes Wild,” “Reign of Terror,” “Three Little Words,” “Woman’s World,” “Slightly Scarlet” and “Journey to the Center of the Earth.” She also appeared in “A Southern Yankee,” “Scene of the Crime,” “Desert Legion” and “Jamaica Run,” which starred Fernando Lamas, whom she later married, the outlet reported.

Dahl also founded her namesake lingerie and cosmetics line, Arlene Dahl Enterprises, in the mid-1950s; worked as a beauty columnist; founded a perfume company; and worked as an advertising executive for Sears, Roebuck & Co. before returning to acting via daytime dramas “One Life to Live” and “All My Children,” as well as stints on ‘80s primetime stalwarts “Fantasy Island” and “The Love Boat.”

According to Variety, Dahl married six times and is survived by her current husband, Marc Rosen; son, Lorenzo Lamas; two other children; grandchildren and great-grandchildren.

When actors Tobey Maguire and Willem Dafoe reprised their roles in “Spider-Man: No Way Home,” they achieved a world record for longest career as a live-action Marvel character. In a news release, Guinness World Records said the pair as Peter Parker/Spider-Man and Norman Osborn/Green Goblin made their first...
MOVIES・3 HOURS AGO