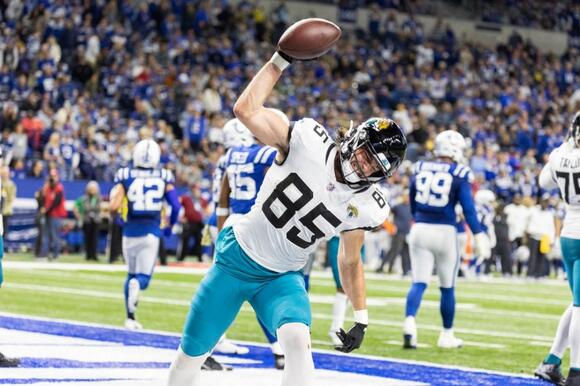 Jacksonville Jaguars tight end Dan Arnold is headed to injured reserve with a sprained MCL in his right knee.

NFL Network reported it’s a grade 2 sprain that is likely to sideline Arnold for four to six weeks, which could end his season. He’ll have to miss at least three games with the IR stint.

The Jags (2-9) have six games remaining.

Arnold, 26, was injured in the second quarter of Sunday’s loss to Atlanta while fighting for extra yards on what was a 9-yard catch. He left the game and did not return. He has 28 catches for 324 yards in eight games in Jacksonville. 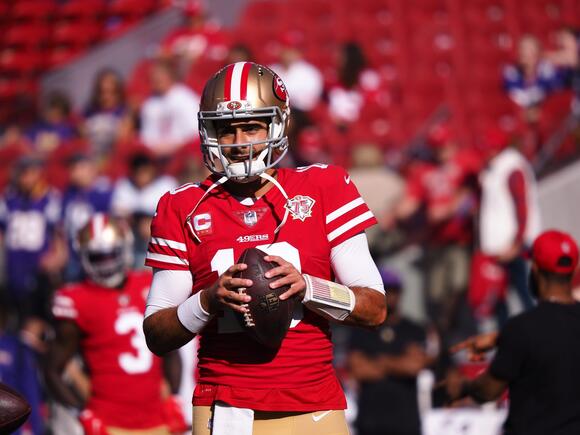 Arnold was traded to the Jags from Carolina on Sept. 27. He has 35 catches for 408 yards overall on the season.

He has 86 career catches for 1,123 yards and seven touchdowns for four teams.

James O’Shaughnessy is expected to take over as the starter. He has 10 catches for 101 yards in three games this season. He had just come off IR.

No. 19 Ohio State takes a breather from Big Ten play Tuesday to host IUPUI in a game that wasn’t
COLLEGE SPORTS・5 HOURS AGO
Sportsnaut

Super Bowl 2022: The Tampa Bay Buccaneers are the reigning NFL champions, but who'll make the playoffs — and lift the Lombardi Trophy at the end of this season?
NFL・20 HOURS AGO
FanSided

Jerry Jones reaction to loss: Dallas Cowboys owner sent a stern message that sure sounded like a direct shot at Mike McCarthy after Sunday’s loss. Let’s spare hyperbole: The Dallas Cowboys playoff loss on Sunday afternoon was nothing short of embarrassing. Dallas entered the postseason with its sights...
NFL・23 HOURS AGO
FanSided

3 Cowboys who should be fired after playoff disappointment

As the Dallas Cowboys struggled and underachieved in the NFL Playoffs, here are three names Dallas should consider moving on from. The Dallas Cowboys had an absolutely terrible evening as they completely fell on their faces when facing the San Francisco 49ers. San Francisco exposed just about every fault that Dallas had and took advantage of every single penalty and mental mistake the Cowboys made.
NFL・23 HOURS AGO

FOX NFL broadcaster and former Cowboy great Troy Aikman didn’t seem to be too happy that he and Joe Buck were in Tampa Bay rather than Dallas. As Buck teased the next Sunday NFC playoff matchup between the Cowboys and 49ers on CBS, Aikman voiced his displeasure with some coded language.
NFL・1 DAY AGO
Sportsnaut

For 18 seasons, Ben Roethlisberger has been the face of the Pittsburgh Steelers’ franchise. He’s earned two Super Bowl titles
NFL・20 HOURS AGO
93.7 The Fan

NFL picks against the spread. NFL Divisional Playoffs edition. Oh boy, this two-day slate is going to be an absolute
NFL・2 HOURS AGO
The Spun

There are a lot of parallels between the careers of quarterbacks Ben Roethlisberger and Russell Wilson. With Roethlisberger retiring, Wilson has reflected on Big Ben’s Hall of Fame career. Taking to Twitter last night, Wilson congratulated Roethlisberger on an incredible career. He called him a “legend” and “generational” –...
NFL・9 HOURS AGO
The Spun

Arch Manning, the nephew of Peyton and Eli Manning, is the top college football recruit in the country. The five-star quarterback has scholarship offers from nearly every major program. The class of 2023 product has been taking his time with his recruitment, though he could be getting closer to a...
COLLEGE SPORTS・1 DAY AGO
Larry Brown Sports

The Pittsburgh Steelers will have to address the quarterback position this offseason for the first time in 18 years. They won’t have that high of a draft pick after reaching the playoffs, so some have wondered if they could explore blockbuster trade scenarios. That does not appear to be the plan.
NFL・1 DAY AGO
ClutchPoints

Just like the rest of the Dallas Cowboys fan base, former team quarterback Tony Romo didn’t like how the Wild Card game against the San Francisco 49ers ended. It’s not that Romo is blaming anyone. The Cowboys could have done better in setting up the final play, and the referees might have some shortcomings as well. However, for the four-time Pro Bowler, it was just a frustrating ending for the home team and their fans who were hoping for that miracle to give them the victory.
NFL・20 HOURS AGO
ClutchPoints

The Las Vegas Raiders overcame a myriad of obstacles to make the playoffs this season. As they prepare to face the Cincinnati Bengals, they will have to get serious about the team’s future regardless of the outcome. The most important factor of Las Vegas’ future is the Derek Carr situation.
NFL・2 DAYS AGO