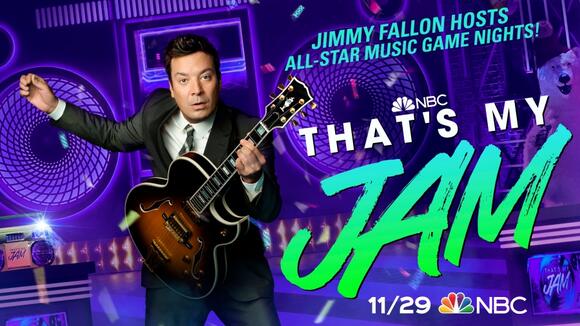 (WCMH) — NBC has announced that Jimmy Fallon will host a new musical game show called “That’s My Jam” and the first episode will air tonight on NBC at 10 p.m., right after “The Voice.”

“That’s My Jam” is described as an hour-long “music and comedy variety game show” by NBC and includes several signature games “Tonight Show” fans might recognize.

“’That’s My Jam’ is taking all of our best musical games from ‘The Tonight Show’ and just take it to the next possible level,” said Fallon in an interview about the show. “I mean, big production pieces. It is giant. It’s a massive show.”

The show’s premiere will be somewhat of a “The Voice” crossover event. “Voice” Season 21 coaches Ariana Grande, Blake Shelton, Kelly Clarkson, and John Legend will be joining “The Tonight Show” host in what the network calls a “sneak episode.”

“I think the thing we’ve always done with ‘The Tonight Show’ is blended comedy and music in the right way,” he said. “Every comedian I know wants to be a rock star and a lot of the rock stars I know wanna be comedians. This lets you do both and it’s really just fun from start to finish.”

Two teams of two celebrities will compete by playing games like “Wheel of Impossible Karaoke,” “Perfect Mashup,” “Vinyl Countdown” and “Slay It, Don’t Spray It.” The celebrity winnings will be donated to charity.

“We added a charity element to the show because it’s a game show with all these celebrity friends, but you know, they, they don’t really need a prize, or they do get a golden boom box, but what’s better is that we raise awareness to their causes, and so it’s another way to give back,” he said.

After tonight’s episode, the show will join the network’s mid-season lineup on Mondays starting Jan. 3 at 9 p.m.

“The exciting thing for me, too, is to be in a primetime slot,” Fallon said. “You know, I’m used to 11:30 or 12:30 late-night, you know? So usually when people are watching, they’re really on their way to sleep. This, this way people are awake as all-new eyeballs.  A whole new audience. And yeah, it’s a lot of fun and excitement.”

Will Forte on hosting ‘SNL’ for the first time

"Saturday Night Live" is live once again this week and former cast member Will Forte will be serving as host.
TV & VIDEOS・2 DAYS AGO
WOOD TV8

1 dead after crash near Grant

A person has died after a crash near Grant on Thursday.
GRANT, MI・3 DAYS AGO
101.1. The Wiz

Normani is trending after appearing alongside Taraji P. Henson on Jimmy Fallon's new game show "That's My Jam," after getting sprayed with water that threatened to ruin her leave out.
CELEBRITIES・12 DAYS AGO

Where is Questlove on The Tonight Show Starring Jimmy Fallon?

If you’re a fan of The Tonight Show Starring Jimmy Fallon you’ll have heard of – but probably never paid too much mind to – the live band for the show The Roots. Lead drummer and frontman of the band, Questlove, could be missed on the show due to the other celebrity guests, but he is equally as talented and just as interesting as those who appear on the series.
MUSIC・1 DAY AGO
TODAY.com

Weekend TODAY’s own meteorologist Somara Theodore caught Jimmy Fallon’s eye this week after she did her best to fight through a cough while doing her live weather forecast. Fallon joked “at first it looked like she was just overcome with the emotion at the sight of a cold front.”Jan. 22, 2022.
CELEBRITIES・1 DAY AGO
Complex

After being called “purposeless” by Trudeau, getting investigated by the Federal government, and becoming the Internet’s latest punching bag, the infamous Quebec airplane partiers have now made it onto Jimmy Fallon. The slew of reality TV stars, music producers, and influencers, who are all part of an...
CELEBRITIES・13 DAYS AGO
uvureview.com

Mindfulness is both a practice of self mastery and a therapeutic technique. As a university student often you are racing around without taking inventory of your current wellbeing. Every Monday join us to learn more about your options for mindfulness and meditation. To start off our series we turned to...
TV & VIDEOS・6 DAYS AGO

Sometimes I hate Facebook memories. Usually, statuses will pop up that make me cringe from my teens and twenties (lots of "<3") however, my memories from January 4th reminded me of one of the best standup shows I've ever seen back in 2009. As Hudson Valley residents we all know...
POUGHKEEPSIE, NY・14 DAYS AGO
94.3 WCYY

It's been almost two weeks since the death of the beloved Betty White and despite the fact that she was just a few weeks shy of being a centenarian, we still can't believe she's gone. I, like so many others, was a big fan of hers. My fandom however didn't...
WELLS, ME・10 DAYS AGO
The Tennessean

She may have recently broken her finger — and put the X-ray on the cover of her latest single — but now, a 17-year-old Nashville-based singer-songwriter is starting 2022 off on the right foot. Gayle — no surname, just "Gayle" — made her television debut last week on...
NASHVILLE, TN・15 DAYS AGO
hotnewhiphop.com

This is the final week of rollout for Cordae's sophomore album From A Bird's Eye View, which is set to release Friday (Jan. 14). Along with three promotional singles, a cover announcement, a preparatory freestyle inspired by Kendrick Lamar and a tour announcement, Cordae released the album's tracklist yesterday (Jan. 10), revealing tons of high-profile features and producers for the project.
MUSIC・12 DAYS AGO

Jared Martin recognized the drawl of the man walking by him backstage, talking on a mobile phone and surrounded by security guards: Matthew McConaughey, the actor known for his Texas swagger and charismatic roles in films like “Dazed and Confused” and “A Time To Kill” and HBO series “True Detective.”
HUNTSVILLE, TX・5 DAYS AGO
udiscovermusic.com

Robert Glasper delivered an all-star performance of “Black Superhero” on last night’s episode of The Tonight Show Starring Jimmy Fallon. You can watch the footage below. The Grammy Award-winning musician appeared as the musical guest on the NBC chat show in support of his upcoming album Black Radio III, which is set for release on February 25 via Loma Vista Recordings.
CELEBRITIES・5 DAYS AGO
CentralTrack

Jennifer Coolidge took a classic approach to her late-night talk show appearance. The actress was on “The Tonight Show Starring Jimmy Fallon” on Thursday to discuss her role on HBO’s “White Lotus” and how she got involved with Ariana Grande’s music video for “Thank You Next.” On the show, Coolidge wore a chic, traditional look consisting of a black lace mini dress from Dolce & Gabbana. The dress featured long sleeves and a scoop neckline. She added oversized gold hoop earrings as well as a few gold rings to the outfit. Her blond locks were worn in polished waves, adding to...
BEAUTY & FASHION・2 DAYS AGO

Kelly Clarkson is a singer, author, daytime TV host and fashionista. When she isn’t coaching her team on The Voice, the Texas native is having a blast leading discussions on The Kelly Clarkson Show. Apart from featuring celebrity guests and talking about the latest news headlines, Kelly shows off her breathtaking vocals in her Kellyoke segment. And if that wasn’t enough for folks to tune in every weekday, the American Idol alum always steps onto the stage with a buzz-worthy outfit.
BEAUTY & FASHION・22 HOURS AGO
iHeartRadio

Jimmie Allen: 'My Journey In Country Music...Is Bigger Than Me'

Allen shared a heartfelt message to express his gratitude for his latest award nomination for the upcoming 53rd NAACP Image Awards.
MUSIC・4 DAYS AGO