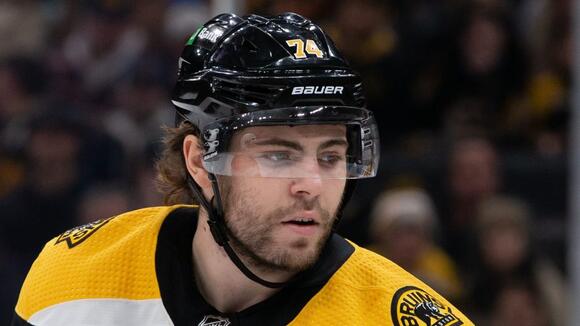 The Bruins winger has requested a trade, according to TSN’s Ryan Rishaug .

“[DeBrusk] asked for a trade over the weekend,” Rishaug reported. “It’s felt a change of scenery moving forward would be beneficial. DeBrusk will remain with the team while the Bruins try and facilitate the request.”

Elliotte Friedman reported that the Bruins are “working on the possibility of a fresh start for the player” but that “nothing is imminent at this time.”

DeBrusk, 25, was a healthy scratch for Sunday’s win over the Canucks. He has three goals and three assists in 17 games played this year, to go with a minus-2 rating. Now in his fifth season, DeBrusk has scored 70 goals with 70 assists for 140 points in 261 games. He’s also scored 16 goals with 10 assists in 59 playoff games.

The 15th overall pick in what has become the infamous 2015 draft for Don Sweeney and the Bruins, DeBrusk has struggled to live up to his draft position for the Bruins, who picked DeBrusk as the second of three consecutive picks in the middle of the first round.

Another week is down in the 2021-22 regular season for the Boston Bruins and it was an interesting one. In this edition of Bruins Weekly, David Pastrnak climbs up a franchise chart, the Black and Gold show some character, they avoid major injuries, Boston will get an up-close look at two possible trade targets on their upcoming road trip, and more.
NHL・2 DAYS AGO
NBC Sports

Ranking Bruins' best assets to use at 2022 NHL trade deadline

The 2022 NHL trade deadline is set for March 21 and the Boston Bruins are among the teams to watch. Bruins general manager Don Sweeney has been pretty active at the trade deadline throughout his tenure in Boston. In fact, last season was good example. He acquired top-six winger Taylor Hall, bottom-six center Curtis Lazar and veteran defenseman Mike Reilly in two trades that involved multiple draft picks and forward Anders Bjork.
NHL・2 DAYS AGO
Yardbarker

The Boston Bruins should be looking to upgrade their roster as we get closer to the trade deadline. Their Stanley Cup window is closing, as core members like Patrice Bergeron, Brad Marchand, and Tuukka Rask are in the back half of their careers. If Bruins expect to go on a run, they will have to become buyers – the Atlantic Division is stacked, after all – and management should be contacting their 2021 postseason rivals, the New York Islanders.
NHL・1 DAY AGO
CBS Boston

BOSTON (CBS) — Brad Marchand still has plenty of hockey left in him. But he’s setting himself up for a nice career as the NHL’s Roastmaster General once he’s done playing. The Bruins’ winger has shifted his agitating ways from the ice to Twitter lately, with the Arizona Coyotes serving as the latest victim. With news breaking Thursday that the Coyotes may end up using the 5,000-seat arena at Arizona State University for a few years as a temporary home, Marchand was asked on Twitter to share his opinion. “Well … the only way they get 5,000 fans at their games now is...
NHL・9 HOURS AGO

The Boston Bruins could use another defenseman -- preferably of the top-four variety -- before they enter the 2022 Stanley Cup Playoffs. They have until the March 21 NHL trade deadline to make an impactful move to upgrade the blue line. One of the best defensemen who could be available...
NHL・39 MINUTES AGO
NESN

Jake DeBrusk is feeling himself right now. The Boston Bruins winger entered Wednesday night’s showdown against the Western Conference-leading Colorado Avalanche with three points over his last two games and added another with his seventh goal of the season in the second period to knot the score at one.
NHL・1 DAY AGO
985thesportshub.com

(0:00) Felger, Mazz and Murray start Thursday’s show with Taylor Hall’s hit on Nathan MacKinnon last night and both teams responses to the hit. (13:10) The Bruins loss in overtime to the Avalanche after leading 3-1 headed into the 3rd period is discussed. (24:30) Jake Debrusk good play...
NHL・1 DAY AGO
clnsmedia.com

The Bruins approach this year’s March 21st trade deadline in an interesting spot. On the one hand, they want to compete well in the postseason. They owe that to longtime stars Patrice Bergeron and Brad Marchand. But they also would like to keep a watchful eye on the future....
NHL・1 DAY AGO

Many of the Sens described the hit as a cheap shot and the NHL felt that Batherson was not eligible to be body checked. In addition, it was a high shoulder check that caused Batherson to fall dangerously and with force into the back wall.
NHL・1 DAY AGO
93.7 The Fan

WATCH: Devils former first-round pick Mike McLeod was dropped to the ice by Dallas’ Luke Glendening in a lopsided fight at The Rock on Tuesday night.
NHL・2 DAYS AGO

As the Winnipeg Jets look to end their struggles, the Vancouver Canucks aim to do the same while ushering in
NHL・2 DAYS AGO
WFAN Sports Radio

The NHL took time to celebrate Flyers defenseman Keith Yandle after he broke the league’s ironman record at UBS Arena with his 965th straight game.
NHL・2 DAYS AGO
93.7 The Fan

The Boston Celtics are at a crossroads. They’ve been a .500 team over the last year and a half with
NBA・2 DAYS AGO
CBS Boston

BOSTON (CBS) — Like the rest of Major League Baseball, the Red Sox are in a holding pattern as the league and the MLBPA try to end the current lockout. But when the lockout does end, the Red Sox may make a huge free agent splash. The Red Sox are the favorites to sign Japanese superstar Seiya Suzuki when MLB gets back up and running, according to a report from Yahoo Japan. There is a conflicting report by Nikkan Sports, however, that says that Suzuki has narrowed his list of teams down to three or four — the Mariners, Cubs, Giants...
MLB・2 DAYS AGO
Audacy

Senators left wing Tyler Ennis scored his second career hat trick in Tuesday’s win over Buffalo (his former team), but only one hat was thrown onto the ice with no fans in attendance at the Canadian Tire Centre in Ottawa.
NHL・2 DAYS AGO
CBS Boston

BOSTON (CBS) — Big man Aron Baynes was a fan favorite during his two seasons with the Celtics, bringing a lot of grit to the paint for Boston. Since his departure, Boston fans are always trying to figure out a way to get Baynes back to the C’s. Since he was traded by the Celtics two years ago, there was usually a small “Bring Back Baynes” movement around the trade deadline. But that will not be happening this year, as Baynes is still working his way back from a mysterious injury that he suffered during the 2020 Olympics in Tokyo. While...
NBA・1 DAY AGO