Buy These 2 Stocks Before December Earnings?

Stocks bounced back on Monday following Friday’s big Omicron variant-focused selloff. The quick pullback was driven by real fears and lower holiday volume. Investors began pouring back into the markets to start the week as Wall Street appeared to determine that the new covid strain likely won’t have as significant of an impact as initially feared.

Covid and new strains are likely here to stay and investors and consumers have largely proven they are willing to focus on signs of progress in favor of fears. It is also worth constantly remembering that selling is a healthy aspect of all well-functioning markets, especially one that’s soared for over a year and a half.

Looking back, investors helped wash away all of the losses from the September and early October downturn in a matter of weeks. And the bulls appear to be in control, at least for now, with the S&P 500 and the Nasdaq both trading well above their 50-day moving averages despite Friday’s big drops.

There could certainly be more selling and profit-taking in December. Luckily, the positive backdrop for stocks remains in place even in the face of continued supply chain bottlenecks, rising prices, and difficulty filling millions of open jobs.

First off, interest rates will remain historically low for the foreseeable future no matter when the Fed starts to lift its core rate. Secondly, the S&P 500 earnings picture remains strong. And U.S. consumer spending was solid in October, which is a great sign for the entire pivotal holiday shopping period.

With this in mind, investors likely want to remain on the hunt for strong stocks as we enter the final month of 2021. Here are two modern retail stocks that investors might want to consider buying… 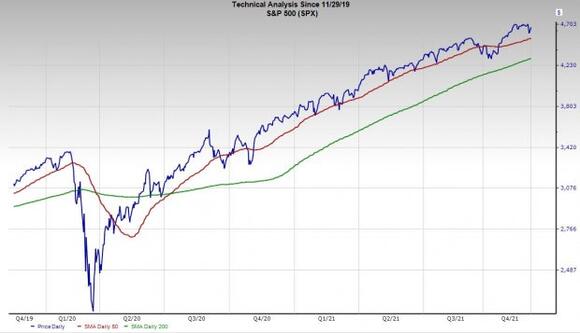 Lululemon has transformed from a small high-end yoga clothing maker 20 years ago into a global apparel powerhouse. The company currently sells an array of athletic apparel for women and men, alongside clothing that can be worn to work, dates, the golf course, and beyond. LULU has also rolled out self-care items, more outwear such as coats, and other accessory-style products.

Lululemon closed last quarter with 534 total company-operated stores, up from 506 in the prior-year period. LULU is focused on expanding in Asia and Europe, while continuing to improve its digital offerings. The company topped our Q2 estimates and raised its guidance, with e-commerce accounting for 42% of revenue. 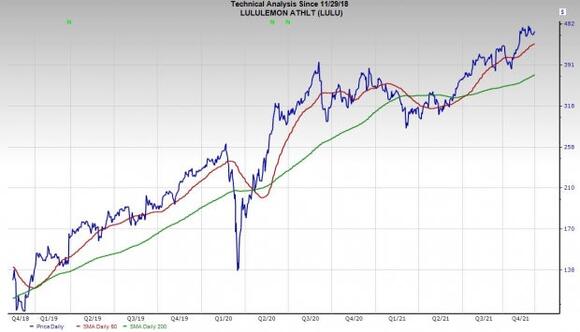 Looking ahead, Zacks estimates call for fiscal 2021 revenue to surge 42% to $6.26 billion, with FY22 projected to come in another 17% higher to hit $7.33 billion. This growth, which is driven in part by Mirror, follows 11% top-line expansion last year and FY19’s 21%. Meanwhile, its adjusted earnings are projected to soar 60% and 21%, respectively during this stretch.

Lululemon has beaten our EPS estimates by an average of 25% in the trailing four periods, including a 36% beat last quarter. The company’s consensus earnings estimates have climbed recently and its Most Accurate estimates (or the newest) are higher. This bottom-line positivity helps LULU land a Zacks Rank #2 (Buy) right now.

Plus, 15 of the 21 broker recommendations we have for Lululemon are “Strong Buys,” with none below a “Hold.” The athleisure firm also boasts a strong balance sheet and its Textile-Apparel space sits in the top 20% of over 250 Zacks industries.

LULU hit records in mid-November, with shares up 45% in the last six months. This run helped end an up-and-down stretch that saw the stock move roughly sideways for nearly a year. Longer-term, Lululemon stock has skyrocketed over 700% in the last five years to crush its industry’s 75% and the S&P 500’s 120%.

Despite sitting near its records, LULU trades at a 20% discount against its own year-long highs in terms of forward earnings and sales. And the recent market pullback has it near neutral RSI levels at 56, which could give it room to run if it’s able to impress Wall Street next week.

Chewy is an e-commerce pet store that went public in 2019. The company has expanded rapidly as consumers gravitate toward convenience in the form of delivery and beyond. CHWY sells pet food, supplies, treats, medications, and more for a variety of animals. Chewy has found success by adding loyal pet owners to its ranks, with roughly 70% of sales coming from its Autoship business that allows people to have food and more delivered at regular intervals.

Chewy posted a banner year in 2020 on the back of the pandemic. The firm added 43% more users in 2020 to close the year with 19.2 million. The company, which has been in business for over a decade, has also moved far beyond food and toys. Its offerings include a telehealth service called Connect with a Vet and a beefed-up pet pharmacy platform.

Unfortunately for Chewy, the near-perfect backdrop to succeed in business and on Wall Street is over as people return to their normal lives. The firm fell short of revenue estimates last quarter—which it rarely does—and it reported a larger-than-projected quarterly loss. Chewy did close Q2 with 20.1 million customers, up 21% from the year-ago quarter and its revenue climbed 27%. But Wall Street has continued to dump the stock amid rising costs and slowing growth. 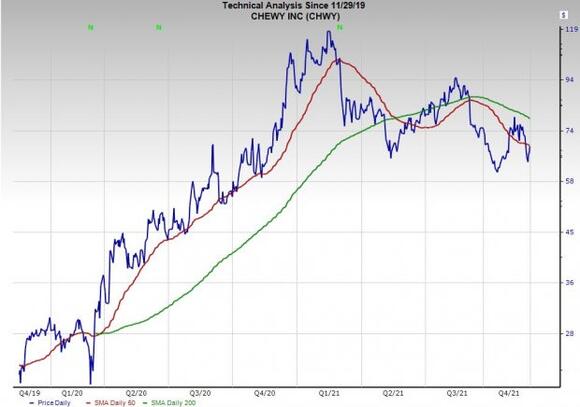 Chewy’s overall consensus earnings estimates have trended lower since its last report to help it grab a Zacks Rank #3 (Hold) at the moment. And it’s part of a group that’s in the bottom 11% of all Zacks industries. That said, nine of the 15 brokerage recommendations Zacks has are “Strong Buys” and it operates a business that isn’t going out of style anytime soon, even though its days of huge 40% growth might be over.

CHEWY shares dipped on Monday as the market climbed and it has now fallen over 20% this year, including a 23% drop since its Q2 release. Taking a step back, Chewy is still up 190% in the last two years and its current Zacks consensus price target of $98.33 a share represents 45% upside to Monday’s levels.

The pullback has Chewy trading at over a 50% discount to its own year-long highs at 2.8X forward 12-month sales. And the nearby chart shows CHWY attempting to return to its 50-day moving average. That said, some investors might want to wait for more signs of a comeback, especially given that Wall Street is currently betting somewhat heavily against the stock—short interest at roughly 20% of the float.

After a clean sweep of 6 election referendums in 5 states, pot is now legal in 36 states plus D.C. Federal legalization is expected soon and that could kick start an even greater bonanza for investors. Zacks Investment Research has recently closed pot stocks that have shot up as high as +147.0%

Want the latest recommendations from Zacks Investment Research? Today, you can download 7 Best Stocks for the Next 30 Days. Click to get this free report

The company missed earnings and growth expectations, but is still growing members and earning profits!. I’ve admired Netflix (NFLX) for a long time, but never really considered owning it until now. The company remains profitable and growing, but the market is undoing a lot of its prior excesses and selling off a number of “Covid Winners” and it looks like that sentiment may have caught up with Netflix. Even though it may have disappointed other people’s expectations, I’m interested in buying at the price we see pre-market of around $410/share, and I would be more interested as it keeps falling.
STOCKS・10 HOURS AGO
Entrepreneur

Why investors should use the Zacks Earnings ESP tool to help find stocks that are poised to top quarterly earnings estimates.
STOCKS・11 HOURS AGO
Entrepreneur

FULT, AMNB, and MBWM made it to the Zacks Rank #1 (Strong Buy) income stocks list on January 21, 2022
STOCKS・14 HOURS AGO
Entrepreneur

The Zacks Earnings ESP is a great way to find potential earnings surprises. Why investors should take advantage now.
STOCKS・11 HOURS AGO

AbbVie, The Andersons and Ingredion are highlighted in this Zacks Value Traders article.
STOCKS・12 HOURS AGO
Entrepreneur

Here at Zacks, our focus is on the proven Zacks Rank system, which emphasizes earnings estimates and estimate revisions to find great stocks. Nevertheless, we are always paying attention to...
STOCKS・11 HOURS AGO
Entrepreneur

Exorbitant debt financing might result in a corporation's bankruptcy in the worst-case scenario. So, you can may consider buying low-leverage stocks like FELE, SNDR, TER, MOS & SAIA
STOCKS・13 HOURS AGO
Zacks.com

Wall Street is facing severe volatility in this week as market participants are keeping their fingers crossed for a hawkish Fed in the near term. However, the fourth-quarter 2021 earnings season is gathering pace with better-than-expected results so far. Earnings results are expected to stay strong this time around. Six...
STOCKS・14 HOURS AGO

Here at Zacks, we focus on our proven ranking system, which places an emphasis on earnings estimates and estimate revisions, to find winning stocks. But we also understand that investors develop their own strategies, so we are constantly looking at the latest trends in value, growth, and momentum to find strong companies for our readers.
STOCKS・9 HOURS AGO
Seeking Alpha

What To Know About Alibaba Stock Before Upcoming Earnings: Finally Time To Buy

Alibaba has fallen so much that it has been "dead money" since it came public more than 7 years ago. Alibaba (BABA) has seen its stock fall so much that it has been essentially "dead money" over its lifespan as a public company. Yet the company has grown at a torrid pace over that time span, and the stock trades at a single-digit multiple of forward earnings projections. The company has 40% of its market cap held in cash and equity investments, and can likely continue to grow over the long term as it benefits from secular growth tailwinds from e-commerce, cloud computing, and more. While I acknowledge the binary range of outcomes, I am moving to a buy on BABA.
STOCKS・12 HOURS AGO
Seekingalpha.com

Is Citigroup Stock A Buy Or Sell After Recent Earnings?

Citigroup's shares have underperformed following its Q4 2021 earnings announcement, as its core earnings, excluding the impact of share buybacks, would have been flattish YoY in the recent quarter. Elevator Pitch. I assign a Hold investment rating to Citigroup Inc.'s (C) shares. C's recent earnings did not impress the market...
STOCKS・11 HOURS AGO
Entrepreneur

4 Stocks Worth Buying After Strong Earnings Reports This Week

Dillard's (DDS) Gains As Market Dips: What You Should Know

Dillard's (DDS) closed the most recent trading day at $231.26, moving +0.85% from the previous trading session.
STOCKS・2 HOURS AGO
Entrepreneur

Beazer Homes (BZH) closed the most recent trading day at $18.72, moving -1.11% from the previous trading session.
STOCKS・2 HOURS AGO
Entrepreneur

Philip Morris (PM) Gains As Market Dips: What You Should Know

Philip Morris (PM) closed at $102.92 in the latest trading session, marking a +0.88% move from the prior day.
STOCKS・2 HOURS AGO
Entrepreneur

The nickel ETF hit a 52-week high lately. Can it soar further?
STOCKS・13 HOURS AGO
Entrepreneur

LabCorp (LH) Gains As Market Dips: What You Should Know

LabCorp (LH) closed at $271.57 in the latest trading session, marking a +0.26% move from the prior day.
STOCKS・2 HOURS AGO
Entrepreneur

Ethan Allen (ETD) Gains As Market Dips: What You Should Know

Ethan Allen (ETD) closed the most recent trading day at $24.37, moving +0.45% from the previous trading session.
STOCKS・2 HOURS AGO
Entrepreneur

Tapestry (TPR) closed the most recent trading day at $36.55, moving -0.57% from the previous trading session.
STOCKS・2 HOURS AGO