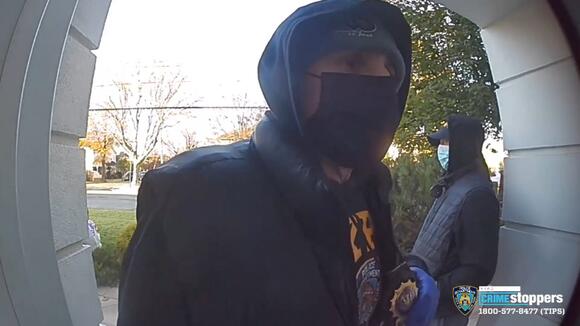 New video has been released of two men who posed as NYPD officers to tie-up and rob homeowners in the Bronx. Footage shows a man wearing an NYPD sweatshirt with a badge hanging around his neck push his way inside. The incident happened on Tuesday, November 9 , near Country Club Road and Polo Place just after 8 a.m.

Two men, one with an imitation NYPD badge, are being sought in a home invasion in the Bronx in which two residents were tied up, police said.

After showing a gun, the thieves tied up a 50-year-old man and a 40-year-old woman with zip ties. The robbers then took in off in a white BMW with $30,000 in cash and $100,000 worth of jewelry. The unoccupied vehicle was recovered shortly after. ALSO READ | Video shows 2 NYPD cops shot by suspect during struggle in Bronx

Marcus Solis reports on surveillance video released after the two officers were shot in a struggle with the suspect.

Authorities said the suspects were white men in their 50s and 60s. They're hoping the video will help them catch the crooks. ---------- * More Bronx news * Send us a news tip * Download the abc7NY app for breaking news alerts * Follow us on YouTube

First of all I never knew anybody could go to a Uniform store to purchase an Officer Uniform! They need to start asking for IDs in these Uniform stores! And where did they get the Badges??

Setup. Someone knew about the cash and jewelry that was in the home. Definitely was personal!!!!

The NYPD says the 38-year-old woman walked into the lobby of the building when the man slapped her backside.
QUEENS, NY・5 HOURS AGO
ABCNY

Police are ramping up their efforts to catch a suspect connected to a shooting that left a baby girl shot in the face in the Bronx last week.
BRONX, NY・13 HOURS AGO
ABCNY

A vigil was held outside a police precinct in Harlem Monday night, to represent solidarity between officers and the community after two cops were shot, one fatally, Friday night.
NEW YORK CITY, NY・13 HOURS AGO
ABCNY

Police in Maplewood and Irvington are investigating a rash of at least nine armed robberies that all occurred on the same day.
MAPLEWOOD, NJ・18 HOURS AGO

A 13-year-old boy was charged with arson, reckless endangerment and criminal mischief for allegedly setting the fire that burned through an East Village card shop earlier this month.
PUBLIC SAFETY・27 MINUTES AGO
ABCNY

The 91-year-old victim was discovered unconscious and unresponsive on the first floor after firefighters extinguished the blaze in Bellerose, Queens.
QUEENS, NY・28 MINUTES AGO
ABCNY

The two NYPD officers who were shot, one of them fatally, inside a Harlem apartment on Friday were responding to a domestic disturbance call, one of the most dangerous circumstances for police, experts say.
NEW YORK CITY, NY・1 DAY AGO
ABCNY

The cause of death of Lauren Smith-Fields, a 23-year-old woman who was found dead after a date, has been revealed.
BRIDGEPORT, CT・5 HOURS AGO

Man knocked to the ground, punched repeatedly during robbery in Bronx apartment lobby

A 66-year-old man was knocked to the ground and punched repeatedly during a startling robbery inside an apartment building lobby in the Bronx.
BRONX, NY・2 DAYS AGO
ABCNY

According to the data presented, there were 461 felony assaults in the subway system last year, the highest number since 1997.
NEW YORK CITY, NY・20 HOURS AGO
ABCNY

Cheng Hsiao and her two children, 3-year-old Ethan and 2-year-old Ian, live in the Towaco section of Montville Township and were reported missing on Sunday.
MORRIS COUNTY, NJ・19 MINUTES AGO

A 16-year-old was shot in the back of the head and is in critical condition at the hospital.
BROOKLYN, NY・2 DAYS AGO
ABCNY

It's not clear if he was struck by a train, but police said he did not make contact with the electrified third rail.
MANHATTAN, NY・1 DAY AGO
ABCNY

Anti-violence advocates in the Bronx aim to stop shootings in New York City and put kids on the right path.
BRONX, NY・19 HOURS AGO
ABCNY

A man who went on a viral and racist tirade at a Connecticut smoothie shop has been fired from his job as a financial advisor with Merrill Lynch.
FAIRFIELD, CT・18 HOURS AGO
ABCNY

This is truly a heartbreaking time for the police force, but even more so for the families of the officers involved - and there is help for them.
NEW YORK CITY, NY・2 DAYS AGO
ABCNY

Whether it's a residential street in the Bronx or a subway station in Midtown, Manhattan, New Yorkers feel more vulnerable than they have in years.
NEW YORK CITY, NY・19 HOURS AGO
ABCNY

Three NYPD officers have been shot in the first 20 days of 2022, and it was another close call for them Thursday in the Bronx.
BRONX, NY・4 DAYS AGO
ABCNY

The 22-year-old NYPD police officer who was shot to death in Harlem Friday night, joined the force to make a difference in the "chaotic city," he once wrote.
NEW YORK CITY, NY・2 DAYS AGO