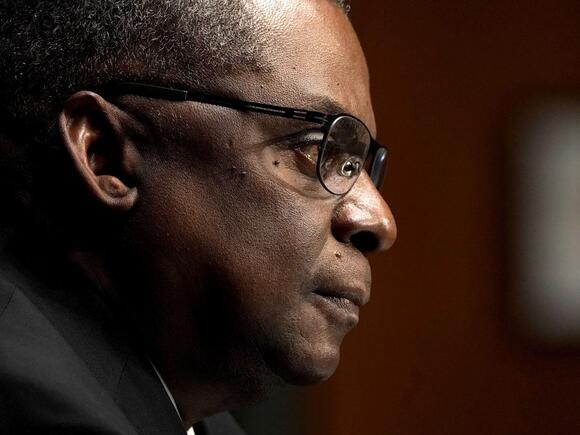 US Defense Secretary Lloyd Austin denied a request from Oklahoma's governor to exempt the state's National Guard troops from the Pentagon's vaccine mandate.

In a letter sent to Oklahoma Gov. Kevin Stitt on Monday, Austin did not specify how the mandate would be enforced but said that failure to comply with the vaccine mandate may "jeopardize" troops' status in the National Guard.

"In making our decision to require vaccination for Service members, we considered the thousands of hospitalizations and the hundreds of deaths, among Service members, civilians, and their families," Austin wrote. "COVID-19 takes our Service members out of the fight, temporarily or permanently, and jeopardizes our ability to meet mission requirements."

Stitt, a Republican, made the request in early November for Austin to exempt Oklahoma Guardsmen from the vaccine mandate. On November 2, Stitt wrote that the mandate "violates the personal freedoms of many Oklahomans, as it asks them to potentially sacrifice their personal beliefs in order to not lose their jobs."

In the Monday response to Stitt, Austin wrote that the concerns raised by the governor "do not negate the need for this important military readiness requirement."

Charlie Hannema, a spokesperson for Stitt, told the Associated Press that Stitt "maintains his position" that he is "the commander-in-chief for all members of the Oklahoma National Guard while they are on Title 32 status," meaning while they are considered active duty under state control but the federal government provides pay and benefits.

Brig. Gen. Thomas Mancino, the commanding general of Oklahoma's National Guard, issued a memo on November 11 exempting Oklahoma National Guard troops from the COVID-19 vaccine mandate. In a recording obtained by The Washington Post , Mancino said he was only following orders from the governor when he issued the order.

they are getting rid of the independent thinkers so they will have an army of full compliance. when they use the armed forces against the people for total control they'll be sure no one will disobey

These people put their lives on the line when this shyt started, and now they want to get rid of them because they don’t want the vaccine. This is what y’all voted for.

It is written, "No one is good but God alone"...and ya'll ignoring him while Satan laughs at you, awaiting your souls. "Few will enter the Kingdom of Heaven." Eternity is a long time. Choose this day who you will serve. "One cannot serve two masters." "One cannot love God and money, and one cannot love this world and love God." Christ is the way, the truth and the life...eternally. Ya'll should be concerned about "who gets your eternal soul more than trying to preserve your temporary flesh."

'Everything's up for grabs': The 2022 midterms could see open warfare over election results in an increasingly polarized Congress

Members of Congress are considering reforming how they count electoral votes in 2025. But the 2022 midterms may bring more immediate danger of chaos.
PRESIDENTIAL ELECTION・23 HOURS AGO
Business Insider

Progressives want to unseat Sen. Kyrsten Sinema, and Rep. Ruben Gallego, a Latino and veteran, is emerging as a favorite

Gallego, a Marine turned Arizona congressman has not shied away from criticizing Sinema in recent weeks for her stances on the filibuster. His backers say he's the best Democrat to replace her.
CONGRESS & COURTS・16 HOURS AGO
Business Insider

The legislation would reshape the election landscape in the United States by expanding voting access and re-fortifying the Voting Rights Act.
PRESIDENTIAL ELECTION・21 HOURS AGO

Pro-choice PAC Emily's List will cease support for Sen. Kyrsten Sinema over voting rights: 'She will find herself standing alone in the next election'

The statement comes after Sinema doubled down on her opposition to overhauling the filibuster, effectively killing Biden's push for voting rights legislation.
ARIZONA STATE・16 HOURS AGO
Business Insider

Saban is a close friend of Manchin, the moderate Democratic senator who's resisted calls to change the filibuster to pass a voting-rights bill.
ALABAMA STATE・22 HOURS AGO
Business Insider

"Foreign internal defense is one of the important tools in our toolbox," a Green Beret assigned to a National Guard unit told Insider.
MILITARY・15 HOURS AGO
Business Insider

"It's been difficult to get the White House to focus on improving vaccinations in Malawi, when the president is getting calls about overflowing hospitals in Missouri, one unnamed official said of the international response.
PRESIDENTIAL ELECTION・19 HOURS AGO

67% of Americans support bill to ban stock trading by members of Congress, even as Pelosi resists

Support for a stock trading ban jumped to 74% after respondents were given reasons for and against the proposal the House speaker has opposed.
CONGRESS & COURTS・22 HOURS AGO
Business Insider

The Biden administration is buying 1 billion rapid COVID-19 test kits to give Americans for free. Here's how to get one.

The US Postal Service launched a website on Tuesday where Americans could order at-home, rapid COVID tests to have them delivered to their homes.
PUBLIC HEALTH・21 HOURS AGO
Business Insider

Jim Obergefell, of the landmark Supreme Court ruling on same-sex marriage, is running for office in Ohio

Jim Obergefell, the plaintiff from the landmark Supreme Court case that legalized gay marriage across the nation, is running for state office in Ohio.
OHIO STATE・18 HOURS AGO
Business Insider

The four-engine Boeing jet transported 823 Afghan refugees on a single flight at the end of the war in Afghanistan.
AEROSPACE & DEFENSE・21 HOURS AGO
Business Insider

The US government's approach to free COVID-19 testing stands in stark contrast to the UK, where people have had access to free tests since April.
PUBLIC HEALTH・1 DAY AGO