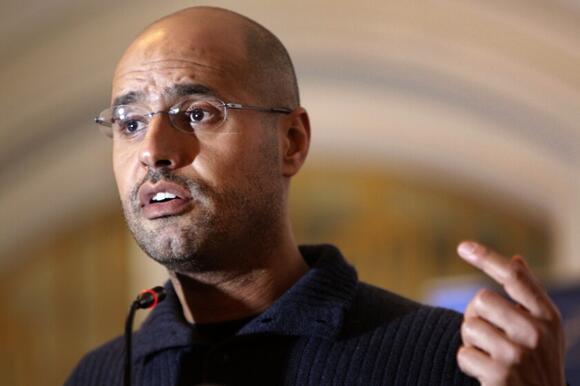 The United Nations expressed concerns Monday over the forced closure of a Libya appeals court that is meant to decide whether the son of the late dictator Moammar Gadhafi can run for president.

The UN mission to Libya said in a statement that it is following reports that an armed group had ‘violently obstructed’ the functioning of a court in the city of Sabha in the southwest of the country.

Judges there are responsible for deciding on whether Seif al-Islam Gadhafi, the onetime heir apparent to his father, will be able to run for the country's top office, after he filed an appeal against a decision last week that barred him from taking part. The country's impending elections are the result of years of UN-led negotiations between the country's warring parties.

The UN also shared alarm at the treatment of judges, who in Sabha were ‘physically prevented’ from fulfilling their duties. It voiced further worry over a growing number of accounts of judges across the country being threatened, particularly those handling election-related cases. Candidates have a window of time before the Dec. 24 vote to file appeals related to their own candidacy or against other candidates.

Libya’s top electoral body last week issued a list of candidates who did not meet conditions to run for office; among them was Seif al-Islam, the son of and once heir-apparent to the late dictator. He was barred based because of previous convictions against him. The younger Gadhafi had been sentenced to death by a Tripoli court in 2015 for using violence against protesters in a 2011 uprising against his father, but that ruling has since been called into question by Libya’s rival authorities. He is also wanted by the International Criminal Court on charges of crimes against humanity related to the uprising.

The long-awaited vote faces other challenges, including unresolved issues over laws governing the elections, and occasional infighting among armed groups. Other obstacles include the deep rift that remains between the country’s east and west and the presence of thousands of foreign fighters and troops.

Adding to the concerns surrounding the election, the U.N.’s top envoy for Libya submitted his resignation last week, though he said he will stay on through the vote if needed.

Following the 2011 overthrow and killing of Moammar Gadhafi, oil-rich Libya spent most of the last decade split between rival governments — one based in the capital, Tripoli, and the other in the eastern part of the country. Each side in the civil war has also had the support of mercenaries and foreign forces from Turkey, Russia and Syria and other regional powers.

The son of Libya’s former dictator submitted his candidacy papers in the southern town of Sabha on Nov. 14. It was the first time in years that the 49-year-old, who earned a PhD at the London School of Economics, appeared in public. He had been captured by fighters in the town of Zintan late in 2011, as the uprising ended his father’s rule after 40 years. Seif al-Islam was released in June 2017.

The announcement of his possible candidacy stirred controversy across the divided country, where a number of other high-profile candidates have also emerged in recent weeks. Among them are powerful military commander Khalifa Hifter and the country’s interim prime minister Abdul Hamid Dbeibah.

Russia’s Foreign Ministry on Sunday rejected a British claim that Russia was seeking to replace Ukraine’s government with a pro-Moscow administration, and that former Ukrainian lawmaker Yevheniy Murayev was being considered as a potential candidate. Britain’s Foreign Office on Saturday also named several other Ukrainian politicians it said had links with Russian intelligence services, along with Murayev who is the leader of a small pro-Russia party that has no seats in the parliament.The U.K. government made the claim based on an intelligence assessment, without providing evidence to back it up. It comes amid high tensions between Moscow and the...
POLITICS・2 DAYS AGO
AFP

A right-wing nationalist party has won the majority of Turkish Cypriot votes in snap legislative elections in the breakaway northern region of Cyprus, according to provisional official results released Monday. The self-proclaimed Turkish Republic of Northern Cyprus (TRNC) -- recognised only by Ankara -- has been hit hard by the Covid-19 pandemic and the plummeting value of the Turkish lira. The National Unity Party (UBP) of right-wing nationalist Ersin Tatar, a close ally of Turkish President Recep Tayyip Erdogan, won 39.5 percent of the vote, strengthening its presence in the TRNC parliament by taking 24 out of 50 seats. As in 2018, the pro-Ankara UBP will have to form a coalition to govern.
PRESIDENTIAL ELECTION・1 DAY AGO
Newsweek

The Chinese Defense Ministry said joint drills "further enriched the connotation of the comprehensive strategic partnership of coordination between China and Russia in the new era."
POLITICS・3 HOURS AGO
fox46.com

UN official: Libya elections could be rescheduled for June

CAIRO (AP) — A senior U.N. official said she is pushing for Libya to hold elections by June after the county missed a December deadline to elect its first president since the 2011 ouster and killing of longtime dictator Moammar Gadhafi. Stephanie Williams, the U.N.’s special adviser on Libya,...
WORLD・8 DAYS AGO

UNITED NATIONS (AP) — The United Nations chief says over 12,000 detainees are held officially in 27 prisons and detention facilities across Libya and thousands more are held illegally änd often in “inhumane conditions in facilities controlled by armed groups or `secret’ facilities.” Secretary-General Antonio Guterres said in a report obtained Monday by The Associated Press that the U.N. political mission in Libya continues to document cases of arbitrary detention, torture, sexual violence and other violations of international law in facilities operated by the government and other groups. Guterres sais he remains “gravely concerned” by the continuing human rights violations.
UNITED NATIONS・8 DAYS AGO
AFP

Libya's parliament, in a push to replace interim Prime Minister Abdulhamid Dbeibah, on Tuesday published criteria governing candidates for the post. In a session with 120 MPs present, the parliament "approved the conditions to be met by candidates to head the next government", spokesman Abdullah Bliheg said.
WORLD・10 HOURS AGO
San Diego Union-Tribune

Joe Biden has said he will consider personal sanctions against Vladimir Putin if Russia invades Ukraine, as western leaders step up military preparations and make plans to shield Europe from Russian gas being cut off. The rare sanctions threat came as Nato placed forces on standby and reinforced eastern Europe...
POLITICS・23 MINUTES AGO

Jan. 24 (UPI) -- A top political affairs official with the United Nations told the Security Council on Monday that the path to stability in Libya "is through the ballot box, not the gun" after elections were postponed in December. Rosemary DiCarlo, under-secretary-general for political and peacebuilding affairs, spoke to...
WORLD・1 DAY AGO
The Independent

People in Burkina Faso awoke to a new military-led junta Tuesday, after mutinous soldiers ousted democratically elected President Roch Marc Christian Kabore and seized control of the country. Days of gunfire and uncertainty in the capital, Ouagadougou ended Monday evening when more than a dozen soldiers on state media declared that the country is being run by their new organization, the Patriotic Movement for Safeguarding and Restoration.“Today’s events mark a new era for Burkina Faso. They are an opportunity for all the people of Burkina Faso to heal their wounds, to rebuild their cohesion and to celebrate what...
POLITICS・20 HOURS AGO
Newsweek

In the ongoing conflict between Russia and Ukraine, Russian President Vladimir Putin’s eyes are on a bigger prize, a top expert on Putin and his country says. “This time,” writes former intelligence officer Fiona Hill in a New York Times op-ed, “Mr. Putin’s aim is bigger than closing NATO’s ‘open door’ to Ukraine and taking more territory — he wants to evict the United States from Europe. As he might put it: ‘Goodbye America. Don’t let the door hit you on the way out.’ ”
POLITICS・1 DAY AGO
Newsweek

Separatists in the Donbas region say Kyiv has built up military hardware as President Joe Biden seeks to present a united front against Russia.
POLITICS・19 HOURS AGO
Newsweek

The Ukrainian government says Russia has spread "a large amount of misinformation, manipulation and fakes" to sow panic among Ukrainians and foreigners.
POLITICS・1 DAY AGO
AFP

Soldiers in Burkina Faso on Monday announced on state television that they have seized power in the West African country following a mutiny over the civilian president's failure to contain an Islamist insurgency. A junior officer announced the suspension of the constitution, the dissolution of the government and parliament, and the closure of the country's borders from midnight Monday, reading from a statement signed by Lieutenant Colonel Paul-Henri Sandaogo Damiba. He said the new Patriotic Movement for Preservation and Restoration (MPSR) would re-establish "constitutional order" within a "reasonable time", adding that a nationwide nightly curfew would be enforced. Hundreds of people gathered to celebrate the military coup in Ouagadougou, welcoming soldiers, honking car horns and waving the national flag.
POLITICS・1 DAY AGO
AFP

Myanmar demonstrators who bang pots and pans in protest at last year's coup can be charged with high treason, the junta warned Tuesday, days ahead of the putsch's one-year anniversary. The February 1 coup ousted Aung San Suu Kyi's government and sent the Southeast Asian country into turmoil, with the economy in freefall and nearly 1,500 civilians dead in a crackdown on dissent. Almost a year on the junta is struggling to break resistance to its rule, with "People's Defence Forces" (PDF) clashing regularly with its troops in many areas. The military has declared all PDF groups, as well as a shadow "National Unity Government" (NUG) dominated by lawmakers from Suu Kyi's party, as "terrorists".
ADVOCACY・17 HOURS AGO
FOX40

Mutinous soldiers seized control of a military base in Burkina Faso's capital Sunday, raising fears of a coup attempt in the West African nation as gunfire rang out for hours amid growing frustration with the government's handling of the Islamic insurgency.
MILITARY・2 DAYS AGO
AFP

Yemen's Huthi rebels were expelled from a key battleground district by UAE-trained Giants Brigade fighters, the militia said Tuesday, a day after the insurgents' latest missile attack on Abu Dhabi. On Monday, the rebels renewed their attack on Abu Dhabi when two ballistic missiles were intercepted over the city, scattering debris.
MIDDLE EAST・15 HOURS AGO
WOOD TV8

Russia has denied it is planning an assault, but it has massed an estimated 100,000 troops near Ukraine in recent weeks, leading the United States and its NATO allies to rush to prepare for a possible war.
POLITICS・13 HOURS AGO
San Diego Union-Tribune

The United Nations chief says more than 50 million people are currently affected by conflict in urban areas from Afghanistan to Libya, Syria, Yemen and beyond where they face a much higher risk of being killed or injured
AFGHANISTAN・2 HOURS AGO