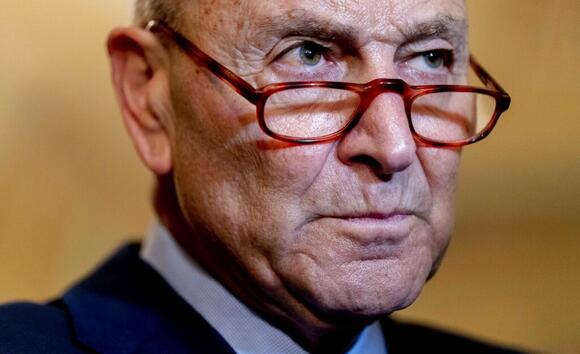 The annual National Defense Authorization Act has passed the Senate for 60 consecutive years, but GOP lawmakers stood in the way of advancing the massive measure Monday, refusing to provide the 10 GOP votes needed to begin debate. Just one Republican, Sen. Susan Collins of Maine, voted to get on to the measure.

In a speech ahead of the vote, Minority Leader Mitch McConnell, a Kentucky Republican, said lawmakers should consider an amendment, among others, to put sanctions on those involved in constructing the Nord Stream 2 natural gas pipeline to Germany that will ultimately benefit Russian President Vladimir Putin.

Majority Leader Chuck Schumer, a New York Democrat, has excluded that amendment at the request of President Joe Biden. Schumer blocked many other GOP amendments related to national security.

“Nothing less than the safety of the American people is at stake,” McConnell said. “This is more important than political timetables or partisan wish lists.”

The move could stall Schumer’s plan to pass a slew of critical legislation by the end of the year, beginning this week with the NDAA.

Congress must also pass an extension of federal government funding and an increase in the borrowing limit. By Christmas, Schumer said, Democrats plan to take up and pass Biden’s $1.75 trillion social welfare and green energy bill.

It’s not clear how the GOP's move to block the NDAA will affect the crowded schedule.

Schumer must now negotiate with McConnell to strike a deal on amendments that will pave the way for Republicans to vote to advance the measure, which sets spending level and policy for the military.

The NDAA vote had already been postponed after Republicans objected to considering the bill the week before Thanksgiving.

“We hope that Republican dysfunction will not be a roadblock to passing this bill and taking care of our troops and their families,” Schumer said Monday.

Schumer told reporters after the vote that he hopes Republicans will return to the negotiating table on Tuesday after the GOP's closed-door conference meeting.

He chastised Republicans, suggesting they are making unreasonable demands.

“When we've had bills like this, I've had to tell certain members, 'You can't get certain amendments,'” Schumer said. “Not everyone can have every amendment they want.”

A government shut down is the only practical way to stop biden tax and spend socialism. Defund the federal government!

..... And just like that, all the disingenuous libtards suddenly want massive defense spending.

if SUSAN COLLINS votes for the build black and mainly brown better bill....she is going to need some visitors!!

Republican leaders in Congress face another pressure campaign from conservative members to shut down the federal government and protest the remaining federal vaccine mandates.
CONGRESS & COURTS・13 HOURS AGO
WashingtonExaminer

Supreme Court Justice Stephen Breyer’s reported retirement this year set off a flurry of speculation on whom President Joe Biden could pick as a replacement, with many raising the possibility of Biden nominating his vice president, Kamala Harris.
CONGRESS & COURTS・7 HOURS AGO
Business Insider

"If all Democrats hang together ... they have the power to replace Justice Breyer in 2022 without one Republican vote in support," Graham said.
CONGRESS & COURTS・11 HOURS AGO

McConnell said he's heard "encouraging" things about what the Biden administration plans to do about the Russian invasion threat.
POTUS・1 DAY AGO
POLITICO

Unpacking some of the wildest theories of what the Biden White House may do with the looming Supreme Court vacancy. What happened: This happens almost every time there's a vacancy atop the nation's highest court, but let's walk through why some of the wildest ideas about the Supreme Court vacancy almost without a doubt won't happen.
CONGRESS & COURTS・10 HOURS AGO
Business Insider

Eyes will be on the two moderate Democrats, who have opposed some of Biden's key legislative priorities and will be needed to confirm his Supreme Court nominee.
PRESIDENTIAL ELECTION・10 HOURS AGO

WASHINGTON, Jan 25 (Reuters) - U.S. Senate Republican Leader Mitch McConnell, a frequent critic of President Joe Biden, said on Tuesday that he is seeing "encouraging" signs from the administration about its approach to deterring further Russian aggression towards Ukraine. McConnell said Biden now appears to be adopting the right...
FOREIGN POLICY・1 DAY AGO
The Guardian

President urged to make good on promise to pick Black woman to fill vacancy, with Stephen Breyer to retire as justice – follow the latest
PRESIDENTIAL ELECTION・6 HOURS AGO
Business Insider

The bipartisan letter comes after Pelosi reversed course, saying she's open to a ban. "If members want to do that, I'm OK with that," she said.
MAINE STATE・2 DAYS AGO
Business Insider

Hoyer noted that a stock trading ban for lawmakers would take away their "ability to make investments that we encourage in every other sector."
CONGRESS & COURTS・1 DAY AGO

Senate Democrats who have played defense for the last three Supreme Court vacancies plan to move swiftly to replace retiring Supreme Court Justice Stephen Breyer using the rapid 2020 confirmation of Justice Amy Coney Barrett as a new standard. Barrett was confirmed exactly a month after then-President Donald Trump nominated her to replace the late Justice Ruth Bader Ginsburg — and just five weeks after Ginsburg’s death in September of that year. Democrats sharply criticized that timeline then, arguing that most confirmations had taken much longer and that Republicans were trying to jam the nomination through in case...
PRESIDENTIAL ELECTION・11 HOURS AGO
Business Insider

Democrats are returning their attention to Biden's big spending bill after Manchin torpedoed it a month ago.
CONGRESS & COURTS・14 HOURS AGO
Urban Milwaukee

An attempt by Sen. Kelda Roys (D-Madison) to force a vote on a bill that would protect abortion rights in Wisconsin failed on the floor of the Senate Tuesday. Last February, Roys and other Democrats introduced a bill that would eliminate certain provisions in state law that state “any person who intentionally destroys the life of an unborn child” is guilty of a felony. This part of state law is currently unenforceable because of the protections provided by the U.S. Supreme Court’s Roe v. Wade decision.
MADISON, WI・14 HOURS AGO
POLITICO

The long-awaited bill tees up a flurry of corporate lobbying and intense negotiations with the Senate over final legislative language.
FOREIGN POLICY・1 DAY AGO

FIRST ON FOX: Rep. Ralph Norman, R-S.C., introduced a bill Tuesday that would prevent the federal government from tracking information on individuals who receive a religious exemption to the coronavirus vaccine. The bill comes after the Pretrial Services Agency (PSA) for the District of Columbia – a federal entity –...
CONGRESS & COURTS・1 DAY AGO
Tennessee Lookout

WASHINGTON — A bipartisan group of senators is exploring legislation to overhaul how Congress counts Electoral College votes, but backers of stalled voting rights legislation are lukewarm on the effort as a substitute. The Electoral Count Act is an obscure law that has come under recent scrutiny, a year after the Jan. 6 attack on […] The post With voting rights stalled, some senators mull an update to the Electoral Count Act appeared first on Tennessee Lookout.
PRESIDENTIAL ELECTION・2 DAYS AGO
Standard-Examiner

WASHINGTON — A combination of the COVID-19 pandemic and the Republican Party boycott of normal political engagement has brought to a halt President Joe Biden’s Build Back Better economic recovery agenda. A crippling freeze has settled in on the president’s aggressive and costly plan to combat destructive climate...
PRESIDENTIAL ELECTION・3 DAYS AGO